Brutal banter or total bulls--t? The myths and reality of the greatest Ashes sledges

Some years ago in an ancient time when there was media called “magazines” made from a thing called “glossy paper”, I was tasked by the editor of Inside Cricket magazine (what was that bloke’s name?) to conduct a study upon the veracity of those cricket “sledges” which still today ricochet around the Internet like digital Chinese whispers.

You know the ones: Javed Miandad calls Merv Hughes a bus driver, Ian Healy tells Arjuna Ranatunga he can’t have a runner because he’s had too many Mars Bars, that Zimbabwean tailender giving Glenn McGrath a biscuit. Or whatever.

Regardless, with a little research (ringing the yarns’ principles) they proved to be largely apocryphal (translation: largely bullshit) though the ones involving Merv were true and Viv Richards did tell a bowler from Gloucester what the ball looks like after he’d smashed him for six.

So here we are.

And let it be known: Jimmy Ormond remains the best cricketer in his family. And the owner of the best Ashes sledge ever.

The Sledge
Australia captain Bill Woodfull to his team after a fuming Douglas Jardine had appeared at the Australian team’s dressing room door: “Now, which of you bastards called this bastard a bastard?”

It happened … though according to Patrick Kidd in The Times it was Australia vice-captain Vic Richardson (the Chappell brothers’ granddad) who delivered the line in response to Jardine’s allegation that an Australian had called fast bowler Harold Larwood a bastard. “OK, which of you bastards called Larwood a bastard instead of this bastard,” Richardson, it is said, said.

The Sledge
Jardine: “All Australians are uneducated, and an unruly mob”

Happened. Jardine was no fan of Australian crowds who called him “Sardine”. When told he was not liked by Australians he replied: “The feeling is f***ing mutual.”

The Sledge
Rod Marsh: “G’day Ian. How’s your wife and my kids?”
Ian Botham: “Wife’s fine, the kids are retarded.”

Ian Chappell concurred: “I wasn’t playing in the 1977 series but Rodney would never have said that. We were always aware that references to wives, girlfriends, mothers etcetera were verboten.”

The Sledge
Mark Waugh: “What are you doing out here? No way you’re good enough to play for England.”
James Ormond: “Maybe so, but at least I’m the best player in my family.”

All hail the great one, Jimmy Ormond. 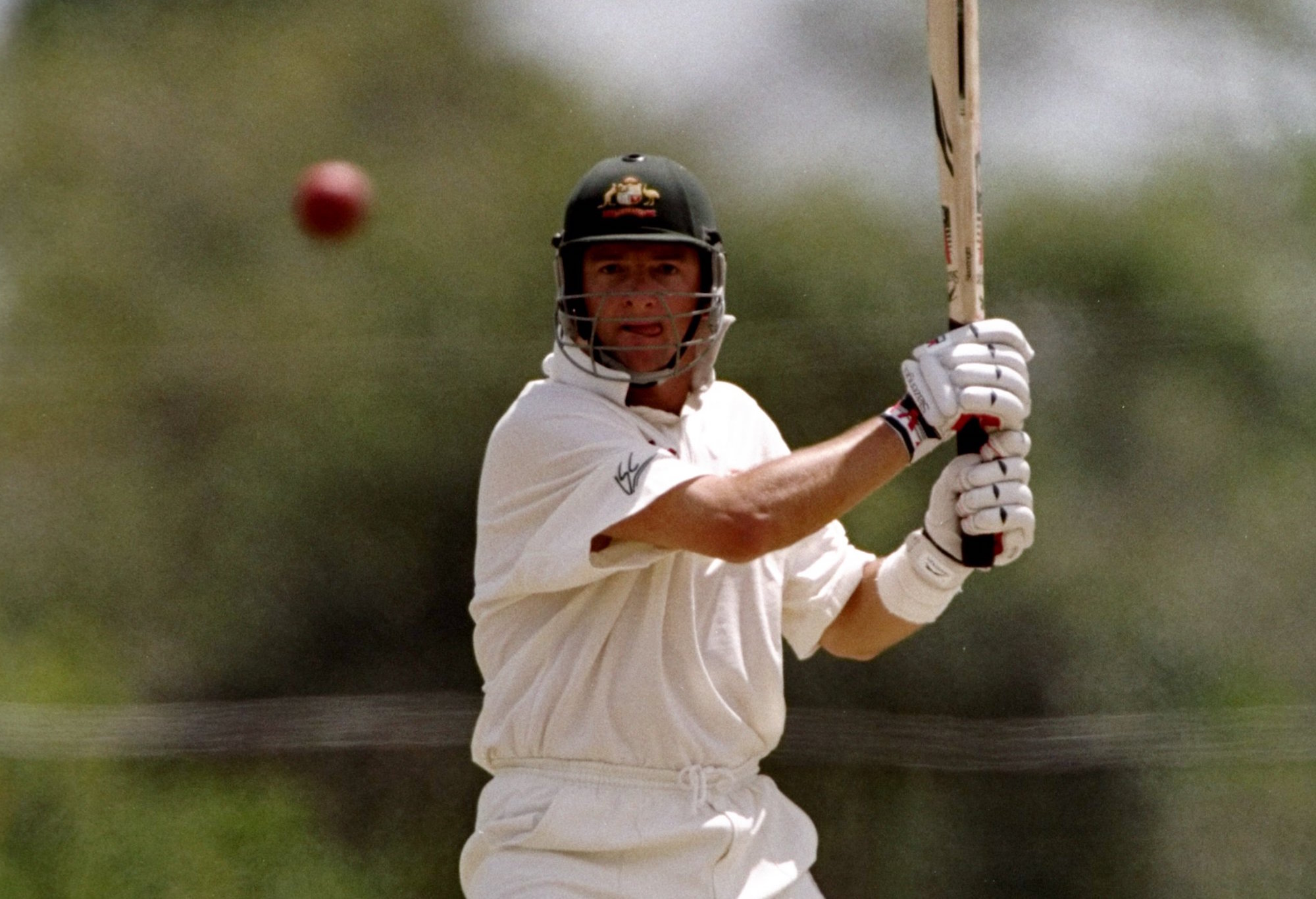 The Sledge
Shane Warne to Paul Collingwood: “You’ve got an MBE, right? For scoring seven at The Oval? You’re an embarrassment.”

The Sledge
Ian Healy to Steve Waugh as the unbeaten Graham Thorpe played a lone hand for England: “Watch this little prick play for a red inker.”

Fact – as Thorpe confirmed on the Wisden Cricket Weekly Podcast:

“We were eight down, I was 60 not out, and Ian Healy turned round to Steve Waugh who was standing at silly point, and he said, ‘Watch this little prick play for a red inker’. And I charged out of my crease trying to hit Shane Warne for six, and obviously I missed it, it hit the rough, and it was a great take. I said to myself as I walked off, ‘That’s never going to happen again’.”

The Sledge
After Steve Waugh moved Ricky Ponting into a fielding position “right under Nasser’s nose”, Ian Healy said: “That could be anywhere within a three-mile radius.”

A thing that happened. Not a bad one from Heals. (By the by, he never did call Arjuna Ranatunga a “fat [racist word] [rude word]”.

What happened was this: Healy was chastising Ranatunga for wanting a runner while batting. Ranatunga replied that he had a cramp. Healy said it was because he was overweight and unfit and thus should have a look at himself. “I told him he couldn’t have a runner for being unfit,” Healy told me. “He said, ‘I’ve got cramp’. I said ‘Yeah, because you’re fat. Have a look at yourself’. But that e-mail thing, it’s bullshit. I’ve never called anyone ever in my career a c-word or a coloured word. That’s not right.”

Healy said he also never tempted Ranatunga out of his crease with the promise of a Mars Bar on a good length. That statement, rather, was made towards a South African called Kosie Venter. So there you go.)

“During the first Ashes Test at Edgbaston I came on as 12th man while Nasser was batting,” recalled Langer. “I was chirpy and bubbly and said a few things to him.

“I didn’t hear him at the time, but it was reported he said, ‘Look, I don’t mind the others chirping at me, but you’re the f***ing bus driver of this team. So you get back on the bus and get ready to drive it home.’ I reckon Nasser had a point.”

Fact. Confirmed by Johnson in a column in The Telegraph: “Stuart Broad had a dig at me once when I was batting at the non-striker’s end … He tried to put me off my game – and I did not mind that, in fact I like it about the game. As long as it is not personal. Virat Kohli used to bite back a bit, Joe Root would smile, but Broad’s comments are about all the sledging I can remember in Ashes cricket.”

The Sledge
Merv Hughes had a well-earned repuation as a sledger but he was on the end of a brutal zinger from Ian Botham, that he later admitted fuelled his fire throughout his career..

It happened at the Gabba after Botham smashed him for a record 22 runs off an over and Merv approached Botham after the England allrounder’s 138.

Hughes recalls: ‘You probably don’t remember me,’ I said to him. ‘But I was at a coaching clinic you did at Benalla when you played grade cricket here in the 1970s.’

“‘Did I give you any good advice?’ he asked.

‘I told you I wanted to be a fast bowler, but you said I should take up tennis or golf because they were more enjoyable and better paid.’ He got up to leave, turned to me and said, ‘You should have listened to me’.”

The truth bomb that launched a thousand sledges.

Happened – indeed it was heard on stump microphone. The context was: Cameron Bancroft was on a night out in Perth with the West Australia team after a win over Tasmania. At the same pub were members of the England team who had just arrived for the 2017/18 Ashes series.

Bancroft told reporters that Bairstow had greeted him with “a headbutt kind of thing but without malice”. “I was expecting a handshake,” Bancroft said. “It wasn’t the greeting of choice that I was expecting and that was the way I took it. There was certainly no malice in his action and we continued on having very good conversation for the rest of the evening.”

A reporter asked if Bairstow apologised. Bancroft said: “Yeah, at the time he said sorry. For me, personally, it was just really weird. It was so random. I certainly didn’t expect it coming. A handshake or a hug would have been something I would have probably expected more than a headbutt … I don’t know Jonny Bairstow, but he says hello to people very differently to most others.”

The Sledge
More sledgehammer than mere sledge was the bitter banter directed at Jimmy Anderson by Michael Clarke in 2013.

“Face up then. Get ready for a broken f***en arm,” said a riled-up Clarke as Mitchell Johnson waited to bowl to the England tailender.

This incident, caught on the TV mics, was the low point in a particularly ugly series of sledges which included Dave Warner’s targeting of ‘weak’ Jonathan Trott.

Later, England spinner Graeme Swann managed to get a brutal dig in at Clarke as he recalled the incident.

“There was a minor furore about it at the time though I can bet you James would have forgotten about it within seconds.

“After all, we’re talking about easily the least intimidating of the Australians.” 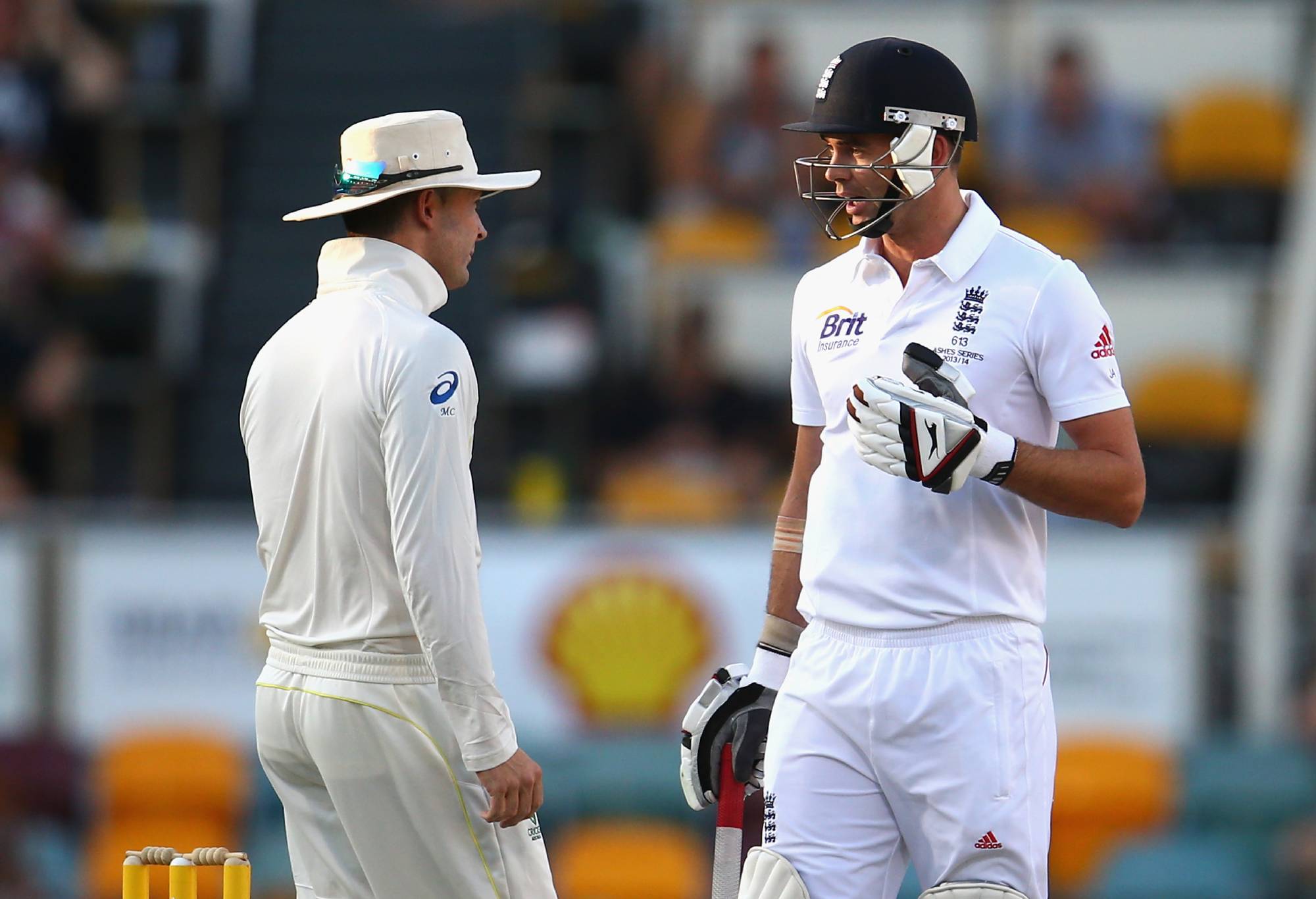 Clarke explained it this way: “I think it is because both teams want to win so badly. I respect that there is a line and both teams shouldn’t overstep that line.

“I think the rivalry and the banter on the field, it is give and take both ways. It is not one team dictating the other. It is about when you have momentum, run with it for as long as you possibly can.”

The Sledge
Tim Paine to British Press when asked if there was a more intimidating cricket ground than Edgbaston: “Than this? I could name you 15.”

Happened, bless it. And bless the Ashes.