The Champs are here! @gomvfc have shot out of the gates to start Round 1 in the @LibFinancial A-League.

Which match did you enjoy the most this weekend?#WeAreALeagues pic.twitter.com/kodFf1Vt0Q

For the first time in years, there was a new A-League Women’s team to get excited over. The Wellington Phoenix came into this season with the on-average youngest squad and very few hopes from pundits.

Due to the inexperience of the team, the short time frame in which they came together, and the challenges associated with navigating relocation, it was assumed that the Phoenix would give it a red hot go and not much else.

You’d be forgiven for thinking the team was actually playing in Wellington instead of Wollongong with plenty of wind and rain about. And considering all the expectations – or lack thereof – placed on this team, the fact that they ended the match with a point spoke volumes.

Lily Alfeld, the Phoenix captain, showed exactly why her teammates voted her to the leadership position and continued her form from last season, producing plenty of spectacular saves to deny the Western Sydney Wanderers.

The most pleasing aspect for Gemma Lewis and the most pleasant surprise for pundits and fans was that this game didn’t see the Nix simply absorb pressure and squeeze out a lucky point.

The team held its own creating some good chances, maintaining spells of possession, and looking quite solid in defence in parts.
It was only one game and the Phoenix will undoubtedly experience even tougher tests and be asked even harder questions. But if that is the base level, there is plenty to be excited about.

Grand finalists off to flyers

Last season’s grand finalists arguably put in the two strongest performances of the opening round. Sydney FC took a little while to find their groove but ultimately defeated the Newcastle Jets 3-1. The attacking trio of Cortnee Vine, Princess Ibini, and Remy Siemsen each found the back of the net with Vine also recording two assists.

The front three were lethal last season and have showed no signs of slowing down or letting up, signalling to the rest of the competition that they will once again terrorise defences.

Down in Melbourne, Victory got their title defence off to a blistering start with a 5-1 dismantling of Adelaide United. In a side that was without Melina Ayres – Victory’s top scorer last season – or loan signing, American striker Lynn Williams, the attacking prowess was a warning shot to the rest of the league.

It's two for Lia Privitelli, and FIVE for @gomvfc!#MVCvADL

But the scoreline didn’t tell the full story. It was a ‘keeper error which opened the scoring; Annalee Grove miscontrolling the ball allowing Lia Privitelli to poach. The goalkeeper redeemed herself almost instantly, saving Kayla Morrison’s initial penalty but was unable to prevent the follow up which doubled Victory’s lead. Claudia Bunge added a third from close range off a corner.

The thing was Adelaide weren’t being systematically outplayed. Casey Dumont in the Melbourne goal was required to make some great saves. Victory were simply more clinical with Catherine Zimmerman adding a fourth before half time.

Chelsie Dawber and Fiona Worts combined to see the Reds peg one back after the break before Privitelli was once again in the right place at the right time to seal with win.

Victory will take the three points but certainly didn’t have things all their own way. An injury to Morrison which saw her subbed just before half time and in tears could spell big trouble for Victory. Courtney Nevin was also subbed early as a precaution.

A Melbourne derby awaits next weekend.

The A-League Women has never been short of good stories. Round one of this new season was no exception. Across the country players returned to the pitch, marking important milestones and showing that football, as Arrigo Sacchi called it, is the most important of the unimportant things in life.

Rebekah Stott was an honorary member of the Matildas exodus, signing for Brighton in the English Women’s Super League. But her time overseas was cut short when she was diagnosed with Hodgkin’s Lymphoma and returned home to Melbourne. 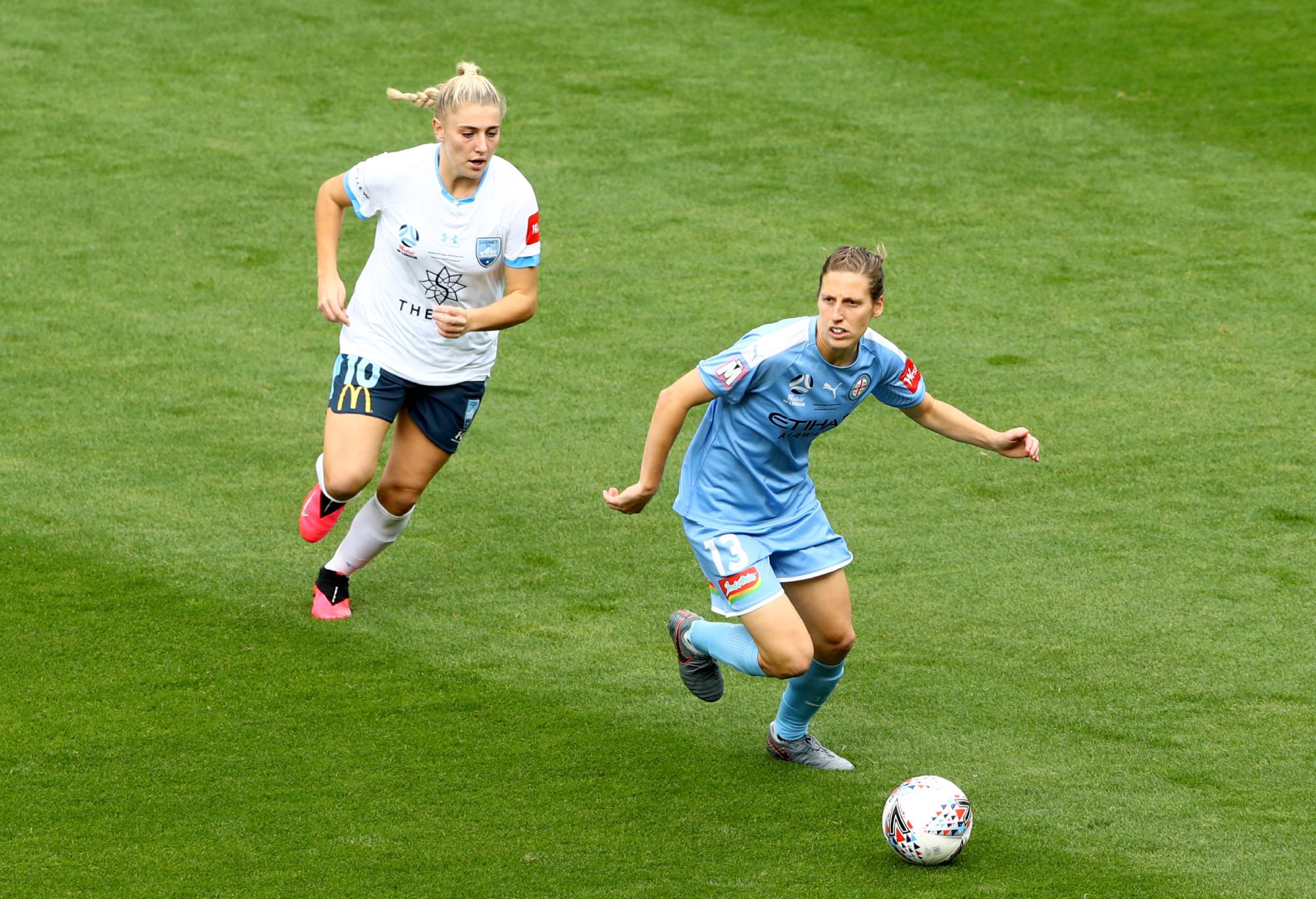 Rebekah Stott of Melbourne City makes a break away from Remy Siemsen of Sydney FC during the 2020 W-League Grand Final match between Melbourne City and Sydney FC at AAMI Park on March 21, 2020 in Melbourne, Australia. (Photo by Robert Cianflone/Getty Images)

“When kick-off comes around, it will be 135 days since I found out I was in remission, 294 days since my cancer diagnosis was confirmed, 348 days since I last played professional football and 622 days since I last represented this great club,” Stott wrote on her blog, beat it by Stotty before round one.

“There’s no doubt that within the past 294 days there have been moments when I thought this day would never come. Football was the furthest thing from my mind and physically and mentally I felt like I was a world away at times.

“I’m still a long way from the player I was, but I’m proud of being in a situation where I can play a role for my team on the field as well as off it as the season begins.”

Stott played an hour in her return to professional football and saw her Melbourne City side defeat Canberra United 1-0 courtesy of a Holly McNamara stunner.

A little further north there was another significant comeback, albeit with very different circumstances.

Katrina Gorry went to Norway to play football at the end of 2020 but to also start a family. The Matildas midfielder has been candid throughout her journey from undertaking IVF, finding out she was pregnant in quarantine, to pregnancy and giving birth to her daughter, Harper.

Gorry was subbed into the game with around 20 minutes to go, 110 days after Harper’s birth.

That these players can return to the pitch, surrounded by support both on and off the field says plenty. Theirs are the kind of stories
which make football richer.

Perth’s 2-1 win over Brisbane Roar was an important milestone victory for Alex Epakis and the Glory. It was his first win as Glory boss and the team’s first three point haul since February 22, 2020.

This season was always going to be crucial for the team from out west. It was poised as a more accurate reflection of what Epakis as a coach could do. With a blend of youth and experience, the Glory showed grit and determination.

Whereas last season they may have struggled to find answers, particularly in front of goal, in round one they created chances and their own luck to help cancel out Anna Margraf’s opener.

Gemma Craine who missed most of last season through injury was hell-bent on proving her worth going on the run and providing the assist for Susan Phonsongkham for goal number one. It also her pressing which led to the own goal and the three points. Having already tripled their points haul from last campaign, watching this Perth side grow and develop will be one of the subplots of the season.