Check out what Parramatta fans Andrew and Matt had to say about supporting the blue and gold.

This week, the Canberra Raiders.

The pride of the nation’s capital since 1982, The Green Machine have been a strong and exciting club, producing many superstars, as well as an Immortal in Mal Meninga.

2021 did not go well for the Raiders. After frustrations on the field and dramas off it, their loyal supporters are hoping for a better 2022.

I spoke with two of those supporters, Tim and Chris.

Tim is a fellow Roar writer and one half of the podcast Raiders Review with Blake and The Pork.

“We started back in 2016, and here we are looking at hitting 100 episodes this season. Our podcast has a number of segments, and we have the best title music, made specially by die-hard Raiders fan Denis ‘that’s in Queensland’ Carnahan.”

And Chris is ‘The Man in the Green Suit’ you always see in the Canberra crowd.

“It all started about ten years ago. A friend and I were walking past a Lowes store, and they had a range of suits up. My friend suggested I should see if they had one in lime green, and the suit was born. I do it because I want to show my support for my team.”

Now, down to business.

After many public issues with players over the years, I was interested to see if the guys feel there is a culture problem at the Raiders. 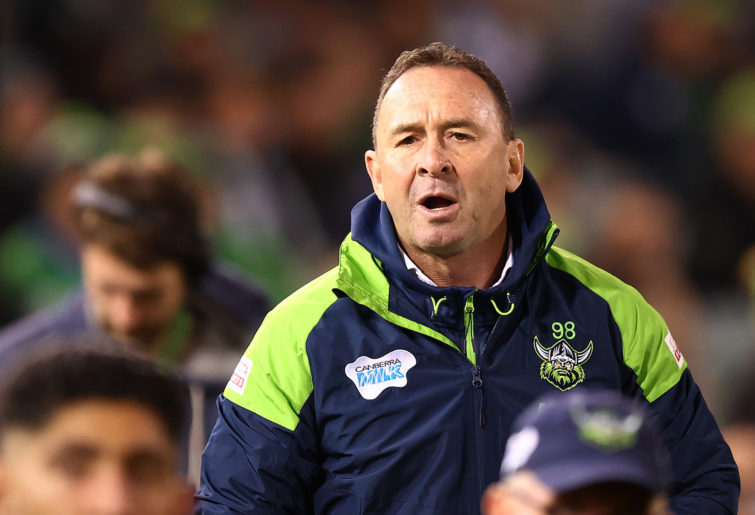 “I honestly don’t think so,” Chris tells me. “I think that the incidents that have occurred in the last couple of years were cases of young men with money and spare time, who happen to make wrong decisions. We aren’t the only club who have had these issues and we won’t be the last.”

Tim agrees: “We had distinct issues with Todd Carney, Josh Dugan, Blake Ferguson, then a bit with Curtis Scott.

“But for the most part, this is the most family-friendly dressing room I’ve seen. The culture issue line is propagated by journos whose closest interaction with our club and players is via player managers.

I asked what the best and worst parts were about being a Raiders fan.

“The best thing,” Tim begins, “in general, the club is one without bad stain or reputation. While there are certainly lumps and bumps, for the most part the team, the staff and the supporters are decent humans.

“The worst, being a poor country cousin. Only Canberra (and Goulburn, Yass, Cooma and Queanbeyan) cares about Canberra. Our injustices and robberies we experience are too often written off as ‘you woulda lost anyway’. And maybe sometimes that’s true.

“But hearing it from Roosters fans, for example, isn’t fun.”

“The way the city gets around the team when they are going well,” adds Chris.

“During the 2016 and particularly the 2019 finals series there was a buzz around the town. Cars were decorated, businesses did up their shopfronts. A butcher in Queanbeyan made green sausages, and a bakery in the south of Canberra made green loaves of bread with the players’ names on them.

“The worst part is how the team – unintentionally – plays with your emotions. Back when David Furner was our coach we would be leading at halftime, most times by double digits, and we would end up losing. This unfortunately led to us being labelled the ‘Canberra Faiders’.

Following on from Chris’s last comment, I asked what they thought went wrong this season.

“I think the biggest problem we had this year, that played a part in us missing the finals, was our No.7: Matt Frawley,” Chris replies.

“He has a good short kicking game, but he doesn’t have a spark in general play. Sam Williams can control a side but also misses that punch. This had an impact on Jack Wighton, who then can’t play his own game as he is picking up the slack of his halves partner.

“We play our best football when Jack has a 7 he can trust, and that leaves him to play his own game.” 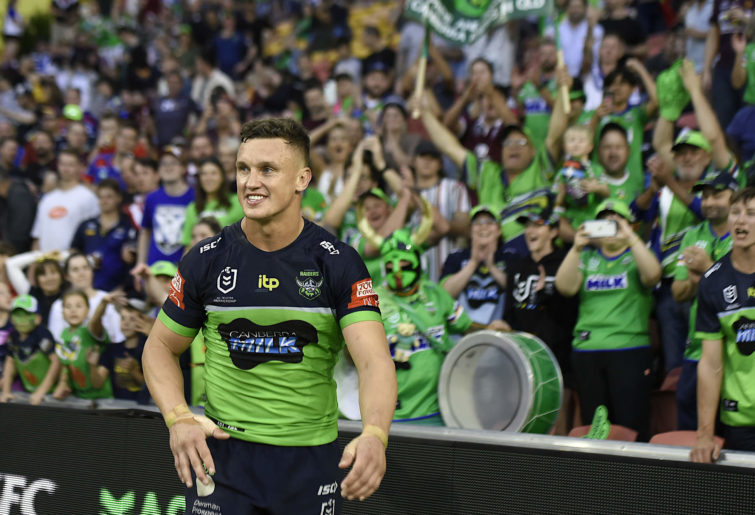 “Not much ever has to go wrong,” Tim adds.

“But we had a few things hit simultaneously.

“The rule changes and ‘six-agains’ did not suit our team as it had been built.

“The injury to Charnze Nicoll-Klokstad was massive in how it affected the whole team set-up. We went from having a really good defensive set-up that we used as a springboard to grind out games, to having a makeshift backline.

“George Williams agitating for release and subsequently getting an immediate release was a massive disruption. Player managers don’t support clubs and don’t prioritise their welfare.

“The poor results led to a few understandable, yet unfortunate, flare-ups.

“Then, as all clubs have, there were instances of bad luck, injuries, and calls. That we were one win out of the finals wasn’t too bad, considering all of that.”

Touching on the topic of George Williams, I asked what they thought about the Williams and John Bateman dramas.

“Both situations were inflamed by player managers,” Tim says.

“Both had several unfortunate issues. I think both were handled well. The club certainly sent out a strong message to all those agitating for release from the Raiders, that you might get it a lot sooner than you bargained for – or wanted.” 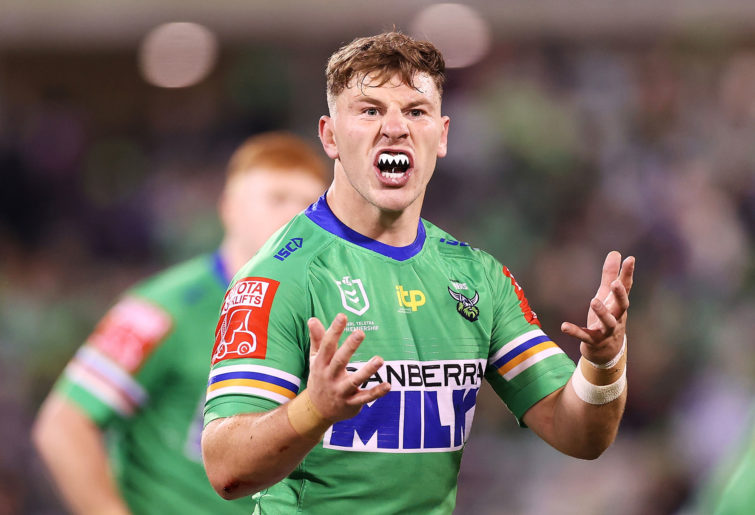 “With Bateman,” Chris adds, “the major factor was his daughter. In 2019, pre-COVID, they could both travel back and forth freely and that’s when he played his best footy for us. In 2020, restrictions on travel meant they couldn’t see each other, and I believe that had a major impact on his mental state.

“Not being able to see his daughter was a major reason for him wanting to return to the UK. Enter the manager to start spreading stories through the media.

“The situation with Williams I believe is purely to do with his manager. George came to us at a bargain price, and by the time he left he was on quite a bit more. I understand that it’s his manager’s job to get the best for his client, I just feel that he did it without respect to the club and the supporters.

“I think the club handled it as well as they could, and while I was upset to see them go, I stand with the club.”

Moving on to team signings, Chris has mixed feelings about Adam Elliot.

“When he’s on his game he is a quality player, and he will add some more depth to our forward pack. The thing that does concern me is his off-field incidents.

“If we are signing a player who then has an incident that is one thing, but to sign a player with three incidents in as many years makes you ask if it’s it a case of wrong place, wrong time, or is he the common denominator? I guess time will tell.”

“I hope he straightens up, flies right and plays well,” Tim adds. “The Raiders have made it clear that if he transgresses that he’s straight out. And they’ll stand by that.”

But they are both very happy about Jamal Fogerty joining the club.

“I’m excited to see Fogarty in the lime green,” Chris declares. “A young, exciting, attacking halfback paired with Wighton, behind a big and mobile forward pack.” 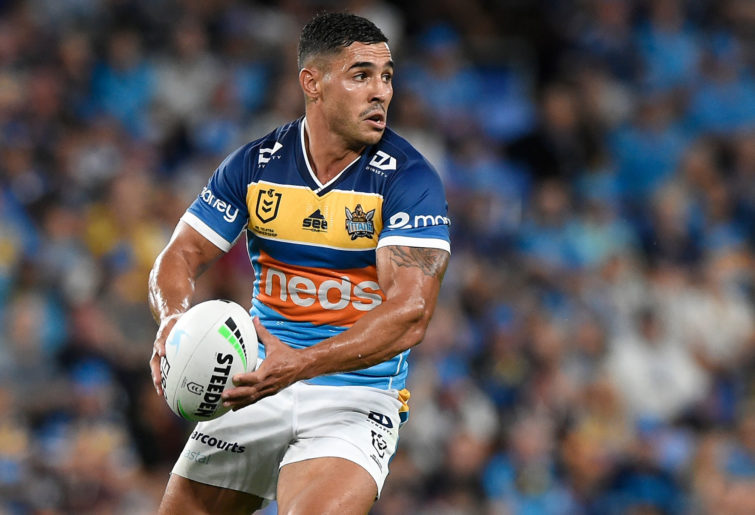 Tim adds: “When the Titans poleaxed us this year, Jamal was magnificent. And he’s a good bloke.”

Looking to the future, is Ricky Stuart the right man to coach the Raiders?

“The only people saying otherwise are voices outside the club. Ricky has taken us from almost bottom in 2014 to a grand final appearance and two prelims. He is of the club and is well credentialled. He has built this team.

“He’ll get no credit for anything he achieves because so many just want to blindly hate on him and react with glee when he hits rocks. All those people don’t put up any decent alternatives either – they don’t care about the fortunes of the Raiders.

“The noises within the club and fan-base for his removal are insignificant. And Ricky will know when it is time to go.”

“I stand with Sticky as the man to bring us back to the promised land. He truly has a passion for the club that few other coaches have. He has bled green for this club. He knows what it means to be part of this club, and what the club means to the community. He is one of us.”

I asked who their favouite player was, past and present.

“When it comes down to it, I’m a Ricky Stuart man,” Tim says.

“I loved Steve Walters and Brad Clyde, too. But it is Ricky who was my favourite. My favourite player now is Josh Hodgson. On and off the field, I love him.”

Chris’s favourite player from the past is Ken Negas.

“I used to love watching him stride down the wing. He looked like he was only ever running in third gear, so as a defender got close, he would switch up a couple gears and the defender had no chance.

“Current player is Josh Papalii. Just the way he has taken his game to the next level in the last couple of years has been amazing to watch. The tries he scored against Melbourne and Souths in the 2019 finals series are part of Raiders folklore.”

And finally, if they could say anything to the team, what would it be?

“If you make a mistake, don’t drop your head, just make your next effort something that you can be proud of.”

Tim was straight and direct.

Sage words of advice from the guys. And with sage of course being green, they may just be the most perfect words the Raiders could hear right now from their fans, to gear them up for a big 2022.