Expansion comes in many forms. For Australian rugby, it will mean development from within, via an NRC-type tournament sitting underneath the Super Rugby tier, and stronger connection with the grassroots at the amateur club and school level, where rugby is taught to aspiring athletes.

It can also come from without, by the remote management of players playing away from home, mainly in Europe or Japan.

The first step in that process is identifying where your players can really fast-track their education. In future, it may also occur more concretely, via organised exchange and loan schemes between Australian and European clubs of quality.

The bottom line is that if some Australian players are (inevitably) going to leave home shores, it has to be preferable for them to go to clubs where the culture and playing practice teaches them skills they can bring back. Then they will truly be returning home, and come back bearing gifts.

Some of these unofficial ‘centres of excellence’ are already well established, particularly in the UK.

For several years, the Exeter club in the south-west of England has been a flag-bearer for Australian players abroad. Over the last seven seasons, the likes of Greg Holmes, Dave Dennis, Dean Mumm, Ollie Atkins, Julian Salvi, Mitch Lees, Nic White and Lachie Turner have participated in the give-and-take of a special environment at Sandy Park.

Several Aussies have given some insight into the attractions of deepest Devon. Here are just some of the testimonials:

“For me the decision was easy after five minutes of speaking to [Exeter director of rugby] Rob Baxter.”
– Lachie Turner

“I have never shied away from saying that my time in England with [Exeter] Chiefs certainly turned my whole career around. I felt like I was plateauing and my time with the Chiefs certainly helped me go to the next level with my game and re-ignited my international career.”
– Nic White

“He [Dean Mumm] is a pretty honest guy and he couldn’t speak highly enough of his time at Exeter… It was a great achievement from Dean to come back [into the Wallabies] and I definitely thought he’d developed as a player.”
– Dave Dennis

“These past four years have been amazing and this is a very special place to not only come and play rugby, but to live in and be part of a special rugby community. Some of my fondest rugby memories have come from my time here in Exeter and I’m just so glad I’ve been able to experience what I have – and be a small part in what has been a successful period for the club.”
– Greg Holmes 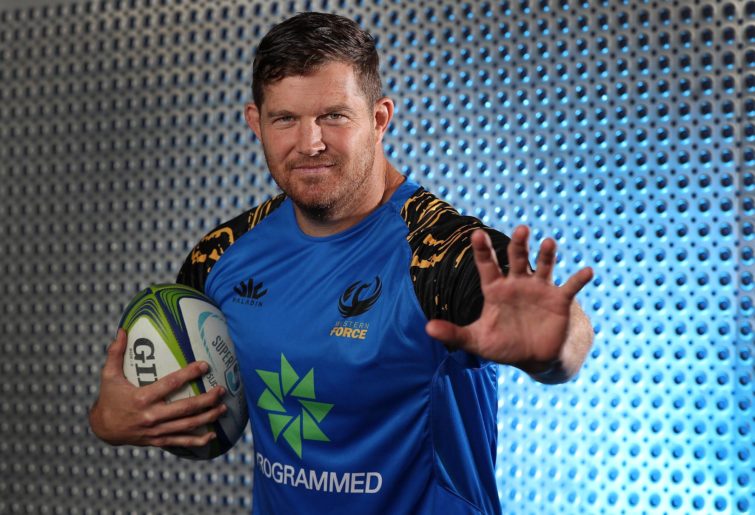 Lees could not get a Super Rugby contract but advanced to the fringes of the England squad at Exeter, while Atkins was capped by Scotland despite playing largely from the bench for the Waratahs.

Dean Mumm had dropped out of international contention, but on the back of his three seasons at Exeter he played a role in the 2015 World Cup final. Nic White had been written off as a Wallaby, but returned home to become the premier halfback in the country before the following World Cup in Japan.

Rob Baxter himself sees the ‘contract’ in the simplest of terms: “The important thing for me when we sign a new player is that there’s a genuine feeling that we can improve them as a rugby player, and that the player wants to improve as a rugby player.”

While Baxter now has his newest project, Western Force second-row Ryan McCauley, firmly under his wing on a short-term deal, the Australian centre of excellence has moved steadily away from Devon and towards the outskirts of West London, to the London Irish club.

Irish currently have five big Australian players on their playing staff – Adam Coleman, Rob Simmons, Ollie Hoskins, Nick Phipps and Curtis Rona – and until 2020 they had Sekope Kepu and Dave Porecki in the front row. Porecki has since returned to NSW and the wider Wallaby squad, while Kepu will represent the new Moana Pasifika franchise at the ripe old age of 36 in 2022.

London Irish are one of the fastest risers in the English Premiership and currently lie seventh in the table. Arguably they have shown the most improvement of any club bar Leicester Tigers during the current season.

A couple of weekends ago they beat champions Harlequins in a pulsating, edge-of-the-seat thriller, and their Australian imports had a powerful influence on the outcome.

Probably the only Australian disappointment for Irish, both in terms of the game itself and the overall impact of the signing, has been Adam Coleman. The ex-Force and Rebels second row came to the UK in his playing prime but still has the disciplinary brain-fades and long injury breaks which have bedevilled his career:

If there is one item on your menu as a defender in the English Premiership, it is ‘if you cannot win it, allow the tackle ball to be played immediately’. If you don’t, the referee will have no mercy at all. But Coleman repeats the same offence in exactly the same way, and three minutes after the second example he was off the field for good with an injury.

His partner in the row, Rob Simmons, is meanwhile merrily trucking along at the age of 32 and putting in quality performances week in, week out:

This is Simmons at the heart of the physical donkey work – winning lineout ball with the aid of a block by Coleman, and then turning to lead the drive through the defensive wall for the try. If the receiver can turn and face the opposition goal-line, it is always a big red flag for the defence.

The second instance shows Simmons doing something many Wallaby watchers consider impossible, bouldering a huge defender (Springbok centre Andre Esterhuizen) out of the ruck contest with aggression and sheer brute force in the 70th minute of the match.

But the real star of the show from an Australian point of view was Curtis Rona at outside centre. Rona has formed a more-than-useful partnership with South African Bernhard Janse van Rensburg in the Irish midfield, and he had an important hand in most of the game’s turning points.

Rona has added some muscle mass, which has clearly added stickability and made him a defender to be reckoned with over the tackle ball. He made three steals on the deck during the course of the game, two which were critical to the overall outcome:

The first is triggered by a big tackle from van Rensburg and occurs with Irish under pressure deep within their own red zone. Rona runs all the way from a start-point beneath the posts to reach the left 5 metre line and effect the turnover.

In the second example, Quins were pressing for a game-winning score in the dying embers of the match before Rona intervened to secure the win. Add in a counter-ruck lead on the side-line, a chop tackle in midfield and a dominant fumble-forcing hit which resulted in three more turnovers, and you have a significant defensive contribution by the ex-Waratahs number 13.

On attack, Irish have recognized the deftness of Rona’s hands in traffic:

Anyone who can drop off a no-look pass like that off his left hand needs time on the ball at first receiver – and that is what Rona gets from the Irish coaching staff:

More sleight of hand in the 10 channel creates width for van Rensburg out on the right, then a perfectly-timed long delivery off his left hand allows Simmons to bullock his way down the sideline for the crucial go-ahead score.

Summary
The question of how development can best occur in most of the top-tier rugby nations is now two-fold.

On the one hand, there needs to be a domestic structure which connects with the grassroots and is capable of developing top-grade international players at the highest level of the game.

On the other, players who move overseas have to find environments that will either help them flourish and reach the top of their talent (Europe), or give them a proper rest (Japan).

Settings like those at Exeter in England’s West Country are at a premium, because they are guaranteed to return more complete and rounded products. Ask Nic White, Dean Mumm or Greg Holmes.

In the English Premiership, London Irish is threatening to overtake Exeter on the Australian-import conveyor belt, and there are already some signs that they will be able to improve at least some of those that come to West London.

If those relationships can be formalised via loan or exchange schemes or sabbaticals, it will be to Rugby Australia’s great advantage. They will be able to release top players knowing that they will come back better than before, within a set time frame and temporarily relieved of the salary burden.

If doubts exist, it is also great way of discovering how those players react in a new, foreign environment, and find their character.

Some, like Curtis Rona succeed, and Rona would prove to be an able back-up for the likes of Len Ikitau right away.

Others, like Adam Coleman, may fall by the wayside or simply tread water in their development.

It is a time for Australia to maximise its resources and squeeze every last drop of juice it can out of the word ‘development’.