The Roar
8th December, 2021
18
Join the conversation
1682 Reads
Advertisement
Write for The Roar

Pat Cummins answered the critics who questioned whether a fast bowler should be captain in the best possible fashion on his first day as Test skipper.

Cummins took 5-38 from 13.1 overs as he led the Australian attack in rolling England for 147 inside two sessions at the Gabba.

Although he didn’t win the coin toss to start the day, it proved a good one to lose as opposing skipper Joe Root opted to bat and the tourists fell like a house of cards.

He brought himself into the attack as soon as Root came in after the second wicket and Josh Hazlewood dismissed the visiting captain for a duck, Cummins struck to remove star all-rounder Ben Stokes for five.

Cummins mixed and matched the bowlers at regular intervals and was rewarded with regular wickets, including young all-rounder Cameron Green chipping in with Ollie Pope to support the front-liners in his three-over spell.

He wasn’t afraid to bring himself back into the attack when required and picked up Haseeb Hameed’s wicket after deciding to take the first over after lunch.

Cummins completed a memorable first day in the field as skipper when he cleaned up the tail, removing Ollie Robinson, Mark Wood and Chris Woakes.

He became the first fast-bowling captain to take a five-wicket haul in Australia since Courtney Walsh did so for the West Indies in 1997.

“He was outstanding. I thought Pat Cummins led by example, I think he did well with the captaincy,” spin king Shane Warne said on Fox Cricket.

“I thought he got the bowling changes right. The catching was good for the Aussies, they just bowled the right length, I just thought they were on and I thought the standout for the day was Cummins, rewarded with his five wickets, knocked off the tail pretty nicely too.

“Great to see Pat Cummins hold that ball aloft and take five-for on his first day as Australian captain.”

“Pat Cummins got the reward with five wickets but was well supported by Mitchell Starc, Josh Hazlewood and Cameron Green just a couple of overs there with Nathan Lyon.”

Australia have historically shied away from picking a fast bowler as Test captain and there was speculation that Steve Smith may be recalled to replace Tim Paine after he resigned due to the recent sexting scandal.

Shane Warne has again hit back at his growing army of critics and revealed he’s thrashed it out with Steve Smith in the wake of his criticism of the Test batter’s recall to the vice-captaincy.

Warne has been outspoken about Australia’s decision to reinstate Smith into a leadership role as Pat Cummins’ deputy for the first time since he resigned following the Sandpapergate scandal in Cape Town in 2018.

“I spoke to Steve Smith. We messaged and he said ‘gee you’re a bit harsh on me, aren’t you?’ We talked it out and that’s what respect does,” Warne revealed on Fox Cricket on day one of the First Ashes Test at the Gabba.

“Just because someone doesn’t like your opinion it doesn’t mean they have to get nasty and personal or anything about it. Everyone’s allowed to have their opinion.

“I was happy that Steve Smith contacted me because I consider him a friend. We’ve worked together at the Rajasthan Royals, I used to work with him when he was bowling, when he was a leg-spinner, a long time ago. We’ve got a respect for each other and it was nice of him to actually ring me and say mate why did you think that.

“And I told him my point of view and he said look I understand it and I’m sure a lot of other people have that view too but it doesn’t mean we don’t like each other.

“We still respect each other and I like Steve Smith, how could you not? He’s a great guy, he’s one of the best Test batsmen in the world, if not the best in the Test arena.

“Someone shouldn’t be personally attacked for having an opinion just because you don’t agree with it.

“He said you’ve been in the game for 30 years, you’ve earned the right to have your opinion and I respect it. I just don’t agree with it, but that’s OK.”

England have been lambasted for their shock decision to leave James Anderson and Stuart Broad out of their line-up for the First Ashes Test.

The tourists have 1156 Test wickets sitting in the Gabba pavilion after omitting Anderson (632) and Broad (524), with commentators Shane Warne and Mark Waugh saying they were perplexed by England’s selection policy.

Chris Woakes, Ollie Robinson and Mark Wood, who are either untried against Australia or have had limited success, along with spinner Jack Leach and all-rounder Ben Stokes will be their bowling attack.

As if going into the Test without your two record-breaking bowlers wasn’t bad enough, England’s top order then collapsed to be 3-11 inside the first hour of the series, including Rory Burns being bowled from the opening ball of the match from Mitchell Starc.

“I would have been the complete opposite to what England have done – I would’ve liked to have seen Broad and Anderson play the first two Tests, with that match-up with [David] Warner, try and get the wood on Warner early, try and go one up in the series, especially at the Gabba and then start if you need to rotate after that,” Warne said.

“Rather than the other way – rest them for this one. Play in Adelaide, day-nighter and see where we’re at.

“I’m just not sure of that thinking. I would have liked to have seen them hit Australia with their best two in conditions that you can see are bowler friendly and then you’ve got the pink ball day-nighter. It makes sense that the first two Test matches are the ones you go after the Aussies.”

Waugh also thought it was a negative move by Joe Root’s squad.

“For them to win this series they’ve got to win one of the first two Tests. Adelaide and the Gabba were their two best chances looking at the fixture list,” he said.

“I am shocked. The first Test is so important with the momentum and getting off to a good start.

“These two guys have 1156 wickets between them. You think one of the two would play. Now none of them are playing. That is a big call to make by the selectors.”

England skipper Joe Root defended the decision to leave Broad and Anderson in the sheds at the toss.

“We are blessed with a very good seam attack and it was a difficult decision to make,” he said.

“There’s five Tests and it’s important they’re ready to go when called upon at any time. 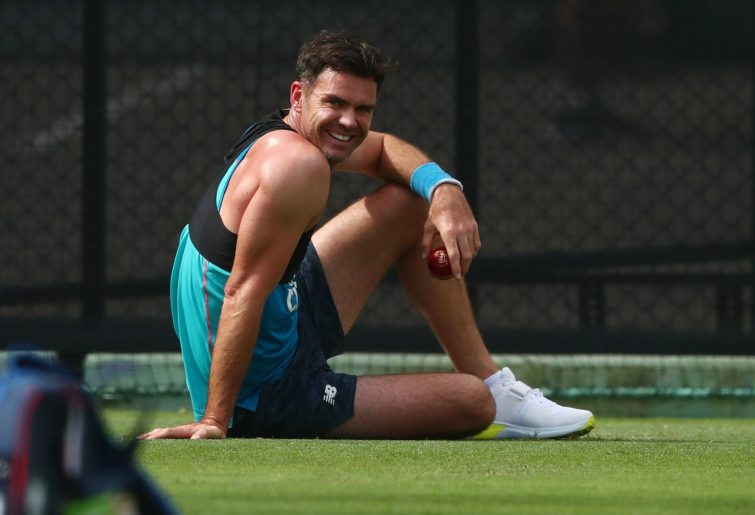 
“We have prepared and planned really well. We’re grateful to get the opportunity to play a series like this and we want to make the most of it.”

“I can’t catch my breath, it’s unbelievable not to select Broad. The Australians left-handers must be jumping for joy. I can’t understand when the spinner will bowl. It’s green with rain delays likely,” he said.

Former Australian skipper Allan Border said the omission of Broad and Anderson was “a huge gamble”.

“I think you should be playing your best team first up. The conditions are perfect for someone like Jimmy Anderson,” he said on Fox Cricket before the toss.

England’s brittle top order was exposed on day one of the Ashes at the Gabba with Rory Burns earning the unwanted title of the king of the ducks for opening batters.

Burns was bowled around his legs by Mitchell Starc off the first ball of the match in a horror start for the tourists.

It was his sixth duck for the calendar year, the first time an opener has achieved the unwanted feat – India’s Pankaj Roy in 1952 and former England skipper Michael Atherton in 1998 were the only other players who have amassed five at the top of the innings.

His first-ball dismissal was also the first time someone has been dismissed from the first ball of the series since England’s Stan Worthington in 1936, who was caught behind by the legendary Bert Oldfield off Ernie McCormick.

It was only the fourth time a batter has been sent packing from the first pill in any Ashes Test with England’s Archie McLaren (1894) and Australia’s Warren Bardsley (1926) also suffering the same fate. 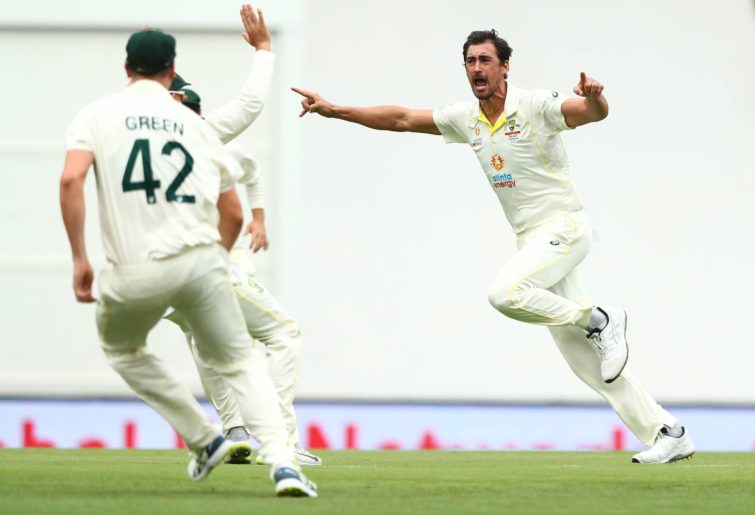 Mitchell Starc of Australia celebrates dismissing Rory Burns of England during day one of the First Test Match in the Ashes series between Australia and England at The Gabba on December 08, 2021 in Brisbane, Australia. (Photo by Chris Hyde/Getty Images)


Burns was quickly joined in the Gabba visitors’ sheds by Dawid Malan, who nicked Josh Hazelwood to give debutant keeper Alex Carey his first catch in Test cricket, for six.

Hazlewood then delivered the hammer blow by catching the edge of Joe Root’s bat and David Warner pocketed the catch at first slip to send the skipper off without scoring to leave England teetering at 3-11.

Pat Cummins celebrated his first Test as skipper by making it 4-38 in the 13th over when he snared the vital wicket of Ben Stokes for five when he edged to a diving Marnus Labuschagne.

Cameron Green took a step towards becoming the all-rounder that Australia have desperately been seeking when he broke through for his first Test wicket at the Gabba.

Green broke his wicket-taking drought in his fifth Test when Josh Hazlewood latched onto a spectacular diving catch at fine leg to remove Ollie Pope for 35 and reduce England to 7-118.

The 22-year-old West Australian sent down 41 overs across four Tests in the home series against India last summer without success.

Fox Cricket commentator Kerry O’Keeffe was impressed with Green but added with a trademark laugh, “sadly his Test bowling average is now over 100 – there’s a downside to getting your first Test wicket.”

“This is a big plus for Pat Cummins. Last year Tim Paine had to keep bringing back Starc and Lyon because Green was wicketless. If he can chime in with some timely wickets this summer, he doesn’t have to recall the other bowlers – it’s a big plus if Green continues to get poles,” he said.

Cummins was ruthless with his bowling changes, though, removing Green from the attack the next over to bring Hazlewood back on in a bid to clean up the tail.

The skipper did, however, name Green’s wicket as his favourite moment from England’s innings.

“I’m going to go Cam. He’s so polite,” said Cummins. “He walked in and I said how good was that to get your first one and he goes ‘sorry I probably over celebrated’. I’m like ‘there’s no such thing’. So really happy for that.”