Travis Head pounded a counter-punching century after David Warner’s luck ran out and fell short of a ton as Australia took an iron grip of the opening Ashes Test against wounded England at the Gabba.

Head responded to uncertainty over his Test spot to bludgeon an 85-ball hundred inside the final session to put the Australians in a powerful position with a 196-run innings lead after the second day where England struggled with injuries to key bowlers under the hot Brisbane sun.

At stumps, left-hander Head was unbeaten on 112 with Mitchell Starc on 10 and Australia at 7-343 after skittling England for 147 on the opening day.

Australian Test legend Mark Waugh said he felt the game would be all over in Australia’s favour on day three.

“I think this game will be over tomorrow,” said Waugh on Fox Sports. “The pitch has still got plenty in it – you get good fast bowlers on that…”

Head reached his third century in his 20th Test and first against England after Warner rode his luck only to fall just short of a hard-fought century. 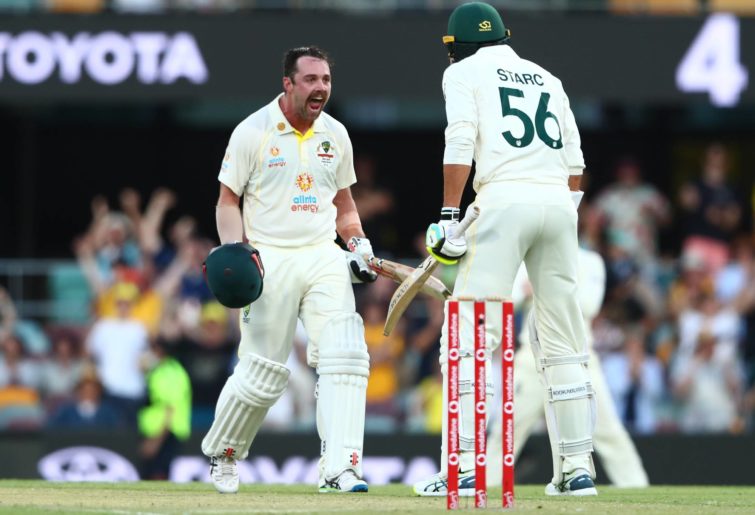 Warner survived the second day’s much talked about big moment on the fourth ball of Ben Stokes’s opening over when he was bowled middle stump off his back pad when he was on 17.

Warner was on his way but was called back after replays showed Stokes had significantly over-stepped for a no-ball much to England’s chagrin at missing out on a prized wicket. Warner has now been bowled six times from no balls in this Test career.

In fact, television replays showed that Stokes had over-stepped on all three of his previous deliveries in the over and had not been called by either the on-field umpire or the third umpire.

It was subsequently reported that a technological failure was to blame with the technology crashing at the ground before the Test started, and leaving the match to be played under old playing conditions where front foot no balls are only reviewed by the third umpire after wicket-taking deliveries.

Probably Warner was also thankful that he was wasn’t facing Stuart Broad, who was surprisingly left out for Jack Leach for the opening Test. Broad dismissed Warner seven times within the space of 104 balls in the 2019 Ashes series.

Warner had a second life on 48 when he was put down by Rory Burns at second slip off Robinson just after lunch.

It is proving a horrible match for Burns, who was bowled first ball of the Test by Starc on the opening day and this time he put down a waist-high sitter much to anguish of his teammates.

Warner also had to scramble to make his ground on 60 but lost his footing and dropped his bat leaving him desperately stretching out for the crease. But close-in fielder Haseeb Hameed missed throwing down the stumps with Warner at his mercy.

Warner survived but lost batting partners Marnus Labuschagne and Steve Smith along the way to the tea interval.

But when Warner looked to have luck on his side it deserted him soon after tea when he was caught by Stokes off Ollie Robinson for 94, just short of his 25th Test ton. Warner miscued a drive and ballooned a catch to Stokes diving in the covers.

Next ball youngster Cameron Green miscalculated badly and did not offer a shot to be bowled for a duck, but Alex Carey, in his debut Test, saw off Robinson’s hat-trick ball as England finally got some momentum after looking consigned to chasing the leather for the rest of the hot afternoon.

Carey made 12 after hitting Chris Woakes straight to Ollie Pope at mid-wicket and skipper Pat Cummins fell for 12 to a catch around the corner off part-time spinner Joe Root.

Earlier, Labuschagne appeared to have an Ashes century beckoning on 74 off 117 balls until he cut the hapless Leach straight to backward point where Wood took the catch.

Up to that point, Warner and Labuschagne had gone after left-arm spinner Leach clouting 50 off his first seven overs with four sixes, before the bespectacled tweaker got a wicket. Leach finished the day with 1-95 off 11 overs.

England had another victory when the big-hearted Wood got the big scalp of Smith for just 12, snapped up behind by Jos Buttler nearing tea.

Smith, who gave England nightmares on the 2019 Ashes series with 774 runs at 110.57, had earlier survived a DRS on a lbw appeal by Wood, which was ruled outside the line despite hitting his back pad.

That was Smith's lowest Ashes score since making 6 at Adelaide in 2016-17. In between that innings and this series, he had plundered England's bowling for 1,461 runs at 121. So, yeah, they will take his dismissal for 12.

Root also had to manage his bowlers after Stokes looked in discomfort with an injured left knee, which was obvious on his shortened bowling follow-through. He cut a frustrated figure in the field pondering his injury situation after a limited preparation for the series.

Robinson also had to leave the field for treatment for possible cramp in his right leg forcing Root to bowl incapacitated Stokes through to the second new ball.

England’s bowlers got scant reward in the extended morning session, apart from Robinson’s wicket of Marcus Harris for three in the sixth over and in the half-hour before lunch the runs started to flow, especially with the introduction of left-arm orthodox spinner Jack Leach.

Warner lobbed him for two sixes as Leach conceded 17 runs in his second over and Labuschagne clouted him over the long-on ropes in his next over as the pair raised a century stand just before lunch with the pendulum firmly swinging Australia’s way.

Labuschagne reached his 11th half-century in his 19th Test with a square cut to the ropes off Woakes.
Robinson looked impressive in his opening spell and removed Harris, who lunged forward and got a thick edge to Dawid Malan at third slip.Robinson finished the day with 3-48 off 18 overs.

???? Here’s to you Ollie Robinson, England loves you more than you will know! ????#Ashes pic.twitter.com/exQKuSMT1V

It continued an unproductive opening partnership again for Australia with more pressure on Harris to justify his spot after being preferred to Usman Khawaja for the opening Test.

Mark Wood got up a full head of steam and touched 152 km/h in his first over with his blistering pace troubling Warner and Labuschagne.

But nearing lunch, the tide appeared to be turning with the Aussie pair stepping up the scoring rate, particularly at Leach’s expense, while Stokes’s body language showed he was not fully right, feeling his left knee after he pulled up in the field when chasing a ball towards the boundary.

Head made the most of a tiring attack and it was an impressive performance under pressure.

“It’s got to be up there for him personally,” said teammate Warner. “It was in a tight battle there with him and Ussie. They went with him and to come out and play the way he did that’s the Travis Head that we know. He wasn’t going to fiddle around with anything and was fluent in his strokes. He backed himself annd backed his areas.”