Travis Head played down the emotion he displayed when he celebrated his emphatic century on Thursday, but I don’t think what we saw out there left any doubt what it meant to him. And it means plenty for Australian cricket as well.

He was so engaging and so enthusiastic throughout that innings, and he might be playing cool, but it is significant because the No.5 is a problem spot for us and one we’re trying to fill.

To do it, and not get out in the 20s and 30s again was a fine effort. If Mitchell Starc can dig in with him, Head can go big on Friday.

He battled a bit for his first 15 balls but it changed when Pat Cummins came in. At that stage momentum was going England’s way.

Then, to sum up their day, Ben Stokes was limping around and Ollie Robinson, who had bowled absolutely beautifully and could have had five-fa, started to feel for his hammy and Head just took the Test match away from England.

It was a brilliant hundred and belied the pressure he might have felt. Unlike Marcus Harris, he wasn’t guaranteed his spot early and right until the last few days he was in a battle with Usman Khawaja to play in the Test. 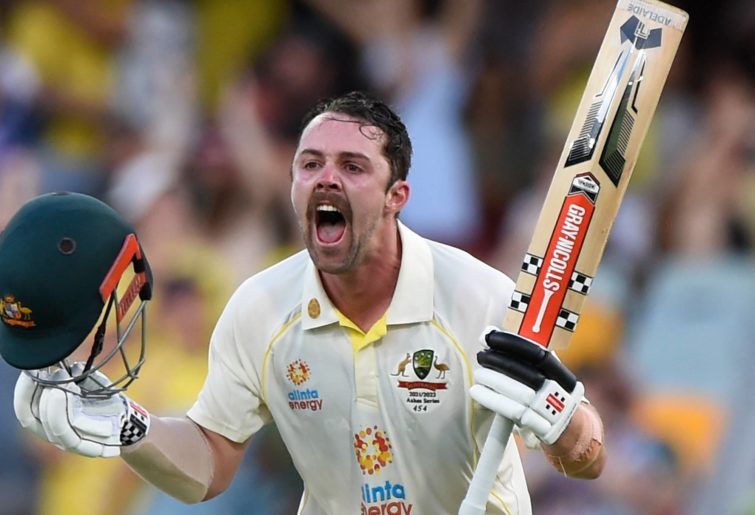 He’s been dropped a few times but he’s gone down and dominated in Shield cricket. But he would still have had asked himself that question: ‘can I do it consistently at Test level?’ What an answer – it was an exciting innings, the ninth fastest Test hundred by an Australian gives it context.

Although England were teetering when Head launched, I wouldn’t devalue that hundred.

You’ve still got to get it and he did it in some style. Now the Aussies have the opportunity to have a No.5 who really advances the game, and I just love the way he went about it.

If he is going to play that fluid style he’s going to nick off every now and again, but he rarely fails. Even today you look up and he’s 23 off 22, having not played particularly well.

He was scratching around the crease and you’re thinking ‘how did he get there?’

It’s having that ability to turn those 40s and 50s into hundreds which is so significant for our Test lineup.

We’re hoping that Marnus Labuschagne and Steve Smith score big at times through the series, and if number six Cameron Green is their project player who will take time to turn into that hard hitting, fast bowling allrounder, to have a five that scores quickly, is hard to contain and proactive is a real bonus.

Especially one who can counter attack when we’re in trouble, and advances the scoreboard when we need it to tick over.

There’s a time in everyone’s career when they get dropped – it happened to Sir Don Bradman after his second Test – but he showed today he has what it takes to establish himself. He’s in his mid 20s with long career ahead and brings leadership.

Marnus also batted really well. He’s proving extremely important at No.3, taking pressure off Smith by controlling the tough times early. His unearthing in the last couple of years has been massive for Australia.

There was some really good team batting. And there was a chance that Australia were going to get bowled out, but they’ve got the opportunity now to bat long tomorrow

England were without luck, and contributed to their own issues – including Ben Stokes’ no ball that went through Dave Warner’s defences.

It was a beautiful ball and you’re thinking you’ve gotten rid of Warner, the danger man. Then Burns dropping the easy catch, Stokes pulling up injured, Robinson – their best bowler – pulling up a bit sore. It was a classic calamity situation for the Poms.

England were loose in the field but I rate how they went about their bowling.

I thought particularly Robinson and Wood did a fine job and even Stokes for those first couple of overs bowled beautifully.

But the no ball wicket was significant at a time when it was still there to be seized for England.

Dropped catches hurt and the fielding was just so so. Nothing seemed to go right for England until Robinson got himself on a hat trick and pulled them back into the game.

But Australia were positive and took it on. All day they didn’t let Jack Leach settle – it was like a team plan to hit him out of the attack and force the quick bowlers to bowl in hot conditions and fatigue them.

I thought Robinson was super impressive. He reminds me of Vernon Philander – mid to high 120kph, bouncy, accurate, moves the ball both ways. He looked like a veteran in only his sixth Test.

He’ll love the day-night Tests and if it’s met in Melbourne and Sydney sthey might have a trump card.

Wood’s extra pace at times looked quite scary. It looked like he could really ruffle top orders feathers and then knock over the tail but unfortunately today he probably he was overbowled because they had no other options.

Woakes was just steady. I feel like they’ve missed a beat by picking him over Stuart Broad.

They’ve strengthened their batting with Woakes but when he had the new ball the first over was underwhelming. It would have been different if Broad had taken the new ball to our left handers.

He was all over them in 2019 the crowds would have been up because he’s a bit of an antihero but respected here in Australia. I thought Broad with Robinson then Wood coming in with all our lefties would have been a better balanced attack.

The toss is looking better and better to have lost. Australia bowled in cooler, overcast conditions, so they barely raised a sweat.

And then from ball one today it was hot, humid conditions.

From what you saw you might think Australia’s quicks looked better conditioned. It was more likely they had the better the conditions and the poor English had the baking, humid weather which really tested them.

England need to push it as deep as they can from here. They need as many in form players hitting the second Test because they should bowl well in those conditions with a fresh Anderson and Broad to come in.

If they capitulate with the bat that’s a real concern. They might have the bowlers to bowl well in day night coditions but have they got the batting to mount a score? And that’s the questions we’ll have answered in the second innings.