The Roar
9th December, 2021
73
Join the conversation
1978 Reads
Advertisement
Write for The Roar

Travis Head has put to bed any debate about the No.5 slot by bashing a scintillating century for Australia in the First Ashes Test in Brisbane.

Head survived an early nervous period to launch into the England bowlers and racked up his ton in just 85 deliveries to put the home side firmly in the box seat late on day two.

It was his third Test century and silenced critics who thought Usman Khawaja should have been selected in the middle order.

The South Australian left-hander was emotional after reaching his century, saluting the crowd after driving a four straight down the ground to reach his milestone.

The umpiring is under fire on day two of the Ashes Test in Brisbane after allowing four no-balls in a row, leading to Ben Stokes bowling David Warner off the fourth one and the Australian opener earning a reprieve.

In the wake of the controversial incident, it has been revealed that the technology used by third umpires to call no-balls was not available for the Gabba Test and the officials have reverted to the traditional method of the on-field umpire being responsible for calling them.

Match officials are hoping to have the technology available again “as soon as possible” but until then, the third umpire will only intervene at the fall of a wicket.

To rub salt into the English wounds, it was the sixth time Warner has been dismissed on a no-ball and he has a history of going on to make big scores when given a second chance at the crease.

He was on 17 at the time and Australia were in a precarious state at 1-30 in reply to England’s 147. They compounded the error soon after the lunch break when slips fielder Rory Burns dropped a sitter off Warner when he was one run shy of his half-century.

Warner has had amazing luck with no-balls. At Adelaide in 2014, he was out for 66 against India but earned a recall and made 102. Two years later he was on 81 when it happened in Melbourne against Pakistan on 81 and he cashed in to get to 144.

The MCG was his lucky venue again in the 2017 Ashes when he was out to Tom Curran on 99 but it was later ruled a no-ball and he again took advantage to get to triple figures, making it to 103.

In 2019 the same slice of fortune came his way twice against Pakistan – when on 55 on the way to 154 in Brisbane and when on 226 during his commanding 335 not out in Adelaide.

Today’s example of good luck was even more painful for Stokes after it was revealed it was the fourth successive no-ball he’d delivered but none of the previous deliveries had been called by the standing umpire, Rod Tucker, or third umpire Paul Wilson.

Warner edged a cutting ball onto his stumps only for the wicket to be ruled out on DRS after Stokes had over stepped the bowling crease in the first over of his spell.

England captain Joe Root, interviewed at the drinks break said: “Of course we’re frustrated, but the fact we’ve created some chances, a good number of chances in that session is pleasing.

Ben Stokes' first four deliveries of the over was No Ball, but umpire didn't see. Only 4th one was given No Ball in which David Warner was out. pic.twitter.com/DYHNJ6QrRo

“I think we’ve got to stay confident and keep trusting whatwe’re doing. Yesterday didn’t go to plan with a below par score but that’s why we have to keep creating chances and doing what we’re doing and believe we’ll get our rewards later.”

Warner was battling to express himself on a tough wicket, going long stretches of dot balls, but he accelerated as the session went on and headed to the lunch break on 48 with Marnus Labuschagne on 53 as Australia took control at 1-113.

After surviving a run-out attempt on 60, Warner’s luck finally ran out on 94 when he spooned a catch off Ollie Robinson to Stokes at mid-off. 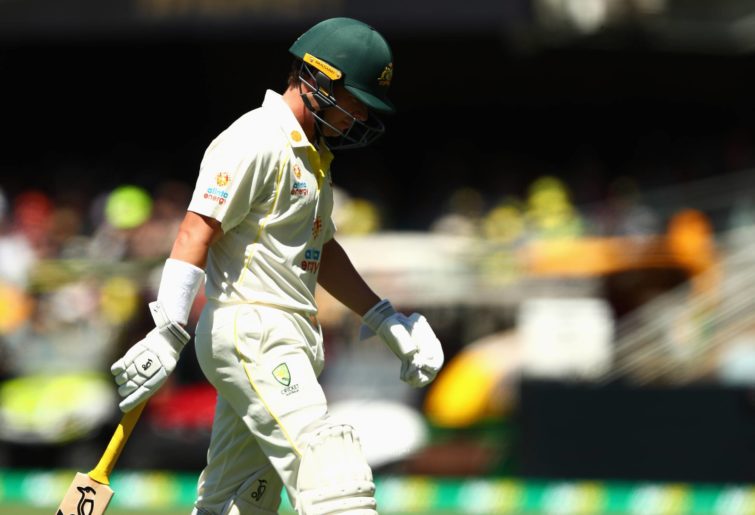 Marcus Harris again failed to capitalise on another chance to cement his spot as an Australian opener, falling cheaply on day two of the Ashes Test at the Gabba, with Ricky Ponting highlighting the technical flaws behind his dismissal.

Harris beat out Queensland captain Usman Khawaja in the race to partner David Warner for the clash in Brisbane and after England were bowled out for 147 on a gloomy, rain-interrupted day one, the Victorian had a golden opportunity to make hay while the sun was shining.

However, he prodded at a ball outside off stump from Ollie Robinson, which carried to third slip and he was on his way for three runs off 17 deliveries.

Ponting was scathing in his assessment of Harris’ footwork while commentating for Channel Seven.

“Look at his footwork. He didn’t get to the pitch of the ball enough,” the former Australian skipper said.

“And watch where his back foot goes after impact. See how it follows through? Where he ends up there is where he should have been at the point of contact. He’s unbalanced and his front-foot movement into the ball wasn’t anywhere near long enough.”

“It was a nothing sort of shot from Marcus Harris, it was quite wide. It wasn’t a drive, it was just a push. If you’re not going to leave it you’ve got to give it everything,” Warne said in Fox Cricket commentary.

“You can’t push, you can’t fend. Throw the whole sink at it or let it go.”

Harris has been in and out of the team since making his debut in 2018 against India but is now averaging a paltry 22.68 from 11 Tests with only two half-centuries and no tons.

After a poor three Tests during the 2019 Ashes, his record against England now stands at 61 runs from seven innings at 8.71 without getting out of the teens in any knock.

He’s been a prolific scorer at first-class level for the Vics and Leicestershire in English county cricket but time is running out for him to prove he belongs at Test level.

With young opener Will Pucovski’s future clouded after a series of concussions, Harris had the chance to establish his spot and will likely be given the next Test in Adelaide at the least to strike form but with Khawaja waiting in the wings after a red-hot start to the season at Shield level, he may not get many more opportunities before the selectors run out of patience.

England spinner Jack Leach wrote his name into Ashes folklore when he was Ben Stokes’ unlikely batting ally in the 2019 Headingley miracle but he entered unwanted territory in the record books on day two of the First Test at the Gabba.

Leach’s left-arm spin struck in the second session when Marnus Labuschagne cut a wide ball to point but he was dominated by the Australian batters for the rest of the day.

His figures of 1-95 after 11 overs meant he was going for 8.63 runs per over as David Warner and Travis Head in particular took a liking to his barely turning deliveries.

With figures of 1-95 after 11 overs, Jack Leach has the second-highest economy rate of any spinner in the history of Test cricket at the Gabba (8.63).

The only bowler with a worse economy is England's Jack Ikin who bowled 16 balls in 1946 and had a rate of 9.00.#Ashes

In the history of Test matches at the venue, the only bowler with a slightly worse economy rate was countryman Jack Ikin, whose two eight-ball overs in 1946 went for 18 runs.

Leach’s leaking of runs was the last thing captain Joe Root needed as his team battled in the field on day two – his two best bowlers, Ollie Robinson and Ben Stokes, both appeared to tire dramatically late in the day as the heavy workload, combined with limited pre-game preparation, took effect.

Root had to bowl himself for a six-over stint before England took the second new ball and scored a rare minor victory for the Test thus far when he dismissed opposing skipper Pat Cummins for 12.