Joe Root and Dawid Malan have restored England’s battered morale after two horror days with a game-changing unbroken 159-run stand, to give the tourists renewed hope of salvaging the opening Ashes Test at the Gabba.

Faced with a crushing 278-run first innings deficit after Travis Head propelled Australia to 425 with his adventurous knock of 152, England went to stumps on Day 3 at 2/220, trailing by just 58, after Root and Malan stopped the rot of the opening two days’ play.

Skipper Root led from the front, making amends for his first-innings duck to be closing in on his first Test century in Australia by the end of the day’s play. He heads into Day 4 on 86, with Malan providing stout support on 80.

Australia snared the wickets of openers Rory Burns and Haseeb Hameed before tea, but the extended final session belonged solely to Root and Malan, who defied the home attack on an easier-paced Gabba pitch to turbo-charge England back into the contest.

Root, who faced a pair after his nine-ball duck in the inglorious England first innings of 147 on the opening day, rekindled his prolific scoring form of this calendar year to take the challenge to the Australians. His highest Test score in Australia, 87 in Adelaide on the fateful 2013-14 tour, is now within reach.

The knock swells Root’s 2021 aggregate to a whopping 1,541 runs. Along the way, he overtook former captain Michael Vaughan’s previous best 1,481 Test runs in 2002 as the highest-scoring England batter in a calendar year.

Malan was also nearing his second Test century, and his second in the Ashes, after scoring 140 in Perth in 2017.

If we didn’t know it already, Joe Root is the best batter against spin in Test cricket. Big runs against the Sri Lankan spinners in Galle, outstanding against R Ashwin in Chennai & now milking Nathan Lyon at the Gabba #Ashes

BBC statistician Andy Zaltzman revealed that England have only had one partnership higher than the Root-Malan stand in their last two Ashes tours combined.

“It was the 237 that Dawid Malan and Jonny Bairstow put on in the first innings in Perth four years ago. England went on to lose that game,” he said.

Finally, a couple of good sessions for England. Joe Root has 86, one shy of his highest score in Australia, and has put on 159 with Dawid Malan. They remain 58 behind, but have made Australia work, which they didn't manage over the first two days.

England lost both openers in the middle session as they set out to take a big chunk off Australia’s imposing lead. Sitting on a king-pair after his Day 1 golden duck, opener Rory Burns opted to start at the non-striker’s end for the second innings; just the fourth time in his first-class career he’d done so.

Rory Burns has opened the batting 264 times in First Class cricket. Today is the 4th time he hasn't faced the first ball. pic.twitter.com/GTZsqh7PMd

It would still take the DRS to save him from another first-over dismissal to Mitchell Starc; adjudged LBW by umpire Paul Reiffel, the review system would find the ball bouncing over the stumps, giving Burns his first lucky break of what has been a dire Test.

>> WATCH: This is how close Starc went to picking up Rory Burns for a pair

In the over after lunch, a Pat Cummins lifter forced Burns on 13 to glove it for Alex Carey to take the catch. Hameed looked set on 27 off 58 balls before he played well away from his body leg-side and flicked Starc off his glove through to Carey.

Cummins immediately brought himself and Josh Hazlewood into the attack upon the arrival of Root at the crease, just as he’d done in the first innings. Between them they have dismissed the England captain 15 times and had the stats on their side; but today the script was flipped. 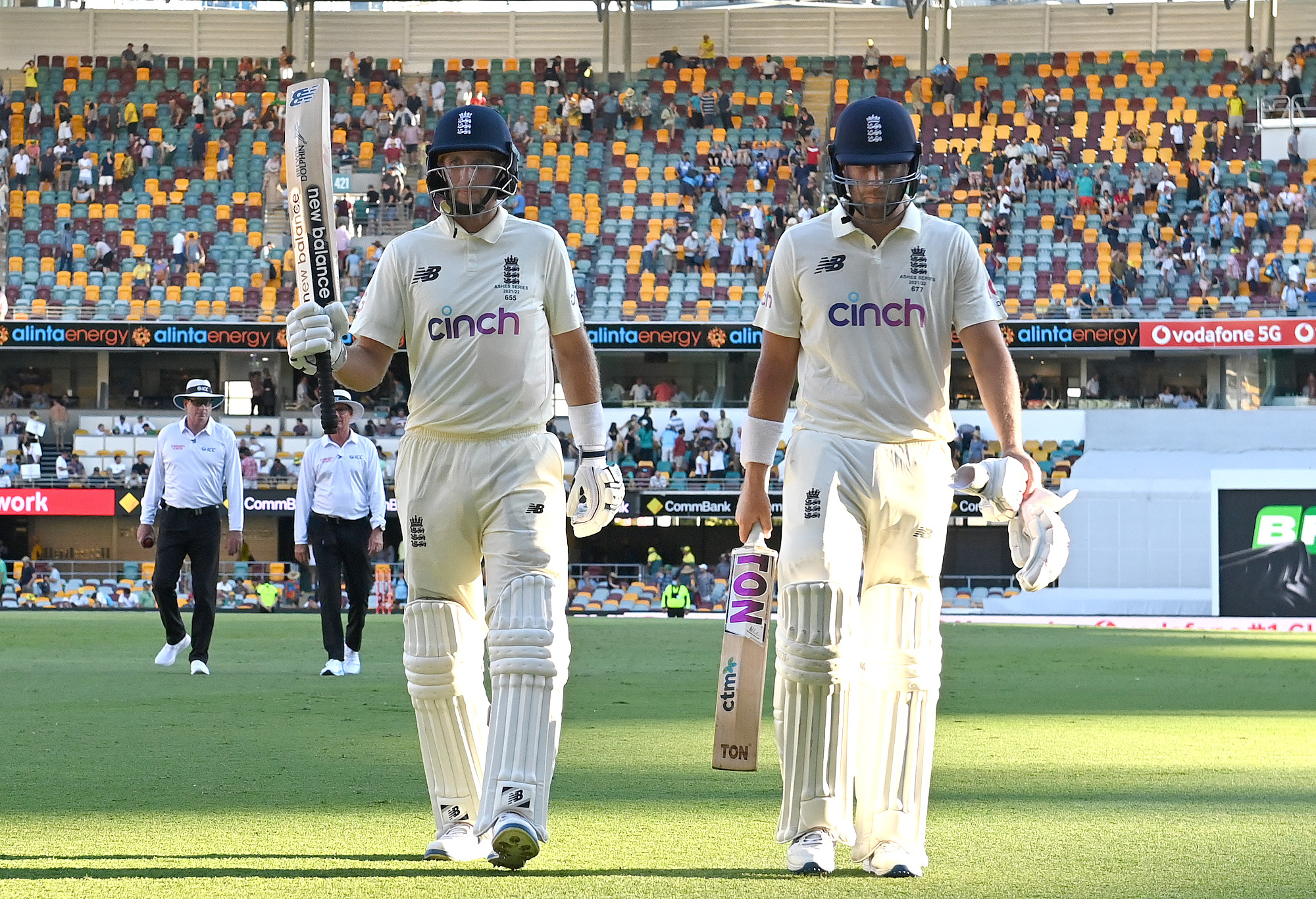 Joe Root and Dawid Malan leave the field after Day 3 of the first Ashes Test. (Photo by Bradley Kanaris/Getty Images)

Hazlewood had got Root edging to slip in the first innings, and much rested on the champion England batsman to build a substantial innings to avoid a heavy defeat the second time around.

Root went into this Ashes series far and away the highest run-getter in Test cricket this calendar year with six centuries.

Root and Malan steadied the innings and went to tea at 2/107, still trailing by 171 runs but offering some hope after two disastrous days for the tourists.

On 16, Malan survived a DRS for caught behind off Hazlewood after Hot Spot found no nick on the bottom of his bat, and with no Real-Time Snicko in use for this Test, the review was turned down by the video umpire.

David Warner stayed in the team rooms during England’s second innings after taking a blow to his ribs while batting on the second day. His place was taken on the field by Jye Richardson.

The Australian tail wagged in their first innings with Travis Head, adding 82 runs in the extended morning session before Head was bowled by Mark Wood as he moved away from his stumps to wind up a shot.

Head’s 152 came off 148 balls with 14 fours and four sixes, and set up an imposing 278-run lead. His dismissal gave the beleaguered tourists more than 30 minutes to negotiate to lunch in their monumental task to save the Gabba Test.

Head was supported along the way by Starc’s attacking 35, with the pair putting on 85 runs for the eighth wicket; while Nathan Lyon chipped in at the end with 15. Wood finished with 3/85 to be probably the pick of the England bowlers.

Head raised his 150 with a slog sweep off the hapless spinner Jack Leach, who went for 1-95 off his 11 overs on Thursday’s second day.

Leach finished the innings with 1/102 from 13 overs, amid concerns the assault from the Australians has made him unselectable for the second Test in Adelaide.