FLEM'S VERDICT: Balls to the wall as everything rides on Hazlewood fitness and Root's resilience to new pill

Twenty-four hours earlier Australia would have been thinking ‘we can’t lose it from here’. Now it’s a possibility, and a huge moment is looming in the course of this Test match.

In 10 overs time Pat Cummins, who looked cool despite the toughest of his three days as Australian captain, will be handed a shiny new ball.

Will Josh Hazlewood, who went missing from the attack after bowling just eight overs, amidst some mystery, be there to take it?

If Hazlewood can’t take that new ball that’s a massive win for England. We saw how he used it in the first innings and even on flat pitches he gets steep bounce.

We’re still ahead of the game. Take a couple of wickets quickly and you wouldn’t expect to chase too many. If they can lead by 150 I wouldn’t be backing England to win but it would give them something to bowl to. If they can get to 200 though it’s a different game.

So with two set batsmen and Root’s fabulous record in 2021, there’s an urgency with this new ball. The way Australia use it must be premium. 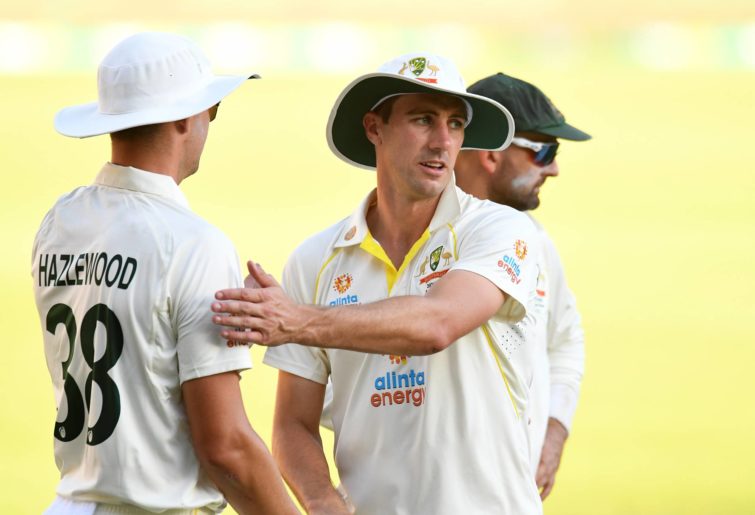 At the Gabba, days two and half to three and half, are generally the best batting.

Because England’s innings was only half a day in cool conditions, the best batting might be through tomorrow up until tea. When it’s like that it’s a new ball wicket.

If you don’t get wickets with the new ball it’s really tough but if you can a breakthrough you can go on a run and get a few wickets in succession.

That’s a massive hour for this match. Can they strike before that and get a new batsman in? The ball will jag around, but 15-20 overs later it may be really good for batting again.

We’re not sure what happened with Hazlewood, and Marnus Labuschagne denied he had an injury at the press conference after play, but it hurt – he’s a big weapon and brings that good length better than anyone else in the team.

Cummins bowled Lyon quite early after a break when the ball was new and I question that. I would have preferred to see Cameron Green with a newer ball because he’s got a natural outswinger.

That’s not to take away from the batting of Root and Dawid Malan – they played very well.

We were all waiting to see if Root, in career best form, could bring it to Australia. He hasn’t scored a 100 in Australia but was very good last tour without that, averaging in the 40s.

The worrying sign for Australia is what he’s been doing once he goes past his century. He’s scored seven hundreds since November 2019 – five of those have been greater than 180. The new Root, the ruthless Root as captain, goes big and you don’t lose too many Tests if someone scores double hundreds.

If he gets a double and there’s handy batting from the guys below we could be looking at a 200 plus chase.

Malan’s support was critical. We know Root and Stokes can play match winning innings but there were real questions around the other four in the top six.

Malan was excellent last time here, averaging 40 in a well beaten team, scored 100 in Perth but has not scored a run since at Test level.

It’s funny how techniques will work in some conditions but not in others. He doesn’t move his feet a lot, is good square of the wicket and a good back foot player. It suits him here whereas in England that sort of technique can leave you vulnerable to bowleds and lbw and nicks behind.

So far he looks a good selection. And what it does is it pushes Ben Stokes and Ollie Pope and Jos Buttler down – stroke players who are going to come in a very strong position.

Even in the first innings, he played one bad shot and got out. He’s pretty cool and calm and the fast stuff doesn’t worry him. And he doesn’t go hard at the ball. His weakness can be he can waft outside off stump every now and again, for example his first innings dismissal.

He has a short backlift, not excessive footwork, but watches the ball and also has a good game square of the wicket is pretty common in our best players here in Australia.

He looked to get down the wicket to Nathan Lyon, and that’s not an easy thing to do.

Lyon wants the batsmen scratching around the crease. He ran down a couple of times, got inside the line and bunted it on the legside but then he played an unbelievable cover drive.

Lyon bowled the perfect ball he wanted, got outside his eyeline, dropped it outside offstump and Malan ran down and played one of the best cover drives you’ll ever see.

And then in that last over he played another cracking cover drive. Sometimes those lead footed players play short pitched bowling alright but he’s equal to the task against spin – that’s rare.