Gregson went into the Tokyo Games after years of injury pain in her left foot. She fought through it to reach the steeplechase final but on the final water jump her world came crashing down when her ‘loyal’ right foot gave way.

Her right Achilles snapped as she came down and she laid on the track as the race went on around her.

Gregson was distraught as she was wheeled off the arena, and says the next few days were dark.

Four months on, Gregson is building her way back from the trauma with her sights on ending her career on her terms – as a marathoner at the Paris Olympics in 2024.

It’s a big ask. Although Gregson has a proven record on the road, she’s never run a marathon before, but she believes it’s the track work in spikes with minimal support that has caused most of her injuries.

“I’m undefeated on the roads in Australia over the last two years and I seem to have really good response to roads,” Gregson wrote on athletesvoice.com.au, The Roar’s sister publication.

“I don’t think my career is over yet. I think it’s just ready to change and start a new chapter. And maybe this was what I needed, a really abrupt finishing of my track career.

“It could be a sliding door moment where I now move on to the roads and start again, but hopefully have some success.”

Gregson admitted she needed the target of the Paris Olympics to help with her recovery.

“It’s really the only thing that I’m working so hard for,” she wrote. “My progression’s been phenomenal. My doctors and physio and strength and conditioning coach are just over the moon with how I’m progressing.”

Gregson set a timeline of running one competitive road race next year but has upgraded her ambition to tackling the road season. It will be too early to make a marathon debut, and she understands it’s cutting things fine for Paris.

“Some people have an amazing debut and it might take them one or two more to hit their best,” Gregson wrote. 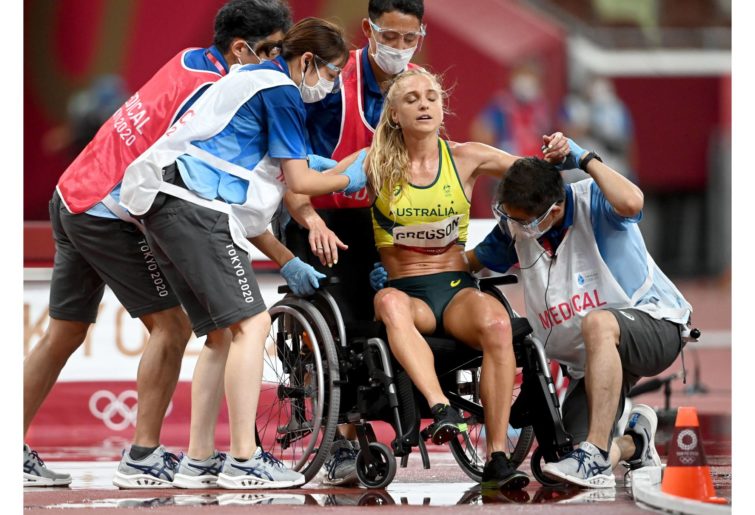 “Others like Jess Trengove have a breakthrough on their, 12th or 13th marathon. It just depends. What is on my side is I’m an efficient runner on the road, I shuffle and don’t have that bouncy gliding stride where the pounding through your legs is taken in every step.

Gregson lives for competition and that’s one of the reasons she pushed on to the Olympics even when her body was screaming out in resistance and ready to break.

“It’s such an unnatural thing to happen to the human body. It’s the snapping of a band and the band is already so tight so it’s like a gunshot,” Gregson wrote.

“People had told me it was like being shot in the heel and that’s the best way to describe it. It is just like someone holding a gun to the back of your Achilles because it doesn’t hurt or sting or anything.

“It’s just really powerful and it just snaps so aggressively. As soon as I hit the ground the first thing I did was feel for it. I knew it wasn’t there but I just felt it to check because I was pretty confident something in my leg had snapped very hard. “

Her mind was racing.

“It’s everything. The amount of things that I thought about in that split second seemed to last a lifetime,” she wrote. “It was all these thoughts scrambled. Then you think this is the Olympic final and I may never get this opportunity ever again and it’s gone just in a split second.”

The track attendants took their time getting to her aid and she was in tars when eventually wheeled into the medical rooms. She borrowed a phone to text her runner husband Ryan, who was covering the race for SEN Radio and had already worked out the extent of her injury.

“I remember distinctly when they were wheeling me off the track and it really sunk in what I’d done,” said Gregson. “There are plenty of pictures of me with my hands over my face because I was bawling my eyes out.

“There was no pain. You want to know what it feels like to rupture your Achilles? Honestly it feels like nothing. The thing I was crying about was this is massive. This is a long road back. Do you want to keep doing this? Was that your last race?”

When she looks at the photos from that moment “the biggest thing I can see, other than shock is disappointment.

“It’s what you would see in most athletes’ faces. It’s just pure disappointment and sadness to a point where you think of everything you’ve done to that point and it ends with a ruptured Achilles.”

Two days later she was asked to go back to the track to talk to Australian broadcaster 7. She felt ready, although now accepts she wasn’t.

“I probably thought I was ready for that interview because I obviously don’t want to cry on national television,” writes Gregson.

“But the shock of that question ‘what’s next?’ I think that’s where I really struggled. Because even though I’ve thought about it so many times I found it hard to describe where I go from here.

“When I stood in front of the camera and was asked one or two questions, I just realised I wasn’t ready to speak. One, I hadn’t spoken to anyone, and two, it was too soon and too raw.”

Gregson thought the interview was going out live, so she texted her bemused family to apologise. She’s glad they were forewarned.

Gregson is now back in Queensland with her family, rebuilding her body. Her mind is already right back where it needs to be to tackle athletics’ most brutal event.

“I’m hungry and driven and I love running,” she says. “That helps me a lot because it gives me longevity.

“Then when you talk about competitiveness, I don’t like that my Olympic final or potentially my career, was taken away without me choosing it to stop.

“I always thought that one day, I would just decide to hang up the shoes and know that I wasn’t competitive anymore.

“But the thought of something freak happening and that being the reason for me stopping doesn’t sit well with me. I’d rather end on my terms.

“I’m well aware it might not work. I’m well aware that there could be a lot of complications along the way. I don’t run the same, I get too old. I’m aware of those options but I’d rather die trying it then kind of just say my time’s up because I ruptured my Achilles in 2021.”