Another day of Ashes misery for beleaguered England just two days into the series and the UK media has given up on the first Test, consigned to a heavy defeat at the Gabba.

John Etheridge, writing in The Sun, does not see any way out for Joe Root’s tourists after being outplayed over the first two days in Brisbane.

“England endured another day of misery and self-inflicted problems in the First Test and it is difficult to see anything other than a heavy defeat,” Etheridge wrote.

“For a time, Joe Root’s men dragged themselves back into contention by taking four wickets for 29 runs either side of tea.

“But a rampaging century by Travis Head – who reached three figures from just 85 balls – swept the match out of England’s grasp once more.

“Whether it was dropped catches, missed run outs, Ben Stokes’ injury, Ollie Robinson’s cramp or having a wicket cancelled because of a no-ball, the problems piled up for England.” 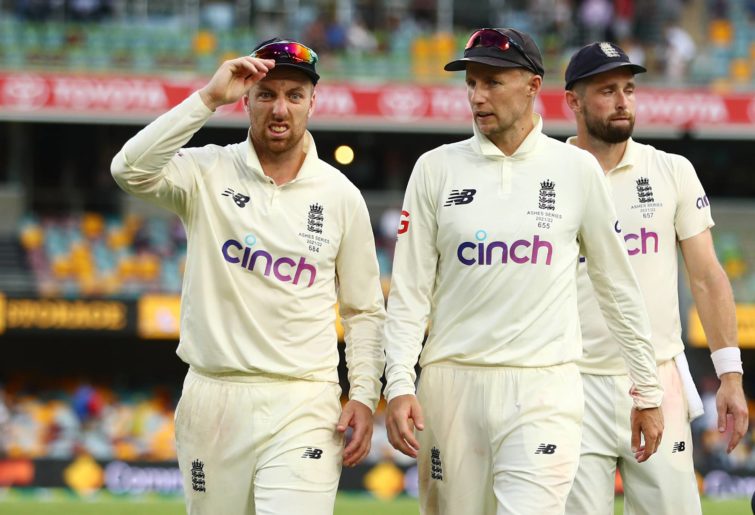 Jack Leach and Joe Root had bad days at the office. (Photo by Chris Hyde/Getty Images)

The Evening Standard correspondent Will Macpherson wrote: “The brutal realities of touring Australia hit an English side at a different moment on each tour. This time, it only took five sessions.

“Many of England’s problems are self-inflicted. They have got a lot wrong. Selection. The call at the toss. Some insipid batting when being bowled out for 147.”

The Telegraph’s Nick Hoult said the Australians were on course for victory, propelled by Heads’ counter-punching century.

“Travis Head nursed a bruised jaw from a Mark Wood beamer but it was England’s legs that were wobbling after his stunning century put Australia on course for victory in the first Test,” he said.

“Head slammed the joint third-fastest hundred in Ashes history off 85 balls – quicker than Ian Botham managed at Headingley in 1981 – as he rubbed England’s noses in the Gabba dirt by scoring a century in a session after tea.

“England trooped off broken by Head and shelled out by the effort of trying to stay in the hunt after two days of gruelling Ashes cricket that have snuffed out all the pre-series hope that it might be different this time around.”

Writing in The Telegraph, Berry said: “They had to pack their side with four seamers, plus Ben Stokes, and no spinner except Root. A specialist spinner was a luxury, which England could not afford in their extraordinary circumstances.

“If James Anderson was even less match-fit than everyone else, and had to be saved for the second Test in Adelaide, Stuart Broad had to play at the Gabba. Having played three Tests on the ground, Broad had the local knowledge, while seven of this England team are playing their first Test in Australia.”
Paul Newman, in the Daily Mail, agreed: “It was brutal. It was pre-meditated. And it was a calculated attack that looks likely to knock Jack Leach out of this Ashes and quite possibly beyond.

“The figures tell the sorry tale of England’s spinner in this horror show of a first Test. The man who was meant to bring control while England’s seamers found their legs in the Brisbane heat was smashed for 95 off 11 overs on a second day that confirmed beyond all doubt Joe Root and Chris Silverwood picked the wrong team at the Gabba.”

The BBC’s Stephan Shemilt conceded that England were facing the prospect of going 1-0 down in the five-Test series.

“England know they will have to better their first-innings effort just to make Australia bat again.” he wrote.

“Missed chances and the ineffectiveness of Jack Leach aside, England could do little more on a second day that exposed the inadequacy of their performance and decisions on day one.

“When a team is bowled out for 147, it seems churlish to rake over bowling selections, but the way Leach was singled out raises further questions over the exclusion of Stuart Broad and James Anderson, and leaves doubts over the part he could play in the remainder of the series.

“Robinson was superb, Wood bowled with extreme pace and Chris Woakes often beat the bat. However, the sight of Stokes limping is a huge concern and his nine overs cost 50 runs.”

“If England’s first-day horror show at the Gabba wasn’t enough to satisfy their most ghoulish critics, they found fresh ways of messing things up on the second,” Booth waxed.

“At stumps, Australia had recovered from a spot of relative discomfort at 195 for five to reach 343 for seven, thanks to a remarkable 85-ball hundred from Travis Head. They should win easily from here.

“But just as worrying for England was the state of their bowling attack only two days into the series’ potential 25.

“It became clear that Ben Stokes’s body had not responded to his return as he would have liked. As early as the first session he was flexing his right shoulder, and soon pulled up after chasing his own misfield to the boundary.”

Former England captain Mike Atherton wrote in The Times that England were “on their knees.”

“The drama came late in the day, the turning points much earlier. Travis Head, a struggler in the Championship for Sussex last summer and in the 2019 Ashes, put England’s weary bowlers to the sword and became the first man to score a Test hundred at the Gabba in a single session,” Atherton opined.

“Hopes raised during the hour either side of tea, when five wickets fell, were snuffed out brutally, and England finished the day on their knees.”

There was praise for stout-hearted paceman Ollie Robinson, who was England’s best performed bowler with three wickets.

“On a gruelling day, Robinson brought the few precious breakthroughs, picking off both Warner and Marcus Harris before inviting the 6ft 6in Green to leave a ball that rattled his off-stump,” The Telegraph’s Oliver Brown said.

“Some rookies can be cowed by the stresses of a first tour of Australia, but Robinson adapted superbly.”