'What have I done?': Jade Melbourne's surprise call from Sandy Brondello

When Jade Melbourne of the University of Canberra Capitals WNBL team saw a text arrive from Australian Opals coach Sandy Brondello, her first thought was ‘what have I done?’.

After you receive a message from Brondello saying, ‘Let me know when you have five minutes to chat’, you don’t leave her waiting too long.

Despite her nerves, Melbourne called Brondello back straight away and was given the good news that she had been selected in the 24-person squad for the FIBA Women’s Basketball World Cup.

“I was absolutely stoked,” said Melbourne.

“But I had to pluck up the courage to call her back – my first instinct was to pretend that my phone didn’t work anymore.”

Selection in the squad caps off what has been a remarkable two year period for Melbourne.

At just 18 years of age, Melbourne has just started her second season in the WNBL for the UC Capitals.

In her first season she made spectators stand up and take notice, averaging 8 points per game and memorably sinking a winning 3-pointer against the Perth Lynx.

To join the Caps, Melbourne made the decision to reject an opportunity to attend Arizona State on a full basketball scholarship.

Part of the reason for that is the quality of player at the Caps and what Melbourne has been able to learn from them in terms of basketball skills, but also leadership skills.

“It’s just my second year in the league and I have the chance to play alongside women that have been competing for over a decade,” said Melbourne.

“I am so excited to just keep learning, because I have already learnt so much.” 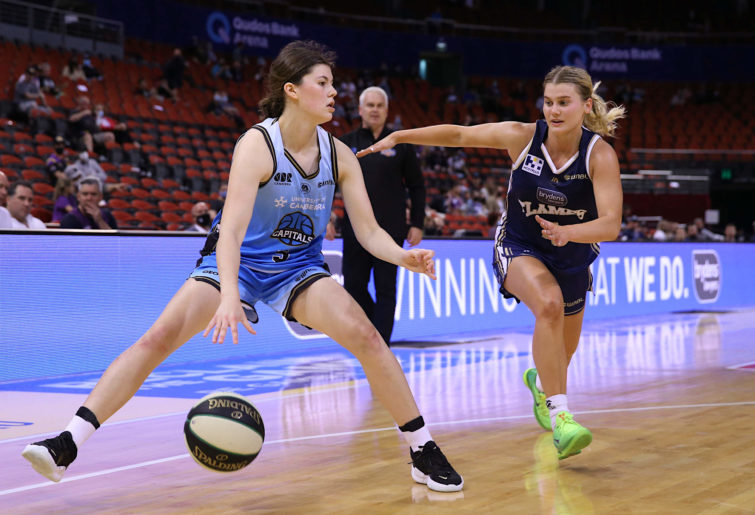 In particular, Melbourne credits the leadership of Marianna Tolo and Kelsey Griffen who were co-captains of the UC Capitals in last year’s WNBL hub season.

“The whole time we were in the hub, Marianna and Kelsey were constantly saying the right things to help me make that transition from junior basketball to senior basketball.

“They instilled confidence in me to play my own game and supported me every step of the way.

“I can’t thank the senior players enough and we are so lucky to have so many of them at the Caps.”

Melbourne is excited about the prospect of representing Australia at a home FIBA Women’s Basketball Cup, but is also taking each opportunity as it presents itself.

“Every single opportunity I have had I have learnt something new or taken something away from it,” explanined Melbourne.

“I have definitely played in teams where I am not playing as much, but I know that the experience will help me in the long run to keep improving my basketball.

“I’m still young and haven’t learnt half the things I will have learnt by the end of my career so I’m staying in the moment, staying present with everything I do and trying to take it all in my stride.”

For Melbourne, this FIBA Women’s Basketball World Cup presents a really exciting opportunity for women’s basketball in Australia and also to capitalise on recent momentum, including a landmark broadcast deal announced in 2020 and the interest in the Australian Opals during the 2020 Tokyo Olympic Games.

“It’s a really great time for women’s basketball in Australia and you can see that in the strength of the WNBL right now.

“It is such a level competition and no one knows who is going to win the Championship so it’s something everyone should get on board with.

“I am lucky to be in a position that I am young because the older women have paved such a great path for all of coming through.

“I want to continue that legacy and do my bit for the sport.”

Melbourne also hopes that the increased visibility of our female basketballers encourages the next generation of women and girls to play the sport she loves so much.

Her interest in basketball was ignited when her grandmother gave her a basketball hoop for Christmas one year. From there, Melbourne would spend hours shooting hoops.

Her mother then got in touch with a friend who was involved in basketball and the rest is history.

“From that moment I fell in love with the game and looking for things to level up.

“I haven’t looked back; I just love this sport so much.”