He could be the game’s first $1.5 million man, but Kalyn Ponga is as down to earth as they get.

When it comes to Ponga, speculation around his future is rife.

Will he active a clause in his contract to forgo the remaining two-years he has in Newcastle to chase a big money deal with the Dolphins? Or will he stay at the Knights?

While his contract status dominates conversation, the superstar fullback spent his day off giving back.

During a time where the NRL has been overrun by headlines of money grabs, anti vaxxers and white powder scandals, Ponga spent his one day off during this pre-season block, making a memory of a lifetime for young fan, Kaiden. 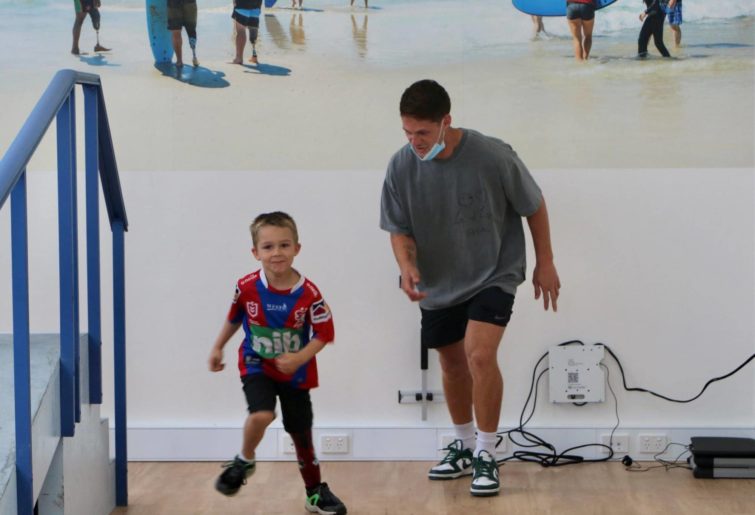 The youngster was at the APC Hunter Clinic in Charlestown, to be fitted with his prosthetic leg.

The fibre glass leg features a photo of Ponga, along with a Spider-Man and Knights logo.

After beating Ponga in a running race, the amputee was given a signed match worn jersey from his idol.
To top off the meeting, the little fella has been invited to meet the team in the sheds after the first home game of the 2022 season.

It needs to be said that Ponga wouldn’t want this story written but it’s important it’s told.

Your writer knows Ponga well and can confirm this kind of good deed is not a one off. Far from it.

Having worked with Ponga at the Knights as Media Manager for three seasons, I watched the young gun often take the initiative of visiting kids who reached out via teachers or parents. 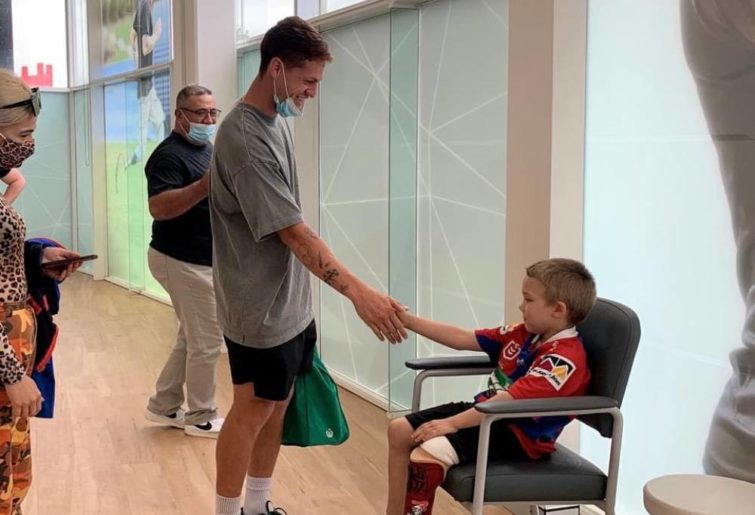 Whenever the club learned of such a gesture and approached Ponga about publicising the meeting, those suggestions were always met with resistance.

Too often these days any charitable action or initiative is accompanied by a media alert but Ponga is different. He doesn’t crave the attention. He does it because it’s the right thing to do and he enjoys giving back.

No media invitation, just staff, family and Ponga. In fact, it was a post from the family and APC that highlighted the lovely gesture.

As the NRL’s newest franchise, the Dolphins, continue to make signings, Ponga’s name will be part of the contract circus that the NRL thrives on. Reporting on player movement is important but so is this story.

Finch an open book on drug use

A raw Brett Finch has opened the lid on his battle with drugs in a powerful podcast interview.
Speaking about his lowest moment, Finch recalled a time when he called in sick to his job as a radio broadcaster in order to go an all-day bender.

His lie was uncovered and when he got home, his wife had left him.

“I get home and she (my wife) is gone and stood down from both jobs and I go to my account,” Finch told the Turn Up The Talk podcast.

“And I’ve got like minus $10. 18 months earlier, I had hundreds of thousands of dollars. And my first thought is where can I pick up. Where can I get another one from? It’s taken everything from me but I still want another one. It’s just ridiculous.”

It was an open and honest interview from Finch and can be found here.

No move for Mitchell

Earlier in the week, Latrell Mitchell teased a potential positional switch from fullback in order to allow Blake Taaffe to continue his development in the No.1.

Take it as read – that will not be happening. Mitchell will be South Sydney’s fullback in 2022.

Storm keen to see their fans

Melbourne is hosting an open training session on 21 December at John Ilhan Memorial Reserve in Broadmeadows from 9am for their members and fans. After being on the road for the best part of two years due to the COVID-19 pandemic, the club is looking to give the public an opportunity to rub shoulders with their stars and new recruits.