FLEM'S VERDICT: Performance that ended an Aussie Test career, and the strategic flaw that killed England

It didn’t take long for all our fears about heading into a fifth day with a tricky run chase to be eased, and I sense England’s approach led to their downfall.

Having got themselves back into a postition of hope they may have been too negative when they came out for day four.

Yesterday I spoke about the crucial hour around the new ball, which was to be taken after 10 overs today, but England lost 3-11 before it was even due, and it was game over.

For me, that negativity brought Nathan Lyon into the game, and once he got that 400th wicket he bowled beautifully – fuller, with flight.

Then Cam Green, who’s getting better with every spell, came through with an 77th over outswinger to dismiss Joe Root, getting the old ball to swing because he’s got such good wrist release.

The game was blown open by an unreal bowling partnership between Lyon and Green but England were perhaps too conservative.

Joe Root will be citicised for his decisions. I have some empathy for him at the toss but they got at least one selection wrong.

Pat Cummins would have batted and it wasn’t a green seamer – not that far from a typical wicket, just slower.

But the team he picked dictated that toss decision, because he included a spinner and he would have wanted him to make an impact in the second innings. Whereas if the team had Stuart Broad instead of Jack Leach, he would have had to have bowled first.

You can’t pick a full list of fast bowlers, win the toss on a green pitch and then bat. That makes no sense. So the selection made batting first the option.

What a contrast for Cummins’ first Test as a skipper. He will have to face harder tests but he’s a certainly a very relaxed character.

Travis Head seems to have benefitted from that straight away with Cummins sending him out to play his own game.

And we got a look at Cummins’ approach to DRS on an early one, where we saw Smith and Carey really debating it before Cummins came in. 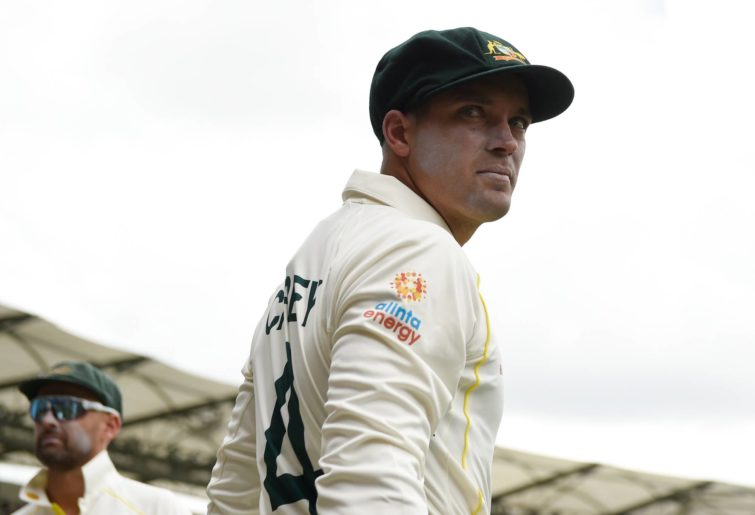 It shows it’s far from being a dictatorship under him, and there’s certain delegations by the team. That means it doesn’t stress the captain as much but it also shows it’s a captain who’s a more democratic captain, and he doesn’t have to do it all. So I thought signs were pretty good.

That dynamic will get tested but how he responds depends on personality.

Mark Taylor very rarely got flustered as captain. When Tubby had that lean stretch of 18 months Geoff Marsh, our coach at the time, would sometimes offer to do the press conferences for him.

It would have been easy to say yes but every time he fronted up for them. Patty seems to have a similarly unflappable temperament. That’s not to say he won’t get frustrated, but they don’t tend to show their emotions as much.

Most of the team had a positive impact – even Marcus Harris, by scoring those winning runs, will head into the second Test with a little bit of positivity.

Alex Carey missed out both innings but he broke a record with eight catches on debut – and he kept beautifully. A big tick there with good energy and provides leadership even in his first Test.

I think he did enough to end Tim Paine’s Test career. I think Painey was going to finish up this series anyway.

We felt that Painey was the best gloveman in Australia but there was nothing I saw from Carey that suggests he’s not an excellent Test class wicketkeeper.

His temperament’s very good and he’ll be a good ally for Cummins. I wouldn’t go back now and I don’t think the selectors will either.

Keepers are like umpires – when you don’t notice them it means they’ve had a great match. A couple of takes down the legside were top class and it just felt like there was Velcro in his gloves the way it hit them. He’s set for a long stint.

Green missed out with a first baller but it was easily his best Test with the ball.

Smithy missed out too but there were times not that long ago when if Smith missed out we were cooked. The team that they’re building now, we can win Test matches without Smithy dominating.

Marnus batted beautifully, Warner toughed it out and got runs.

Hazlewood was a concern but Cummins suggested they were managing his workload. If all are fit then the same XI play in Adelaide.

For England there are a lot more concerns and questions.

I wouldn’t change their batting because one Test is not enough to give them. But they have to get their bowling right in a hurry.

Broad should have played this Test and you can make a debate that James Anderson should have too.

Jack Leach had a quicker hundred than Travis Head. Can he play again in the series? I wouldn’t play him in Adelaide. I’d use Joe Root’s off spin and and I’d play the extra quick. So I’d bring in Broad and Anderson for Leach and Chris Woakes.

They like Woakes as a cricketer in England and he does strengthen their batting a bit. But I haven’t seen anything in his bowling in this Test match to suggest that he will do any better than he did here four years ago.

I’m assuming Stokes will be better for the run.

If they can get their attack right they can stay in the series. I think Robinson and Wood will enjoy bowling out here but they need constant bowling partnerships.