The Western Sydney Wanderers have made it clear they want a distinctive local flavour to their A-League Men squad.

A big chunk of their playing group have been handpicked due to their roots in western Sydney. The next step was to have the cream of the crop in Australian football talent, regardless of where in the country they are from.

Over the past few years, the club has signed a number of talented players including Olyroos and Socceroos representatives, but have still failed to deliver when it counts. No finals in four seasons has led to the wrath of fans.

While the results are somewhat puzzling, one thing that stands out is the club’s recruitment policy with coaches totally goes against the grain of everything the Wanderers stand for. Since Tony Popovic left, three out of the last four coaches have been foreign.

Spaniard Josep Gombau, German Markus Babbel and now Welshman Carl Robinson have all had their time in the dugout.

With the Wanderers not producing results, mainly due to lack of player cohesion, one must question this policy. It is clear the club needs a local coach who understands Australian players and our footballing landscape.

There are a number of talented Australian coaches, including some who have not yet had the opportunity to be senior coaches, who are waiting in the wings for the chance to work at arguably the most popular club in Australia.

Names like Ross Aloisi, Alen Stajcic, Mark Rudan and Kevin Muscat have all been bandied about as possible replacements for the embattled Robinson.

All apart from Aloisi have had their chance as head coach in the A-League Men and have had relative success.

Muscat won two championships with the Victory and his name was mentioned around Wanderland last season, but he appears settled at Yokohama in Japan, so seems unlikely to come back home to Australia.

Stajcic’s credentials are well known but he has taken up a role with the Philippines’ women’s national team, though it is only for the duration of the Asian Cup, in January and February 2022, at this stage.

His coaching performance last year, to take the Central Coast to their first finals series in six seasons, was widely lauded in the A-League Men.

Stajcic also took the Matildas to fourth place on the world rankings in 2017, their highest ever ranking.

He is a western Sydney boy who understands the region’s football culture.

Rudan played for Sydney United during his NSL playing days. He has played in the A-League Men as well and worked as a local football pundit for a number of years.

As a coach, he has had success in the NSW NPL system with Rockdale City and Sydney United. At United he won two NSW NPL and two national NPL titles.

In the A-League Men, he took Wellington and Western United to finals. Rudan was unceremoniously sacked last season by United, so is available if required.

Aloisi may seem an interesting choice, but he is as well credentialled as anyone else. A number of Australian football insiders, including players and coaches, consider him as one of the most underrated coaches in Australia.

He has extensive appearance as an assistant in the A-League Men – five years with Brisbane Roar and two with Adelaide United. He has also coached in the A-League Women at Adelaide for two seasons.

Before that he had three years at West Adelaide in the South Australian men’s NPL as a head coach, where he steered the former NSL powerhouse to back-to-back promotions.

Aloisi has also worked in the coaching set-ups of the Socceroos (under Ange Postecoglou) and Matildas (with Stajcic), including at World Cups. He has essentially been involved through all of the existing pathways in Australia.

He still runs his own football academy in Brisbane while working under Carl Veart at Adelaide.

Aloisi was almost hired as Western United’s inaugural coach, before a last-minute change of heart saw them go for Rudan.

A former professional footballer for 20 years, Aloisi played in the former NSL and the A-League Men, and knows Australian football inside out.

Aloisi was also rumoured to be heading to Celtic this year to work under Postecoglou again, but the move fell through.

Many feel it’s only a matter of time before he is given his chance as head gaffer here or overseas.

The Wanderers have all the ingredients needed for success. They have arguably the best facilities in Australia, an excellent youth program, and a passionate fan-base yearning for success. Yet something is missing.

A coach that understands the Australian football landscape and can get the best out of local talent is that key ingredient. 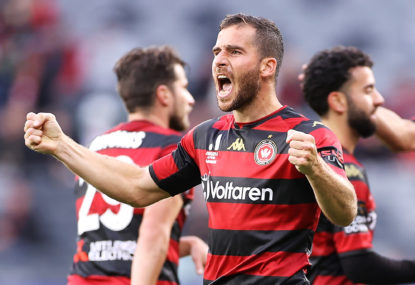