The Townsville Fire had a tremendous 2020 WNBL hub season. After defeating the Melbourne Boomers by three points in a thrilling preliminary final, they lost the grand final to the Southside Flyers.

Departures
Shyla Heal has moved from the Fire to the Sydney Uni Flames. Heal averaged 17 points, three assists and five rebounds per game and her 28 points in the preliminary final was instrumental in earning the Fire a three-point victory over the Boomers. Heal won the Fire’s 2020 Commitment to Excellence Award.

Forward Megan McKay had a decorated junior career representing Western Australia several times and was a member of the West Coast Waves development squad. Like many Australians, McKay had a college stint at St Mary’s, where she was named to the All-West Coast Conference First Team.

McKay played in the top German League with TSV 1880 Wasserburg where she averaged 16 points and eight rebounds per game before joining the Townsville Fire in 2020.

Townsville will miss her presence in the key. McKay won the Fire’s 2020 Coaches Award.

Experienced guard Kate Gaze, who also attended college at St Mary’s and played in back-to-back WNBL championships with the Fire in 2014-2015, has joined the Southside Flyers. Gaze won the 2020 Fire Players’ Player Award and the Club Person of the Year. Kelsey McDermott and Sharna Thompson will also not return.

Returning players
Three-time Fire WNBL championship winner Mia Murray returned to Townsville for the 2020 season after spending time away from the game for the birth of her son, Sidney. Murray was the 2015 grand final MVP after scoring a game-high 23 points, shooting three from five from beyond the arc.

This will be her eighth season for the Fire. Murray played her 300th game in the WNBL last season. Murray also previously played for the AIS and Adelaide Lightning. She has been named as the Fire’s co-captain for the 2021-2022 season.

In her first season for the Fire, guard Lauren Nicholson averaged 18.9 points and 2.7 assists per game. Nicholson played college Basketball for St Mary’s. She played in a championship with the Sydney Uni Flames in 2016-2017 and was key reason the Adelaide Lightning made the grand finals series in 2018-2019.

She was awarded the Sixth Woman of the Year in 2020.

Nadeen Payne has played over 200 WNBL games. In addition to the Fire and Perth Lynx, Payne has played for the AIS, Adelaide Lightning, South East Queensland Stars and Bendigo Spirit. Last season Payne averaged 8.5 points, 6.3 rebounds and 2.1 assists per game. In NBL1 North 2021, she averaged 17.43 points and 6.68 rebounds for Southern Districts Spartans.

Guard Stephanie Reid played college basketball for the Buffalo Bulls, where she was MVP of the 2016 MAC Women’s Basketball Tournament and reached the NCAA Tournament for the first time. Reid spent two WNBL seasons with the Dandenong Rangers / Southside Flyers.

She definitely took her extra opportunities in her first season with the Fire and was rewarded with a new two-year contract. Reid led the Fire in assists in two games last season, including eight against the Spirit, which was the most assists in a game for a Fire player all season.

In the 2021 NBL1 North competition, Reid averaged 20 points, 6.06 assists and 5.46 rebounds per game playing for Fire coach Shannon Seebohm at the Townsville Flames, where she won the Flames’ MVP award.

The Novocastrian also helped Australia’s under-17s to win gold at the 2016 World Cup. She was a member of the Flames’ 2016-2017 WNBL championship team. In NBL1 North 2021, McSpadden averaged 20.5 points and 13.35 rebounds per game for the Rockhampton Cyclones. She will be important to filling the void left by McKay.

Courtney Woods had her first WNBL season in 2020. The Queensland junior returned to Australia after five years with the NIU Huskies in the MAC conference. Woods is the all-time leader in three-pointers made for NIU, second all-time for points scored for NIU and is the current NIU season record holder for three-pointers made.

Aliza Fabbro, who hails from Burdekin, played just under ten minutes in a handful of games for the Fire in the 2019-2020 season and also played in the 2020 Hub season. Fabbro averaged 6.42 points per game for the Townsville Flames in the 2021 NBL North competition. She has signed as a development player.

Recruits
The Fire has signed Atlanta Dream forward Monique Billings, who was selected by the Dream at pick 15 in the 2018 WNBA Draft. She played college basketball at the University of California Los Angeles (UCLA). Billings was named in the Pac-12 all-freshman team.

Sutton was named in the First Team All-Big 12 in 2019. She played for the Washington Mystics during the 2020 WNBA Hub season. Sutton also averaged 21 points, six rebounds and seven assists per game for Sleza Worclaw in Poland.

I have classified Micaela Cocks as a recruit because she did not play in the 2020 hub season. However, she is very familiar to Townsville Fire and WNBL fans. 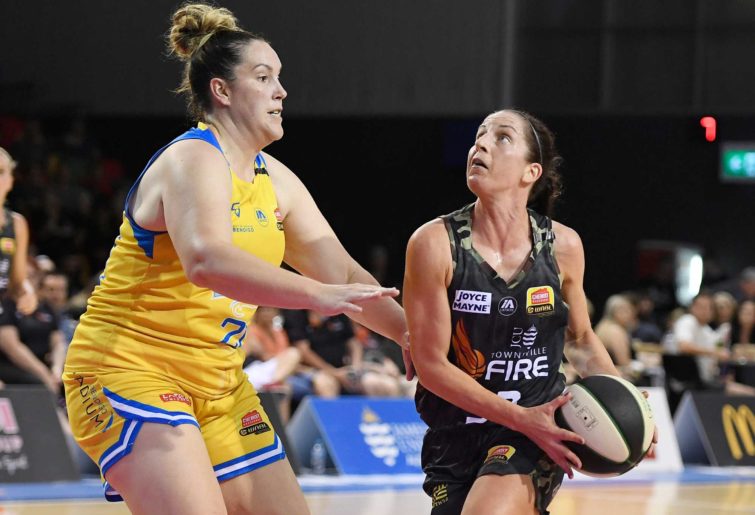 After giving birth to Hazel in November 2020, Cocks will play her tenth season for the Fire. Cocks played for the Oregon Ducks and was named in the All-Pac-10 First-Team. She has won three WNBL championships with the Fire including winning the 2015-2016 WNBL grand final MVP. Cocks also has played for the NZ Tall Ferns on numerous occasions.

Western Australian Carla Drennan has also signed as a development player. Drennan, who is originally from Willeton in WA, played for California State University Northridge in Division 1 NCAA in the Pac West. Drennan averaged 8.94 points, 2,64 rebounds and 1.88 assists per game in NBL1 North 2021 season for the Logan Thunder.

Prediction
The Fire will miss Shyla Heal, Megan McKay and Kate Gaze. The addition of imports Billings and Sutton and the return of Micaela Cocks will alleviate those departures to an extent. Although, the loss of McKay may be the most difficult of those to cover.

One advantage that the Fire won’t have in 2021-2022 will be playing 11 of their games (including finals) in Townsville and all games in north Queensland as they did in 2020. I think the Fire will just miss the finals this season.