Last season, the Boomers lost a thrilling preliminary final to the Townsville Fire, by three points. In the last few seconds, the Boomers had a couple of opportunities to hit three pointers to take the game to overtime.

In 2019/2020, the Boomers lost a semi-final series to evidential champions University of Canberra Capitals two games to one. In 2018/2019, the Boomers also lost in the semi-finals.

Departures
Former Boomers co-captain Maddie Garrick returns to the Spirit after six seasons with the Boomers. Garrick is a member of the Australian 3×3 team and played for the Opals in the 2017 FIBA Women’s Asia Cup. Garrick, who hails from Shepparton, also previously played in the WNBL with the AIS and was a member of two WNBL championships in her previous stint with Bendigo. 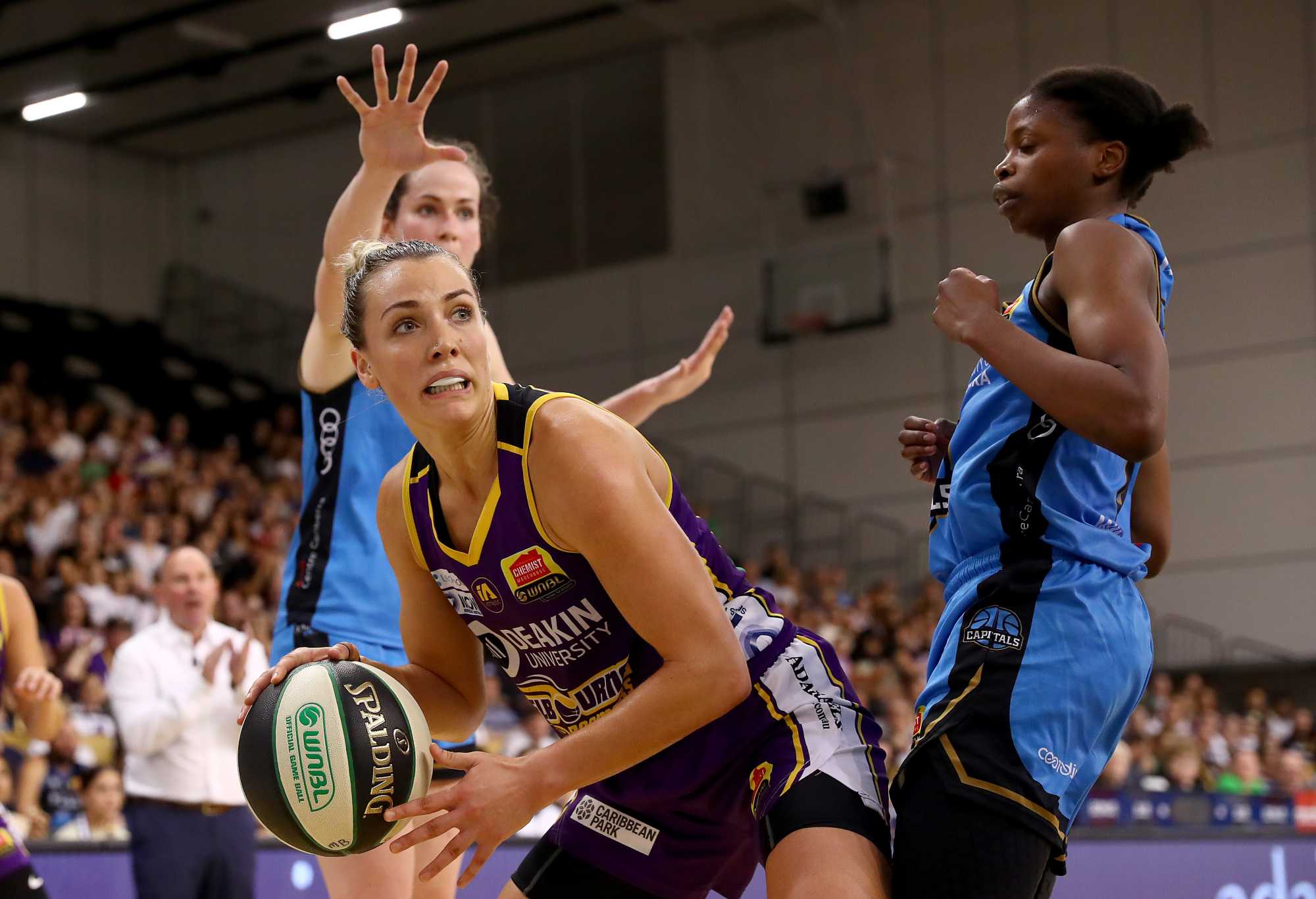 Maddie Garrick of the Boomers dribbles the ball during game two of the WNBL Semi Final series between the Melbourne Boomers and UC Capitals at the State Basketball Centre on February 23, 2020 in Melbourne, Australia. (Photo by Kelly Defina/Getty Images)

Garrick has always found herself at home behind the three-point line. Playing 3×3 has helped her develop and given her the confidence to drive to the basket.

In prior seasons, there has been a significant New Zealand flavour to the Boomers. This season several Tall Ferns have exited stage left.

Kalani Purcell is a coach’s dream: a player who does all the one-percenters. Purcell can come on and change the momentum of a game by taking a few rebounds or disrupting the passing lane for her opponents.

Purcell also has plenty of international experience with the NZ Tall Ferns. At the recent FIBA Women’s Asia Cup, she averaged 8.0 points, 6.0 rebounds, 2.0 assists and 1.8 steals per game. Purcell has joined the Sydney Uni Flames.

WNBL Life Member Toni Farnworth has announced her retirement from the competition. Farnworth played 283 WNBL games and more than 100 games for the Tall Ferns.

Her experience and steady hand off the bench will be missed by the Boomers.

Another Tall Fern Ashleigh Karaitiana originally re-signed with the Boomers; but following the FIBA Women’s Asia Cup in Jordan and two weeks of quarantine, she decided to return to her family – partner Matt and 2-year-old daughter Kalea – in Queensland, and sit out of the 2021/2022 season.

Stella Beck, also a Tall Fern, provided back-court support to the likes of Tess Madgen and Maddie Garrick. Beck, who has previously played for the Townsville Fire, has decided to have a break away from basketball.

Another person with Tall Fern connections has announced that the 2021/2022 season will be their last at the Boomers. Tall Ferns and Boomers coach Guy Molloy has announced he will move to New Zealand to continue in his role as Tall Ferns coach, and will take on the role at the helm of the Wellington Saints.

Chelsea D’Angelo spent a number of years with the Melbourne Boomers, but unfortunately missed the 2020 season after tearing her Achilles tendon. D’Angelo has joined the Southside Flyers this season.

Nunawading Spectre Rachel Antoniadou also will not return for the Boomers.

Returning players
Ezi Magbegor returns for her fourth season at the Boomers. In the 2020 WNBL hub season Magbegor was named in the ALL WNBL Second Team.

Magbegor is also a previous winner of the WNBL’s Betty Watson Australian Youth Player of the Year Award.

In two seasons in the WNBA with the Seattle Storm, she has won a WNBA championship and the inaugural Commissioner’s Cup. In the 2021 season, Magbegor averaged 6.74 points and 4 rebounds per game for the Storm.

Magbegor also made her Olympic debut at the Tokyo Olympics and was one of the Opals’ shining lights, averaging 12.5 points and 4.5 rebounds per game.

Cayla George will also be returning for her fourth season with the Boomers and 16th in the WNBL. As well as this significant WNBL experience, George has also played with Phoenix Mercury and Dallas Wings and in France and Hungary.

George’s combination with Ezi Magbegor inside the paint will be crucial for the Boomers. Don’t expect all of her work to occur in the key though, as she hit a crucial three-pointer late in the 2018 World Cup semi-final v Spain to help the Opals qualify for the final.

George won three WNBL championships whilst playing with the Townsville Fire. She also played at the Tokyo Olympics, averaging 13 points, 7.3 rebounds and 3.3 assists per game.

George was named in the 2020 All WNBL First Team, and has also won the Michele Timms MVP Medal and the Boomers Members’ Player of the Year in each of the last two seasons.

Another Tokyo Olympian, Tess Madgen, returned to the Boomers last season after spending time at the Townsville Fire, Phoenix Mercury and in Poland.

In her return season, Madgen was named in the All WNBL Second Team. In the NBL1 South 2021 season, Madgen averaged 22.14 points, 9.14 rebounds and 6.57 assists per game with the Bendigo Braves.

One Tall Fern who is coming back to the Boomers is Penina Davidson. Davidson, a University of California graduate, will be playing for the Boomers for a third season.

Davidson will continue to be an important member of the front-court with Magbegor and George. Davidson averaged 13.78 points and 7.57 rebounds in NBL1 South 2021 for the Nunawading Spectres. At the 2021 FIBA Women’s Asia Cup, Davidson averaged 15.4 points and 8 rebounds per game, and must have been desperately unlucky not to make the tournament’s All Star Five.

Rachel Brewster is returning for her third season as a Boomer. After being a development player for two seasons, it is a case of third time lucky for Brewster, after signing a full contract with the Boomers. She made the Mountain West All-Freshman team at Utah State University.

Another Nunawading Spectre, in the 2021 NBL1 South season she averaged 14.78 points and 6.42 rebounds per game.

Wright was a valuable and experienced contributor off the bench in 2020. She averaged 18.42 points, 6.07 rebounds and 3.78 assists per game for the Nunawading Spectres in the NBL1 South competition.

Recruits
Melbourne’s two imports will give Boomers’ fans a ‘Fever’. After there were no imports in the 2020 WNBL hub season, supporters will be delighted to see the return of Lindsay Allen.

Allen played with the Boomers in the 2018/2019 and 2019/2020 WNBL seasons, and was awarded with the Michele Timms MVP Medal and Members MVP in the former.

In the WNBA, Allen has played for the New York Liberty, Las Vegas Aces and Indiana Fever. In 2021, she averaged 5.4 points and 3 assists for the Fever.

Mitchell has previously played in Turkey, Russia and Israel. A two-time Southeastern Conference (SEC) Player of the Year, she helped the University of South Carolina reach the 2015 NCAA Final Four. In the 2021 WNBA season, she averaged 12 points, 2.9 rebounds and 2 assists per game.

Mitchell will give the Suzy Batkovic Medal (WNBL MVP) award a real shake. 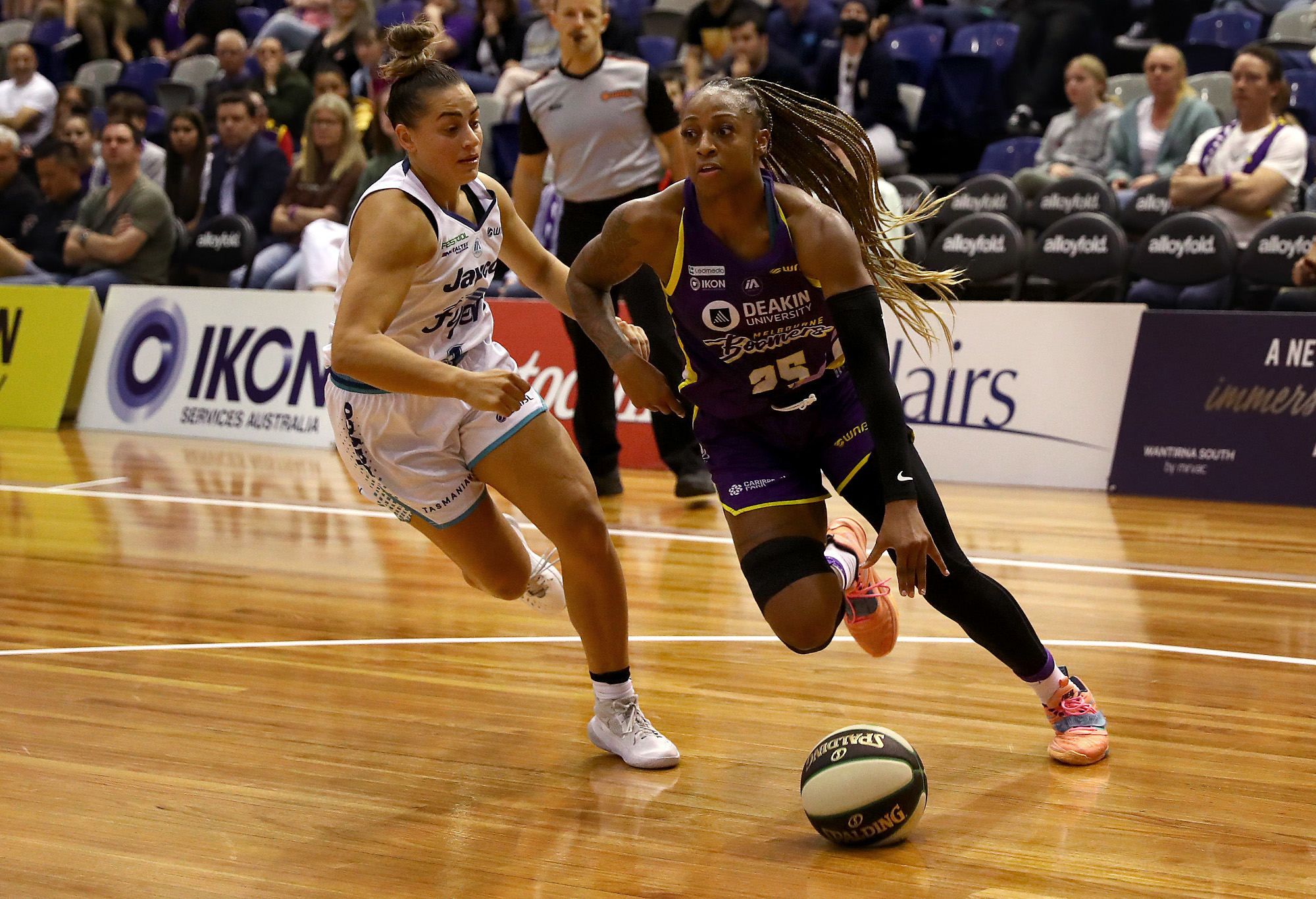 Tiffany Mitchell of the Boomers drives past Maddison Rocci of the Flyers. (Photo by Kelly Defina/Getty Images)

Brown and her teammate Rachel Brewster both attended the Rowville Sports Academy. She won a scholarship at the Australian Institute of Sport and played college basketball at Washington State and the University of Tennessee.

Brown played in the NBL1 South season with a number of Boomers teammates at the Nunawading Spectres under Boomers’ assistant Paul Flynn. She averaged 13 points and 8 rebounds per game for the Spectres.

Brown has been doing a magnificent job of hosting the Melbourne Boomers’ podcast Women with Drive, which has even hit TV screens on Channel 31.

The Boomers have ‘welcomed home’ former Bulleen Boomers junior Lily Scanlon. Scanlon received a scholarship at the Australian Institute of Sport, and won a silver medal at the 2019 FIBA Under 19 World Cup.

As a development player at the University of Canberra Capitals, Scanlon was part of the Capitals’ 2019/2020 WNBL Championship team. In 2021, she won the West Coast Conference Championship with Gonzaga University.

Tess Heal has joined the Boomers as a development player. Heal has played juniors for the Bulleen Boomers, and has captained Vic Metro at three Australian Junior National Championships.

Heal is the niece of Australian basketball legend and Sydney Uni Flames coach Shane and cousin to Sydney Uni Flames recruit Shyla. She averaged 13.41 points and 4.58 rebounds per game for the Eltham Wildcats in NBL1 South.

Sophie Burrows is another development player for the Boomers. The Eltham Wildcats junior won silver with the U18 Victorian Metro team at the 2021 Australian Junior Championships. Burrows averaged 11.83 points and 5.91 rebounds per game for the Diamond Valley Eagles in the NBL1 South competition.

Charlise Dunn and Jacqui Trotto have also signed as development players. Dunn was a scholarship holder at the Centre of Excellence in 2020. Dunn was a member of the Australian Under 19s team at the 2021 World Cup.

Trotto has previously been a development player with the Southside Flyers. She averaged 6.84 points and 4.38 rebounds per game for the Ringwood Hawks in NBL1 South.

Prediction
With three Opals and Lindsay Allen and Tiffany Mitchell in the starting five, the Boomers will be difficult to stop. Fans will be hoping that Penina Davidson can replicate her Asia Cup form. The team will also be determined to send Guy Molloy off with a high before he heads to New Zealand to coach the Wellington Saints.