Where to from here for England and Australia?

I’ve lost count of the number of times I’ve heard the expression “cricket’s a funny game”. The first Test fits that narrative nicely.

One team was bowled out in two sessions on day 1, then the same team batted wonderfully well on day 3, to be a real chance of pulling off a victory for the ages, only to lose eight wickets in two hours and eventually lose the match inside four days.

Both teams will likely only have had Saturday to celebrate or commiserate before turning their attention to the day-night clash in Adelaide, so where do both teams stand heading into the second Test?

Australia will have a couple of injury concerns, though to what extent is still an unknown. David Warner has rib issues, while there must be question marks over the fitness of Josh Hazlewood.

Separate to that is the form of Mitchell Starc. He’s probably operating at about 80-85 per cent of his best, but is that good enough to guarantee him a place in Adelaide?

In an ideal world, both bowlers will play. Starc because of his record with the pink ball, but Hazlewood should only play if fully fit. He will have a crucial part to play in the upcoming Tests, so resting him for Adelaide and giving Jhye Richardson a game would not be the worst result.

Warner will play, end of story. Rib injuries, while painful, still allow batsmen to play shots and perhaps like Gordon Greenidge, Warner might focus a bit better with an injury. 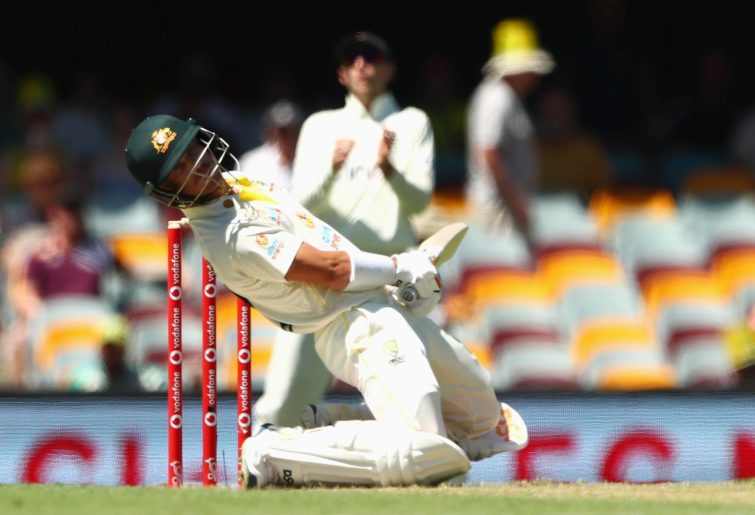 Tactically, Australia ticked the right boxes in Brisbane, hence the comprehensive win just after lunch on day 4. What they’ll be most pleased about is the monkeys coming off the backs of Cameron Green and Nathan Lyon, thanks to the wickets they both took, as well as the MOTM innings by Travis Head.

The obvious concern is whether Marcus Harris can lift, but overall, they’ve done pretty well in all departments and know how to play Test cricket under lights.

England have issues in all four departments: batting, bowling, fielding and tactics.

There was a gap as wide as the Sydney Heads when it came to the fielding of the two teams and for mine, the problem for England starts with Jos Buttler.

Another old cricket expression is how the wicketkeeper sets the tone for the fielding and that was blindingly obvious when Alex Carey was keeping. He was clean and crisp taking the ball and had the slips positioned perfectly for any chances.

Buttler on the other hand struggled in all aspects. On more than one occasion he missed simple takes from the medium-pacers and he was too far back, which probably cost England at least one chance.

The flow-on effect to the rest of the team was clear, with throws at the stumps missing by some distance, including one from Haseeb Hameed to run out Warner from only two or three metres away.

This is one area where England can and should match Australia. Buttler needs to set the tone and the fielders need to stay alert and focused.

All of the talk during and after the game is what a difference Stuart Broad and James Anderson will make to this line-up and so they should, given their Test records. That said, what about the other support bowlers?

Mark Wood is quick, seriously quick, and the rearing deliveries looked really impressive thudding into the keeper’s gloves, but he didn’t quite have his line and length right.

Ollie Robinson could not have asked for better conditions to bowl in at the Gabba, at least initially and he bowled some nearly unplayable deliveries but again, while he looked great beating the bat, his lines and lengths weren’t quite right.

The other issue for Robinson is stamina. He looked completely spent just after tea on day 2, which coincided with Head’s terrific assault on the attack. Of all the England bowlers, he has to be the one they’d be concerned about. I’m guessing the physios will be working overtime to get him right for next Thursday.

England has relied on a fourth and fifth bowler, but I wonder how well that’s going to work in Adelaide? They know they have problems with their batting (more about that later), so could be tempted to go with an attack of Broad, Anderson, Robinson and Woakes, but there’s a sameness to these bowlers.

The alternative is to bring in Mark Wood, who could be a real handful under lights, but he’s a proper No.11. The other alternative is Jack Leach but Australia played him pretty contemptuously in Brisbane and he’s more of a rabbit with the bat than Wood.

The dilemma on top of the fourth bowler is Ben Stokes, who is clearly not right. He’s had a bung knee for the past two or three seasons at least and it popped out again in this match. To his great credit, he tried to help the attack and did bowl some excellent deliveries, but 1 for 65 off 12 overs was not what his captain would have wanted from him.

Whichever way they go for Adelaide, the England bowlers need to work out their lines and lengths. It’s only small margins, so they should be able to get this sorted quickly.

England badly need to turn the rest of the Ashes Tests into low-scoring affairs because as another saying goes, you can’t get blood from stone.

The batting line-up that played in Brisbane is by far the best available for England, but for once, averages tell a story. Joe Root is world-class but the rest of the support batting, while willing, is simply not capable of making regular totals over 400 against a quality attack like Australia’s.

England fans can wish all they like but the reality is, this batting XI is far more likely to score under 300 than over. In saying that, 300 can still be a very competitive total if the England bowlers and fielders do their part and keep a still fragile Australian batting line-up in check.

If I was Joe Root, I’d lay down an expectation that every player makes their current Test batting average in the first innings in Adelaide. If they were to do that, Australia could find this very challenging, especially if they have to bat under lights against Anderson, Broad and Robinson.

Joe Root needs to get his tactics right and that starts with team selection. Adelaide should be far easier to pick an XI, assuming all are fit.

The quality in the England attack rests with their fast bowlers – that’s who he should go with. No Leach, no Bess, only Root for spin support if needed.

He also needs his team to match Australia’s intensity. That happened a few times in Brisbane; Hameed in the first session, when Pope and Buttler were batting together in the first innings, that period on day 2 when Australia lost four quick wickets and that long partnership between Dawid Malan and Root.

We keep being told this Australian side is very beatable and that’s probably true, but not if England can’t stay focused and match the pressure Australia will bring.

This is also the Test match where England needs to go all out to win and that means playing with plenty of aggression. That means winning every session and aiming to dominate.

Their batting can be far more aggressive looking for singles, Root can try more aggressive field placements, but above all, the bowlers have to take the lead and bowl Australian lines and lengths, to force the batsmen into error. And England must take every chance that comes their way.

If England can keep Australia to scores under 300, they are at worst a 50:50 chance in Adelaide, but they must put far more pressure on Australia than they did in Brisbane. If they can, this might be a low-scoring but very even Test match.