Losing former number one draft pick Cam Rayner in the preseason cast a pall over the Lions’ early season, only for the side to show their true mettle and go on a run of form after a stuttering start.

Suddenly though, the side that had ridden its luck with minimal injuries for several seasons was becoming a casualty ward and the depth was sorely tested as they fell out of the top four.

The Lions’ star recruit had his best season since 2017, giving the side a second tall target up forward to complement Eric Hipwood and allow Oscar McInerney to go into the ruck full-time, but when ‘the Eel’ went down a month before finals the advantage was gone.

Lachie Neale had problems of his own playing through various injuries and getting tagged out of contests, but this challenged the midfield to find other ways of gaining the ascendency and flying the flag to offer some cover for their Brownlow Medallist.

Brisbane entered the finals on the back of a cliffhanger against West Coast, where they needed to win by a certain percentage to knock the Bulldogs out of fourth place (and got it with some help from the timekeepers), but they were seen off by the imperious Demons and then lost yet another home final, this time against the Dogs, to bow out in straight sets against the eventual grand finalists.

Who’s gone?
The club got two final seasons out of Grant Burchall, just as they did with Luke Hodge, while their longtime project ruckman Archie Smith, whose father is ex-NBA player and former Brisbane Bullet Andre Moore, decided after 16 AFL games in eight years and being the only player to win three NEAFL premierships that it was time to move on to new pursuits, having been a late basketball convert.

Academy graduate Connor Ballenden was cut, along with Tom Joyce and Brock Smith, however as delisted free agents they are invited to sign VFL contracts if they can’t find another club to take them on, with the potential to be re-rookied in the first half of 2022.

Trade
With one developing ruck coming in and a veteran walking out, the Lions again went out looking for a ruckman, but this time they needed an experienced one in case their first choice failed and Geelong was willing to trade Darcy Fort and a third-rounder for two Lions third-rounders.

Brisbane did one more clever piece of trading, realising that they had little opportunity to move further up the board and only needing three picks, they sent a late third-rounder to GWS for Port’s future third, which was mutually beneficial.

Draft
The Lions went into the draft with a pair of first night picks and no outstanding position of need, but with one veteran defender retired and their All Australian defender turning 32 next year, they went for the youngest player in the draft, small defender Darcy Wilmot from the Northern Knights.

With the final pick of the first round, which they’d traded from Melbourne last year in a gambit gone somewhat sour, the Lions chose Kai Lohmann from the Greater Western Victoria Rebels, a small forward who impressed with one of the better performed teams in the NAB League.

Then with the second pick in the third round, 41st overall, the Lions used the second part of their Fort trade to select midfielder James Tunstill from East Perth’s Colts.

Re-rookie
As promised, the Lions re-rookied Cam Ellis-Yolmen, a player by now who must be well used to being delisted and picked up again, although at age 29 in the new year he will want to make 2020 his year.

The verdict
Brisbane collected five players in positions they were targeting, with a couple of big men and a trio of kids they will take time to develop. If none of these players features in their 2022 side, it will be absolutely no problem because, other than Darcy Fort, they are all going to be in development – and even he is just insurance for injuries to tall timber.

Darcy Wilmot is a gutsy defender who comes highly rated, with the traits the Lions were looking for in a creative ball-user who can lock down an opponent as easily as peel off and back himself to impact the play. 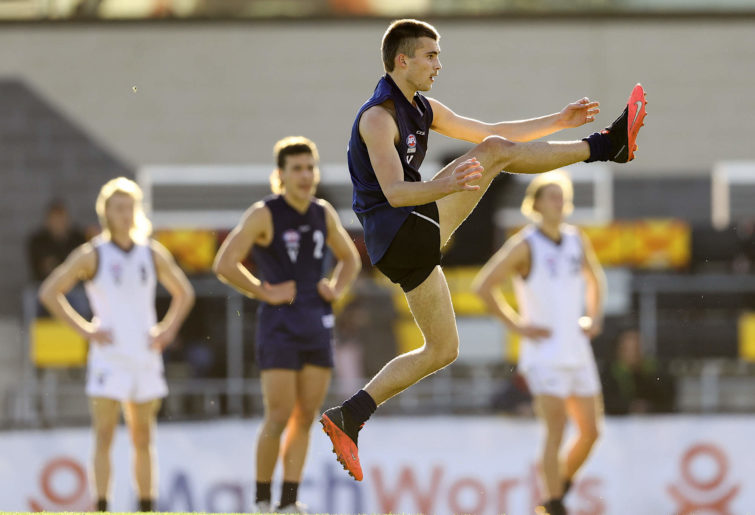 Kai Lohmann is a speedy medium forward with the athletic traits to make him an AFL talent. With a high ceiling and potentially some growth left, his defensive pressure and clean hands make him a handy project for the future.

James Tunstill is a midfielder who is as yet untried at senior level, but a solid Colts season has seen him show enough to get onto the Lions list.

Kalin Lane becomes the next in the stable of rucks who probably comes into next season at third or fourth banana, even then maybe overlooked if Tom Fullarton continues to earn selection as a ruck/forward, but he represents quality depth and insurance.

Final word
This is a club in win-now mode, only replacing five players, which was the lowest of all 18 clubs. They went into the draft with three picks and were done by pick 41.

The loss in the semi by a solitary point will have burned in their guts for three months and the new recruits will have entered pre-Christmas training seeing an intensity they’d never experienced.

This was never going to be a flashy draft unless the Demons flamed out and rocketed the Lions’ pick up the order. Still, their patient gambits might yet come off.