DAY 1 REPORT: Another ton goes begging, but Warner and Labuschagne give Aussies the edge

David Warner and Marnus Labuschagne put on a century stand to steer Australia safely through a tricky opening session and into a commanding position on day one of the second Test, but the opener will be kicking himself after falling in the 90s for the second time this series.

Warner’s 95 was compiled with uncharacteristic watchfulness after the slowest start to an innings in his swashbuckling career. He’d take 20 balls and all of nine overs to get off the mark, and 53 to reach double figures – both all-time lows for one of cricket’s most destructive ever hitters.

From there, though, the runs would flow as Warner’s patience paid off, taking just 55 further balls to reach his half-century as his stand with Labuschagne swelled to 172. However, just as at the Gabba, the left-hander would spoon a catch into the covers one hit short of a richly deserved ton.

Statisticians reveled in the catcher being 2019 Ashes nemesis Stuart Broad, while his score of 95 – one more than in Brisbane – was Warner’s exact tally across the entirety of that fateful series in England.

It fell to new (and old) captain Steve Smith to team up with Labuschagne and see the Aussies safely through the tricky night session, made more menacing still by the arrival of the second new ball, and through to stumps at 2-221 – but not before wicketkeeper Jos Buttler, having started the day with an outstanding one-handed pluck to remove Marcus Harris, produced a horror drop to spare the number three on his own 95.

Earlier, Smith began his second incarnation as captain by winning an important toss, giving the Aussies first use of an Adelaide Oval deck that historically has been at its best early in the Test.

The news made for an ideal start for the hosts after their camp was thrown into chaos following Pat Cummins’ COVID-enforced withdrawal just hours before play.

Having shared a restaurant with a positive case on match eve, Cummins’ absence from what would have been his second Test in charge had England fans rejoicing. Given the new-look bowling attack at his disposal, with debutant Michael Neser and third-Test quick Jhye Richardson the chosen replacements for Cummins and the injured Josh Hazlewood, it was a relieved Smith when opposite number Joe Root called incorrectly at the toss to allow the Aussies to bat first.

Not only did it allow the Aussies a chance to catch their breath and dictate terms, as they are wont to do in Antipodean conditions, it enabled Neser to cool his heels following one of the most abrupt call-ups to the Test team in many a year.

Warner – boasting a chest guard after copping a fierce, rib-damaging blow off Ben Stokes in the first Test – would nonetheless square up to resume his battle with Broad, whose reign of terror over the left-hander in England caused him a wholly different, even more distressing sort of agony.

Having left both out in a humbling loss at the Gabba, Root deemed the traditionally seamer-friendly day-night conditions in Adelaide sufficient to recall old stagers James Anderson and Broad, with speedster Mark Wood and spinner Jack Leach making way.

That call quickly looked the right one as the pair combined brilliantly with the new ball to make life difficult for Warner and opening partner Marcus Harris.

The most destructive duos in Test history! ???? #Ashes pic.twitter.com/cwohkmScmz

Their opening spell would feature three reviews, all of which went against the visitors – a pair of LBW shouts turned down and upheld by the DRS against Warner, and one given but overturned against Harris, the Adelaide Oval’s sprightly bounce denying Broad his first scalp of the series. 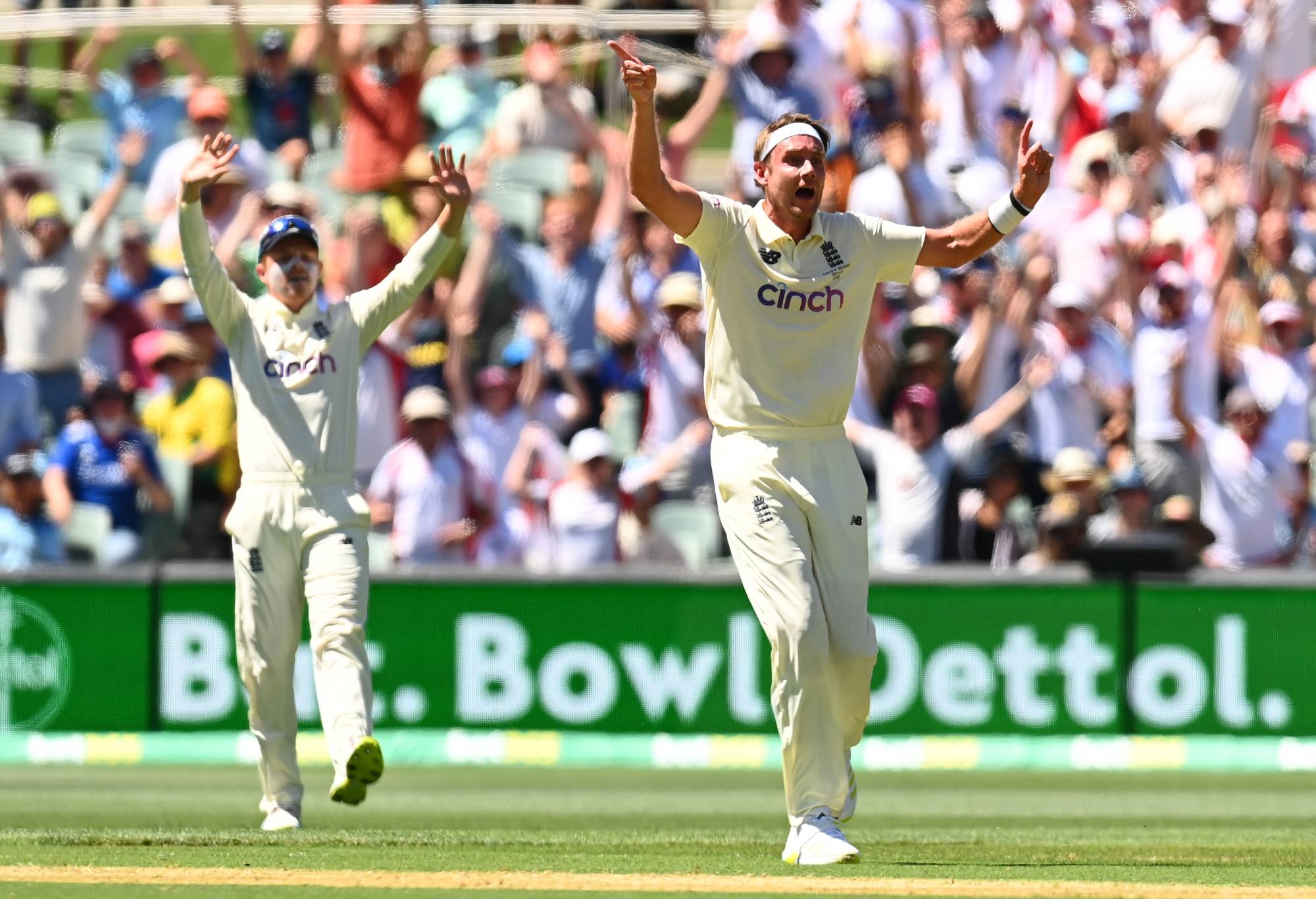 Harris’ reprieve would count for little, however, gloving behind to a spectacularly diving Jos Buttler having added zero runs to his tally of 3 and just eight more balls.

With an average of just 9.13 against England across five Tests – the lowest of any opener past that threshold – and with a Test average hovering around the 20 mark, the Victorian’s spot in the team is now precarious enough that surely only runs aplenty in the second innings can save him from a Boxing Day omission.

Bowling only 25 overs in the first session meant England were once again well behind the over-rate; having already cost themselves their entire match fee and five World Test Championship points for their first-Test tardiness, the latest transgression had many pondering whether greater punishments were required.

No specialist spinner and an abundance of reviews hardly helped matters, but with Australia on a mere 1-45 at the break, repeatedly chasing balls to the fence wasn’t an excuse as it was in Brisbane.

A diving Buttler would provide the turning point of the day, shelling Labuschagne on just 21 going to his non-dominant left side. Given their respective standings, the wicketkeeper may have preferred to claim Labuschagne and spare Harris.

Add that to his final-session Labuschagne spill – a far, far simpler take – the keeper’s day, having started so brightly, would finish in despair.

An absolute sitter hits the deck as Labuschagne gets another life #Ashes pic.twitter.com/QI3bDaIRRO

1-129 at tea with both Warner and Labuschagne past the half-century mark, the fiercest storm had been weathered, and the pair were quick to cash in on a host of fatigued Englishmen in the final session.

Sharp on the pull and disdainful of anything short, any errors in length, which grew more and more frequent as the sun set, were dealt with savagely by Warner in particular, as three figures loomed large. 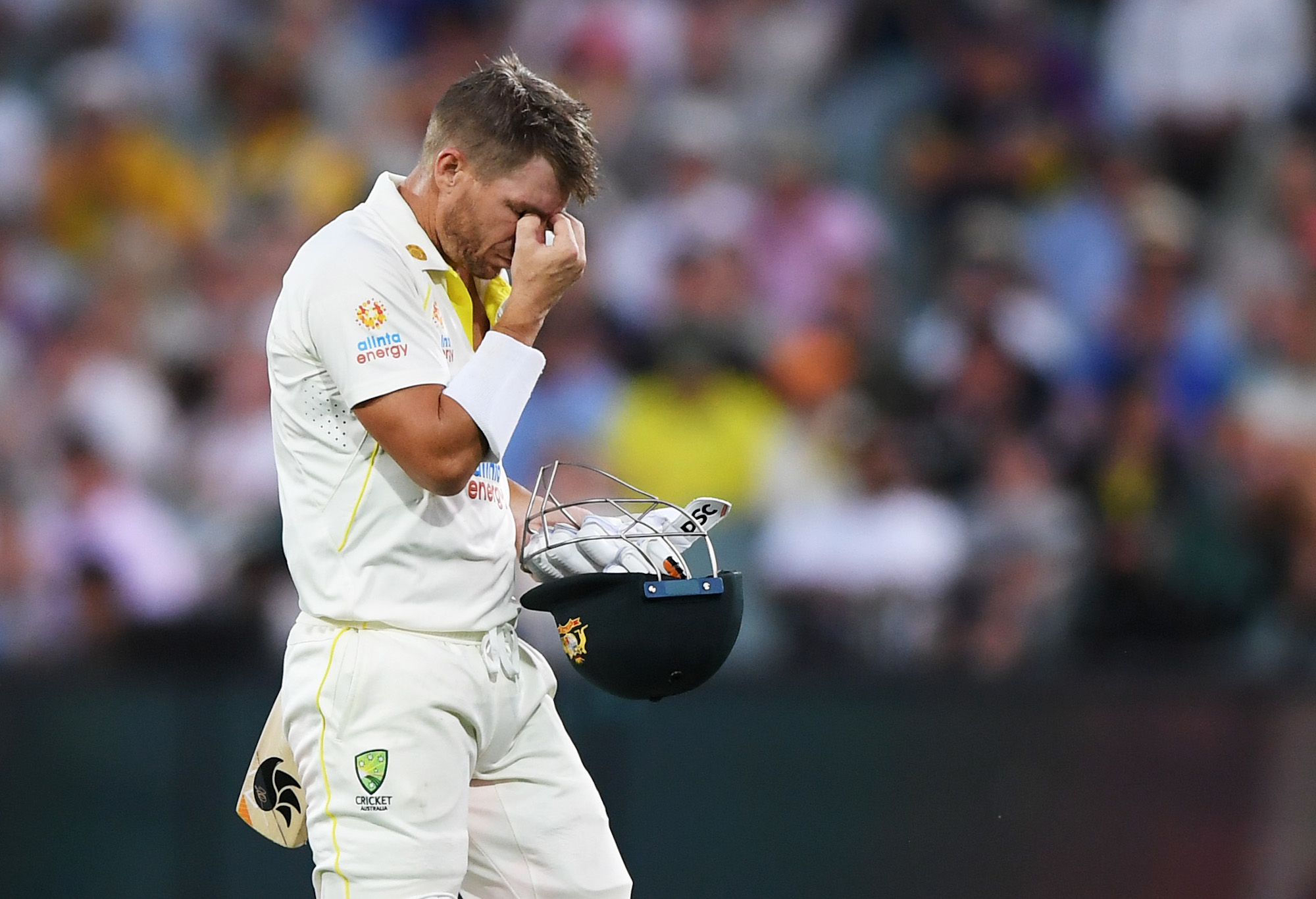 ADELAIDE, AUSTRALIA – DECEMBER 16: David Warner of Australia out for 95 during day one of the Second Test match in the Ashes series between Australia and England at Adelaide Oval on December 16, 2021 in Adelaide, Australia. (Photo by Mark Brake – CA/Cricket Australia via Getty Images)

The left-hander’s dismissal provided the low point of the day for the Aussies, denying Warner the ultimate revenge on Broad following their one-sided tussle two and a half years ago. All attention then turned to Labuschagne’s quest for a ton before stumps.

Despite the Buttler reprieve, a Steve Waugh-esque late surge to three figures proved too steep an ask for the number three. He’d shut up shop to finish unbeaten on 95 – but with the team well past the 200 mark with wickets in hand and on a pitch with few demons in it, Labuschagne is odds on to record Test century number six in the early stages of day two.

Only four players in Test history have scored 2,000 runs at a faster clip #Ashes pic.twitter.com/5Hhpz4B3FO

Another large score looks a formality for an Australian batting line-up, especially with first Test man of the match Travis Head still waiting in the wings. The greater challenge may prove to be with ball in hand; the debuting Neser and the recalled Richardson, alongside the experienced Mitchell Starc and Nathan Lyon, have a task ahead of them to prise out 20 English wickets.

Already, a draw seems the visitors’ best bet – slim pickings for a team who put all their chips into this match from the moment they arrived on these shores.

As for positives, well… they at least finished only one over behind the expected rate.