DAY 2 REPORT: Neser, Starc, lightning all strike as Aussies finish with a bang

Michael Neser’s maiden Test wicket and Mitchell Starc’s continued stranglehold over Rory Burns has left England on the ropes, as Australia continued their domination in a dramatic climax to day two in Adelaide.

Only a lightning storm, which had hovered around the city for much of the final session but finally drew too close for comfort, prevented the English top order from enduring another 45 minutes of the always tricky night session. But having already been reduced to 2-17 in reply to the Aussies’ imposing 9-473 declared, with Burns and fellow opener Haseeb Hameed the men to fall, the early finish came too late for the beleaguered tourists.

If it took until the final overs of the first day for England to reach their nadir – keeper Jos Buttler’s incredible spilled sitter to spare Marnus Labuschagne – then at least they got it over and done with by the seventh over on the second.

After Labuschagne brought up his sixth Test century, and first against England, Ollie Robinson induced another edge from the Queenslander, this time safely snared by Buttler – only for a front-foot check to reveal the quick had overstepped.

It was eerily similar to the Ben Stokes no-ball which spared David Warner at a crucial juncture on day two at the Gabba – while Labuschagne would only add one to his tally, trapped LBW after shouldering arms to Robinson and then wasting a review to boot, the die had been cast. This wasn’t going to be England’s day. 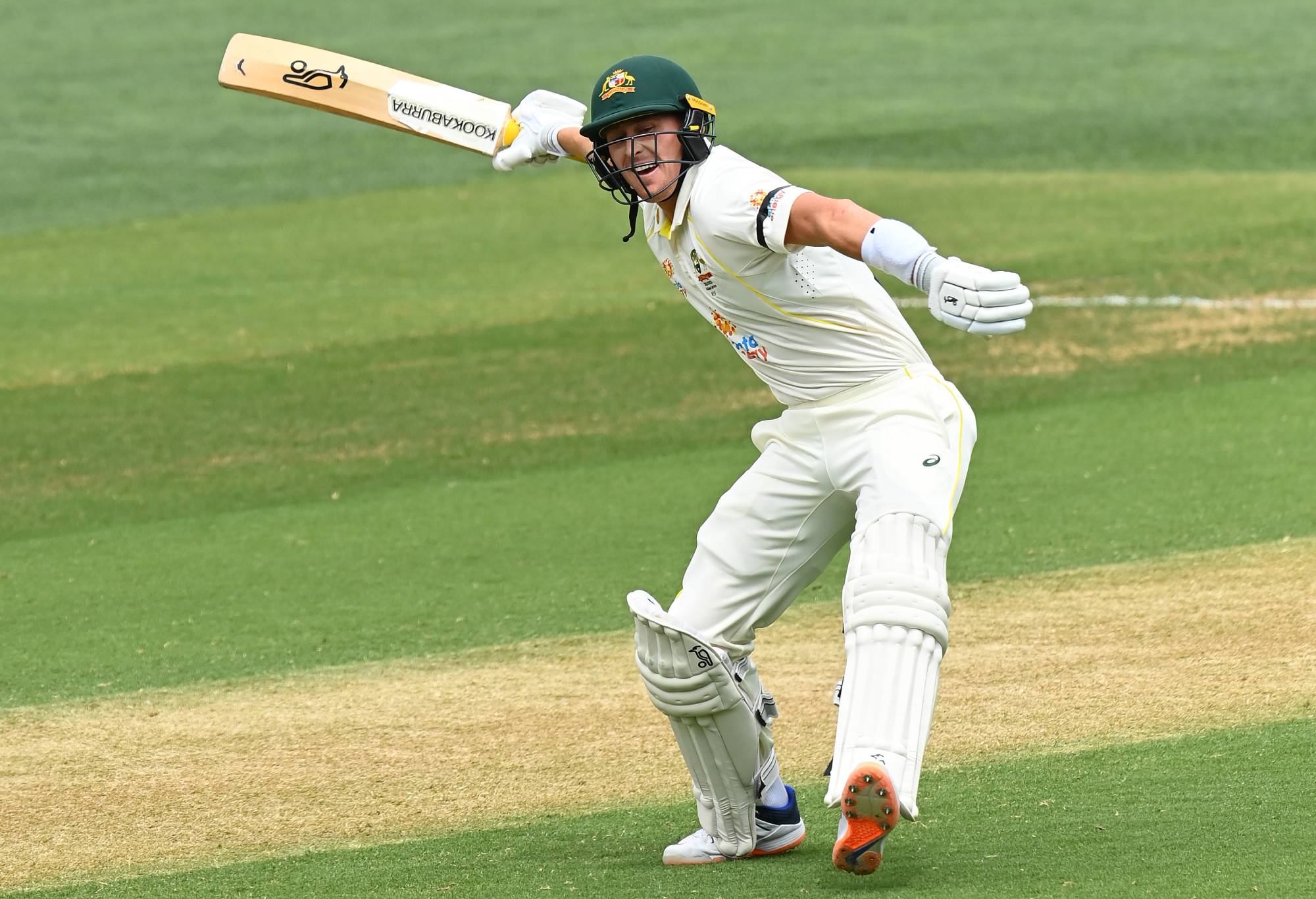 To their credit, it wasn’t without a fight: a lionhearted day’s work from the ageless Anderson at least forced the Aussie batters to work for every run. Even Steve Smith, so long the old enemy’s tormentor-in-chief, was regularly beaten outside off stump, the veteran’s wiles and cunning showing even on a pitch wholly unsuited to his gifts.

For much of the day, though, Joe Root’s plan for Smith was a short-ball peppering – and where a similar ploy by New Zealand’s Neil Wagner two years ago was successful, here the stand-in captain was largely untroubled. Employed as the enforcer, Stokes’ medium-fast bouncers did little to disturb Smith, a disdainful uppercut over point summing up the afternoon’s play.

It was when Stokes reverted to a fuller length, as so many English pundits had pleaded for during day one, that the visitors enjoyed their most fruitful period, from pace and spin alike.

Root’s threat to left-handers – he averages slightly above 30 to southpaws compared to above 60 for right-handers – is no statistical quirk, but Travis Head put away far better balls at the Gabba than the near-full toss he missed to lose his leg stump.

A fuller length? Certainly; but Stokes’ beauty to a discomfited Cameron Green – nipping back off the seam to clip the top of off stump – was more what said pundits were talking about. 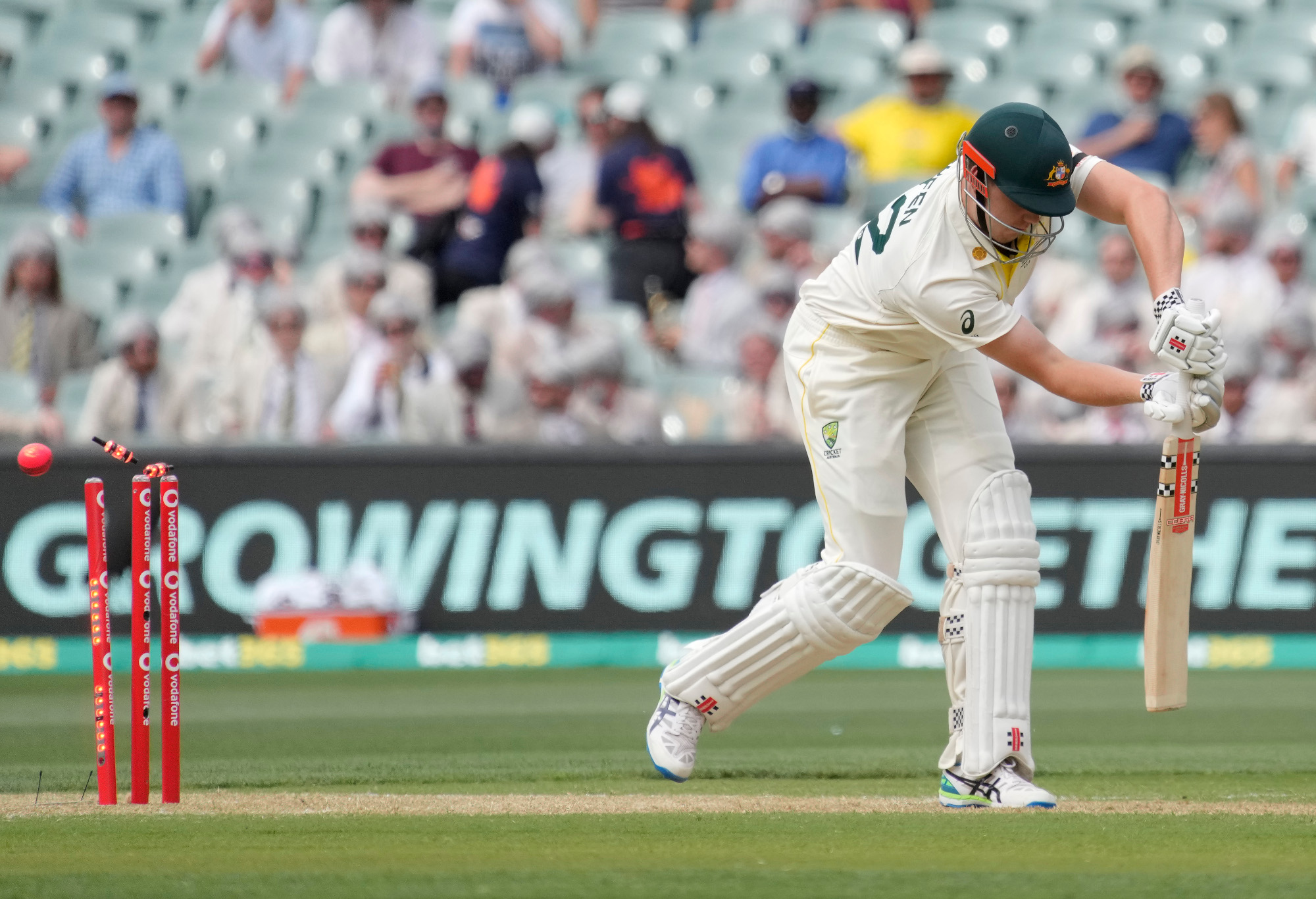 For all Green’s improvement with the ball this series, his batting, specifically to balls attacking the stumps, remains a work in progress at Test level. Based on Ricky Ponting’s expert dissecting of the all-rounder’s technique, a call for aid should be coming sometime this week.

Batting class is in session with Ricky Ponting.

His lesson on Cam Green's dismissal, what it says about his technique and mentality, and also an option on how to improve things #Ashes pic.twitter.com/ok0c2ROMNi

Having restricted Australia to 5-294, England held hopes of preventing the sort of first-innings obliteration they’ve faced at this venue in the last two tours: both times, scores in excess of 440 effectively nullified hopes of victory then and there.

To do that, though, they’d first have to conquer Smith, now with a willing ally in Alex Carey still aiming to enable a declaration before sunset, and set up a challenging period with the swinging pink ball under the Adelaide lights.

While far from freewheeling, Carey showed the attacking qualities that have made him so crucial to Australia’s ODI set-up; the pair’s stand swelled to 91 in 28 overs at a far speedier rate than day one’s sedate pace.

They hardly needed help, but a wayward throw from Burns to gift Smith five provided just that, Stuart Broad left unimpressed by the effort.

Highlighting the more aggressive approach was a murdered pull from Smith off Woakes, reacting to a drop in length to deposit the Englishman into the stands over mid-wicket. Smith’s sixes are rare enough – the chance of a miscue would be anathema to the man that could bat for five days if allowed – so as to make the sight of them all the more compelling, and symbolic.

By the time both fell on the stroke of tea – Smith missing an Anderson nip-backer seven shy of his twelfth Test ton against England, Carey spooning him into the covers after reaching his maiden half-century – the ante was there to be upped.

Neither Starc nor the debutant Neser needed any encouragement; through a mix of miscues flying over the fingers of desperate fielders, or far more wholesome strokes peppering the stands and Fox Cricket’s ‘Foxy Rover’ camera alike, the runs came in a flood compared to yesterday’s gentle meandering creek.

Even the Fox Rover is copping it now! ???????? #Ashes pic.twitter.com/AKXRbrUXIz

Neser’s fun ended after a 24-ball 35, one wild shot too many presenting a skied catch for a tumbling Broad: but Starc’s was just beginning.

Having finished at the Gabba only marginally behind the average of most of England’s top seven since the start of 2019, the left-hander was keen to surge by them. One particular smack down the ground off Stokes was a stroke any batter in the world would have been proud to call their own.

Not to be outdone, Jhye Richardson would take to Chris Woakes, nailing the second ball of his Test return into the deep mid-wicket stands to delight his teammates. By this point, even the Englishmen were waiting for the declaration; once the Western Australian nicked to Buttler with the score at 473, Smith would do the honours.

Tellingly, opener Rory Burns, having started at the non-striker’s end just three times in his first-class career before this series, would do so for the second innings in a row.

If the plan was to shield him from his nemesis Starc, it proved fruitless: the left-armer would have Burns caught by Smith in the cordon to begin his second over, for his third failure in a row.

You can be at the non-striker's end first ball, but you can't hide. Rory Burns falls cheaply to Mitchell Starc again. #Ashes

If the Aussies were cock-a-hoop then, those celebrations looked muted when Neser’s second ball in Test cricket – or third, if you count the dead ball where Hameed backed away in what would have been a controversial moment had the Kookaburra not fractionally missed the stumps – was casually chipped by the other opener to Starc at mid-on.

Having waited a cricketing lifetime for his chance, Neser was suddenly an overnight success, as goes the adage. Any hopes of a second scalp were dashed, however, when Malan was distracted mid-delivery by a particularly large burst of lightning. Thankfully, as it was with Hameed, that ball went wide of the stumps too.

Play has been suspended due to bad weather ⚡️

More lightning, closer by far than earlier strikes which did nothing but provide some brave tourists a photo opportunity, saw play abandoned early… but having already made inroads in the time available to them, neither Neser nor Australia seemed overly concerned.