DAY 3 REPORT: Nothing will save woeful England as Australia move into prime position

Well may they sing God Save the Queen because to paraphrase Gough Whitlam, nothing will save England after a disastrous third day of the Second Ashes Test.

Apart from skipper Joe Root and first drop Dawid Malan, the English batting line-up crumbled for the third time in as many attempts this series as Australia accelerated towards a crushing defeat.

A late run out, in which Australian openers Marcus Harris and David Warner got horribly mixed up to spell the latter’s doom, was the sole bright spot of the day for the visitors, who now seem destined for a third successive humbling series defeat on Antipodean shores.

Apart from the Donald Bradman-inspired 1936-37 Australian side, no team in the history of Ashes contests has won a series after trailing 2-0, and Root’s bunch of outclassed no-hopers are about as far removed from The Don as humanly possible.

Resuming at a precarious 2-17, England enjoyed a rare wicket-free session to start the day as Root and Malan doubled up from their Gabba efforts to take the tourists into the long break with an unbroken century-plus partnership in front of 27,613 fans at Adelaide Oval.

But when Root nicked all-rounder Cameron Green to stand-in skipper Steve Smith for 62 and Mitchell Starc dismissed Malan for 80 via the same method, the touring team’s soft middle-order underbelly was exposed and their last eight wickets fell for the addition of just 86 runs.

Ollie Pope perished for five via a bat-pad chance of Lyon before Jos Buttler compounded his costly wicketkeeping errors by departing for a duck when he edged Starc to David Warner at first slip.

The first person to congratulate Marnus on his catch … was Marnus! ???? #Ashes pic.twitter.com/am8iudsccr

Ben Stokes (34) fell chasing quick runs after Lyon had started running through the tail by getting rid of Chris Woakes (24) and Ollie Robinson for a duck.

Green’s pace and hostility was yet another bonus for Australia – the young all-rounder has twice dismissed the world’s highest run-scorer for 2021 in Root this series while he added Stokes to his growing list of victims when he inside-edged the West Australian onto the stumps.

Stuart Broad and James Anderson provided a little bit of resistance and a slice of comic relief in their brief last-wicket stand of 16 as England were bowled out for 236, a run shy of half Australia’s total after they had declared 24 hours earlier at 9-473.

Smith elected not to enforce the follow-on after Starc claimed his fourth wicket in Broad, giving his bowling attack a chance to rest and likely begin the fourth-innings formalities late on Sunday afternoon so they can take advantage of the extra swing under lights. 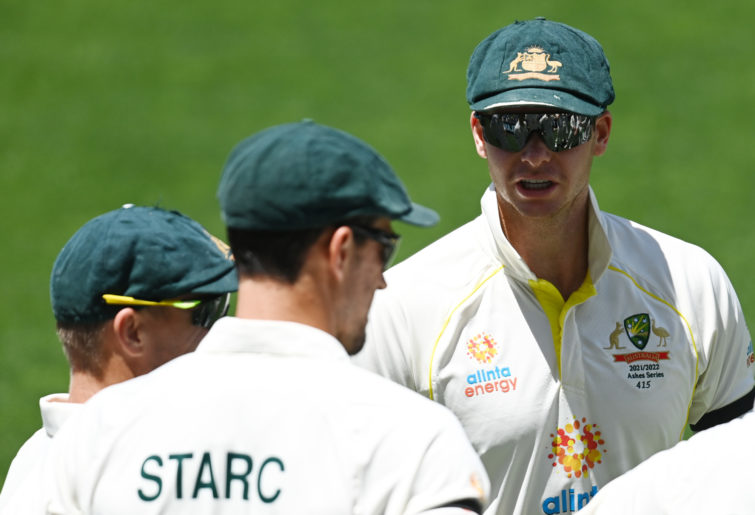 Steve Smith of Australia talks to his players before day three of the second Test. (Photo by Quinn Rooney/Getty Images)

Faced with a tricky 17-over session under lights, David Warner headed out to open with Victorian left-hander Marcus Harris, who was under immense pressure to perform to save his spot in the team after failing in the first innings of each Test.

Warner departed for 13 after he was run out following a dreadful mix-up with Harris, who remained unbeaten on 21 with Australia at 1-45, a lead of 282, with debutatant Michael Neser on two, who came out as nightwatchman for the final few overs under lights.

With two days to play, the match is set up for a second straight lopsided triumph for Australia despite missing two of their best players – captain Pat Cummins as he serves his COVID close contact biosecurity protocols and injured pace cartel comrade Josh Hazlewood.

Cummins is certain to return for the MCG Test while Hazlewood is hopeful of overcoming his side strain to also be part of the Boxing Day contest.

If they cannot somehow jag a draw in Adelaide then England need to win all three of the remaining matches to regain the urn. Avoiding a 5-0 whitewash will be a more realistic goal.