It doesn’t matter how your batting shapes up if your bowling attack can’t take 20 wickets. Australia, missing two guys who will go down as all-time fast bowling greats, still managed to produce a relentless and ruthless attack, while England’s die was cast with one crazy decision at the start.

England just haven’t helped themselves. Joe Root suggested the teams are closer than the two Test scores have suggested but how hard do they want to make it on themselves?

If they’d picked the right teams it would have been closer. How Mark Wood doesn’t play this game is insane. You saw what the pace of Jhye Richardson did on Monday, along with the zip from Mitchell Starc and Cameron Green. who had Jos Buttler, well set at the time, caught on the crease, jumping around.

England’s only fast bowler who does that is Wood and the series was alive. They’re not controlling their controllables. They are not picking their best team.

Their selection might have been a gift to Australia but that’s not to suggest the win wasn’t completely deserved.

Richardson bowled really well today and they backed him. I had suggested that if Josh Hazlewood remains sidelined for the Boxing Day Test if Monday was a shootout between Richardson and Michael Neser to retain their spot.

Richo put that one to bed.

He’s different to the others. Being shorter, he’s skiddier. Compared to Neser on Monday he hit the bat really hard and surprised the batsmen a lot of the time.

I felt like they really struggled to pick him up and he’s got a big future. I could see on some wearing wickets overseas, particularly in the sub continent where it’s a bit up and down and will go reverse, Richardson’s the type of bowler that will succeed.

He put one through Chris Woakes that seamed about 30 centimetres. Overall Australia bowled fuller than the English fast mediums, even fuller than Anderson, one of the greatest swing bowlers of all time.

Mitchell Starc produced a 9 out of 10 performance. He clearly appreciated the opportunity to be the number one quick, the spearhead.

Instead of having any doubts about it, he just led from the front and he had a fine Test match. So for all the stuff we were talking about him last year, he has started the season all the summer in cracking form. When all is said and done he might have a massive Ashes series.

He’s definitely someone that puts himself under a lot of pressure in searching to get better. 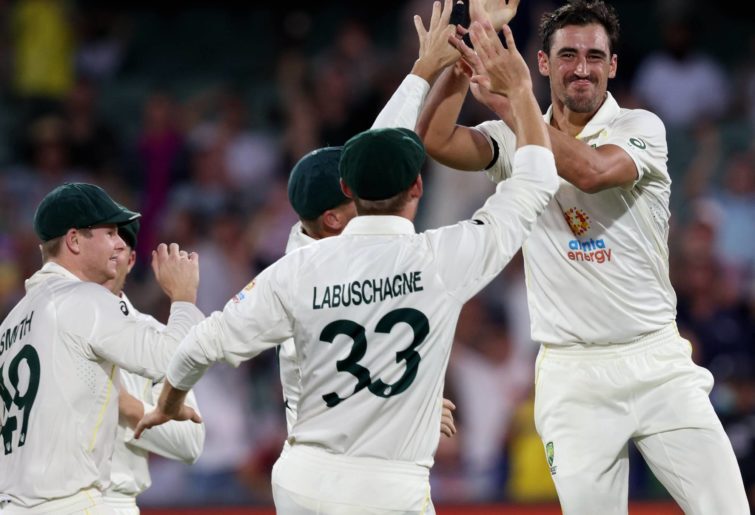 Last season would have weighed on him and there were family issues there as well.

There was a feeling, and I shared it, that if he’s not swinging the ball is there a spot for him? I don’t see him as a change bowler because accuracy and bounce aren’t his strong suits compared to others.

If you said Starc was to be the most dominant bowler in the game I would have thought that it would have been massively swinging conditions, but it wasn’t.

Where I think he’s improved is his accuracy, which was as good I’ve ever seen it.

Generally he’s a little different to other left handed fast bowlers who are always threatening the outside edge of right handers because of their angle, because he can be a little skiddy and flat and a little too wide to right handers.

But I felt in this Test match that natural angle was always a threat. He must have been working on his technique.

The run up looked good, the momentum looked good all the way through and in the crease, and it must be just coming out of his wrist and fingers well.

He was quite bouncy and accurate so he didn’t need the swing. There were a few times he went around the wicket and I think that’s a legitimate option for him if it’s not swinging a lot.

I’d love to have a little chat to find out how much confidence it gave him being the number one. There were a couple of ODI series we played when Glenn McGrath was injured and I got the first over and really thrived in that position.

I used to wonder ‘why can’t I think like that when McGrath’s playing?’.

It does change it but I hope when Cummins and Hazlewood come back, Starcy can keep that mentality.

To be fair it was only a little improvement on the first Test where he also bowled well.

I thought the mechanics and the way the ball came out – and not just that Burns ball but overall – wre on point and he bowled better with an old ball even though it wasn’t swinging at the Gabba.

Sometimes things just click, particularly for bowlers. When you’re searching for rhythm, you can’t find it.

But it can be just releasing one ball right at training and all of a sudden you’re back.

We were hearing reports that he was in form but you didn’t know whether it was propaganda within the team.

He showed strong body language too. He hurt his back when he was betting and, besides a little bit of feeling around there, if he was hurting or agitating when he bowled you wouldn’t have known it.

By the last Test last year there wasn’t the rhythm. Confidence can fluctuate so quickly at the top level, and it can easily go the other way. And that’s where you’ve got to be able to coach yourself a little bit.

Whether he’s just simplified a couple of his cues or whether it’s just … fast bowling has a feel element to it which is frustrating at times because you can’t put your finger on it.

I’d encourage him to write what that feels like and get a highlights package of this game to watch and visualize positively the way he can ball when it’s not swinging massively.

For cricket people who love their part time bowlers, and they’re out there, the Test was a real treat. You got to see Root and Malan bowling together, Robinson throwing down offies, then Marnus and Travis and Smithy. It could be the greatest collection of bowlers in Ashes Test of all time!

England’s part timers actually took some wickets too, so at least they edged something.