It was a milestone weekend for some Jets while the Melbourne sides and Sydney FC flexed their muscles in Round 3 of the A-League Women’s.

Centurion Cassidy Davis makes history
To play 100 games of professional football is a massive achievement. To do so as a woman is even more special. The league structure is not built for women to be successful for an extended period of time.

The A-League Women’s season is painfully short, condensed into a few months, and usually only 12 games long. Players also juggle work and study commitments outside of football. Trying to build a long career under these circumstances is not easy. As such it requires a certain longevity to crack major milestones.

It took nine years before the competition recorded its first centurion and in the years since another 31 women have joined the 100 club. With a few years head start and a much longer season, 189 men have achieved the same feat in the A-League Men’s – many have also reached the 200 and 300 game mark.

The Newcastle Jets versus Western Sydney Wanderers game saw Emily van Egmond and Cassidy Davis etch their names into the 100 club. For van Egmond, the 100 league appearances nicely complements the 100 Matildas appearances she also racked up earlier this year.

Davis however presents as the quintessential A-League Women’s player. A tough holding midfielder who works for the club in the community department while studying to be a teacher.

She debuted in 2013 and hasn’t missed a game since. Over nine seasons now, Davis has managed to not only juggle both of her worlds, ensuring she has the financial ability to play in the league, she has also been injury free and in form enough to warrant selection week in and week out.

Hers is a remarkable achievement which has the potential to become even greater as she closes in on the longest consecutive games streak held by an Australian national league player – man or woman. 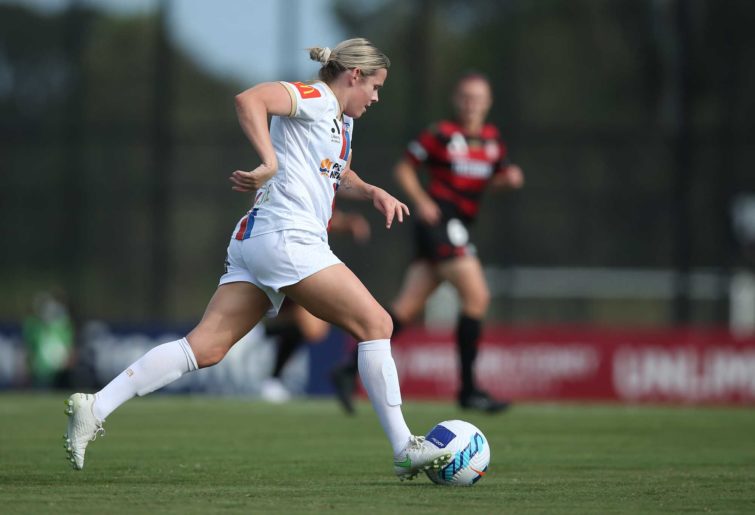 Cassidy Davis of the Jets (Photo by Jason McCawley/Getty Images)

They’re going to win it 3-2
Melbourne Victory recorded a 3-2 win over Brisbane Roar. For the team in blue, it is now three wins from three games. For the team in orange the loss sees them winless to start the season.

With no Kayla Morrison and no Amy Jackson – and a new centre back signing reportedly still a few weeks away – Jeff Hopkins was required to shuffle his defensive set up.

Pre-season, Victory looked like the kind of team that had enough defensive solidity to keep clean sheets and enough firepower to embarrass other sides. On paper they looked like a team that could easily knock teams about 3-0.

Morrison’s injury and Jackson’s suspension saw Courtney Nevin move to centre back and 16-year-old Alana Murphy enter the midfield. The side which looked so sure of itself defensively now looked a little leaky. But the saving grace for this Victory side was and will continue to be the forward line.

Harriet Withers was in everything on Saturday afternoon. Lynn Williams scored another as did Catherine Zimmerman. Brisbane deserved their two goals, and arguably could have scored more with Victory’s defence being caught out with balls in behind time and time again. Shea Connors and Larissa Crummer found the back of the net but ultimately the Roar couldn’t find goal number three which would have seen them pick up some points.

And so the team that looked like a safe 3-0 proposition is now a 3-2 kind of side. Or perhaps a 4-2 type of team. Clean sheets seem a little out of reach for the moment but scoring more goals than the opposition – which is ultimately the aim of the game – looks strong as ever.

Melbourne City makes a move
After a season in the wilderness where Melbourne City didn’t look very Melbourne City-like at all, Rado Vidosic’s side is back after recording a 3-1 victory over Adelaide United.

Across the park, City looked strong. Holly McNamara continues to impress up forward, belying her age and relative experience. Emma Checker continues to lead from the back supported by Melissa Barbieri in goal.

The team has firmly announced themselves as one of the top three sides after the opening three rounds.

Sparks fly for Reds, Wanderers
For Adelaide it was disappointment once again. However, Adrian Stenta’s side continues to show glimpses of what they could be. Reassuringly for Reds fans, the team is set to welcome American defender Kayla Sharples shortly while Dylan Holmes’ re-signing will add some oomph to the midfield.

With the foundation that is already their plus these two inclusions, Adelaide has the potential to emerge as a contender for finals. The worry, as it so often is in the A-League Women, is whether or not time will be on their side.

In a similar fashion, the Wanderers finally showed some real promise in their 1-1 draw with the Newcastle Jets. From Malia Steinmetz and Bryleeh Henry’s inclusions to the starting XI, Ashlie Crofts’ goal off the bench, the attacking options provided by the likes of Sheridan Gallagher and Rosie Galea, this was a side that looked like it was capable of scoring.

Whether this spark was a false start or the beginning of something will reveal itself next week with another Sydney derby incoming.