UK View: Poms search for answers as 'comically bad' errors leave them on brink of sackings and humiliation

There was talk of a slow death, rigor mortis and graveyards as the British press pack sifted through the bones of England’s error-riddled Ashes campaign with Australia looking to nail down the series coffin in Melbourne.

The Australians, without two of their front-line bowlers, still outplayed the tourists in a crushing 275-run triumph to seize a 2-0 series lead and now head to the Boxing Day Test showpiece at the MCG poised to unwrap their Christmas gift.

“Australia are 2-0 up and unless Jos Buttler’s resilience is a turning point, another Ashes tour will become a graveyard for an England captain and coach,” forewarned The Telegraph’s Nick Hoult.

“This time they have been outplayed in Brisbane and Adelaide where Australia were without two bowlers in the world’s top four and their new captain.

“There are three Tests remaining, if the pandemic allows, and recent history suggests they will be a landslide for Australia, unless the MCG pitch is another dead zone.

“If the series ends four or five nil, it is hard to see both of Joe Root and Chris Silverwood surviving. A double change is less likely, but Ashes hammerings must have consequences.”

There was a sense of the macabre as the Guardian’s Barney Ronay began an early post-mortem examination of England’s ‘comically bad’ plans for the Ashes.

“The undertaker’s cart may be creaking across the cobbles but the ashes of these Ashes are not quite ready to be scattered. At 2-0 down it is still possible to cling to the prospect of a miraculous defibrillation in Melbourne. Perhaps England’s weirdly mute selector and coach, Chris Silverwood, will see progress in this most recent setback,” Ronay castigated. 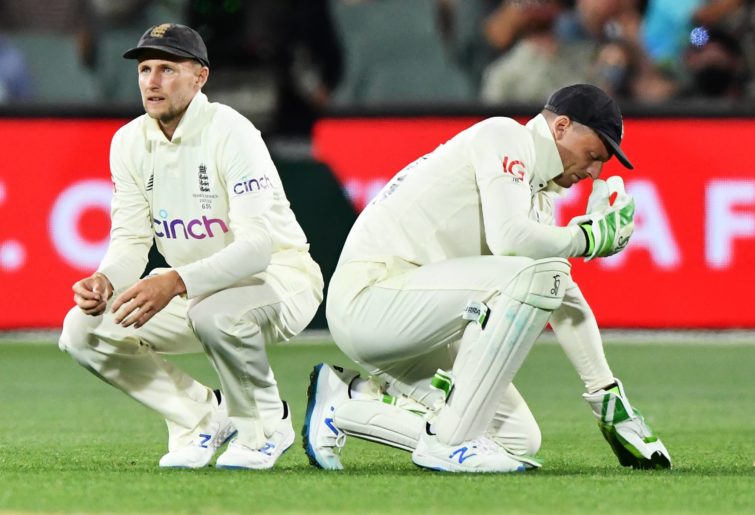 “Capitulation over five days in Adelaide follows capitulation over four days in Brisbane. Jos Buttler’s valiant defence on the final afternoon at least provided some sense of stiffening, of a rigor ante-mortis.

“Either way, England are faced not just with one must-win Test, but three of them in quick succession.
“Having spent two years planning – and over-planning – for this series, England’s plans have been comically bad.”

The Daily Mail’s Lawrence Booth pointed to the avalanche of historical evidence confronting England in Australia, saying “you’d have to be deluded to bet against” Australia.

“England made Australia work for it, but in the end the second Test went the way it was always going to go when the final day began at Adelaide,” Booth wrote.

“And if Joe Root’s team did well to string out proceedings until the game’s final session, with Jos Buttler battling away for more than four hours before treading on his stumps, then Australia’s victory by 275 runs accurately reflected the gulf between the sides.

“Christmas has come early for a side led variously by Pat Cummins and Steve Smith, and they can now wrap up another home Ashes win when the third Test gets under way on Boxing Day at the MCG. You’d have to be deluded to bet against them.

“England have now lost 11 of their last 12 Tests in Australia. Put a different way, it’s now 4,000 days since they last won in this country – a joyous innings triumph at Sydney in January 2011 that increasingly feels like ancient history.”

The Sun’s John Etheridge said several members of the team were under pressure to hold on to their places for the Melbourne showdown.

“Batsmen Rory Burns, Haseeb Hameed and Ollie Pope are under most pressure while probably two of Chris Woakes, Ollie Robinson, Stuart Broad and James Anderson will be replaced on the bowling front,” Etheridge said.

“The futures of Root and Silverwood are already under discussion and the scrutiny will only grow in the coming weeks.”

Flinty Geoff Boycott thundered in The Telegraph: “It’s time we accepted that our batsmen are not good enough. The two openers are walking wickets and the Aussie bowlers are queuing up to get at them.

“England should consider opening with Dawid Malan. His technique of staying back, judging what to leave and playing straight is good. It is so important for team morale and to achieve big totals that you have successful opening bats.”

Alastair Cook, the man who preceded Root as England captain, criticised England’s selection which is now in the sole hands of coach Silverwood and Root after the sacking of Ed Smith as national selector.

“Ultimately England are ruing the fact they’ve made too many mistakes in these two games,” Cook said on BT Sport.

“The fielding isn’t as good as Australia and the decision making off the field up to this point hasn’t been god enough. You can’t afford on a tough tour like this to make mistakes because it’s hard enough anyway. The players have as tough couple of weeks ahead now.”

The survival instinct was strong in Buttler’s 207-ball epic after a wildly contrasting display behind the stumps in Australia’s first innings with several costly dropped catches.

“If England had started the Adelaide Test match as they finished it, they might have given themselves a chance of winning, let alone drawing. But, of course, they didn’t, because they rarely do in Australia,” Simon Wilde scoffed in The Times.

“They only come to life, only start to express themselves, when their reputations are on the line, their futures at stake.

“Buttler has previous in this respect. His maiden Test hundred — and his only century in his first 46 Tests — came in a game against India in 2018 when all was effectively lost; score 521 or bat out two days for a draw was England’s task. In other words, the pressure was largely off, as was the case in Adelaide where no one was giving them a price. The survival instinct is clearly strong.”

Mike Atherton reflected on the fine margins that could have led to a pair of ducks for Buttler instead of his fighting rearguard knock.

“It was a cruel way to go after an innings of astonishing self-restraint (26 from 207 balls, including only nine runs in the extended afternoon session), although after a duck in the first innings and three dropped catches, Buttler knew he had ground to make up,” Atherton observed in The Times.

“He is old enough and experienced enough to know that the encomiums that will follow his fine rearguard action could have been obituaries for his Test career instead, had Alex Carey accepted a chance before he had scored off the eighth ball faced. Such is the game: Buttler has now been given an opportunity to turn his tour around.”

“An Ashes series examines the strength in depth of each country. And the superior strength of Australia in red-ball cricket was proven once again when they brought in Jhye Richardson for Adelaide, and he took a five-wicket haul in only his third Test,” Berry noted.

“It sums up everything you need to know about the respective firepower of the two teams in Adelaide that Richardson was only the third fastest Australian bowler, averaging 137 kph, yet faster than any of the five seamers whom England chose to deploy on a turning pitch.”