Speak it in a whisper, but Quade Cooper should be Australia’s number 10 at the World Cup in France in two years’ time.

Nobody on the face of God’s green one would have even considered that statement before the 2021 season began. They would have burst out laughing instead.

No-one is laughing now. With the new model Cooper reintroduced for the first game of the September double-header against the Springboks on the Gold Coast, the Wallabies embarked on a five-match winning run. Quade started and directed the play in all of those games.

Without him, Australia lost all of their other six international games in the waning months of 2021 – three versus New Zealand in the Bledisloe Cup series with Noah Lolesio, and three on the end-of-year tour with James O’Connor at the helm.

Dave Rennie should do everything in his power to ensure that Australia gets to the World Cup with Quade Cooper fully fit and available for selection. If necessary, he should even box him up in cotton wool for added protection.

Probably not even the Wallabies’ head coach could have envisaged just how right he would be when he took a punt on the ex-Reds navigator against South Africa:

“He’s the best option. I think he’s been with us around four weeks. He’s trained really well. We felt we still need more balance to our game, and he’s got the skill set to deliver that, whether it’s by hand or through the boot,” Rennie told the Sydney Morning Herald.

“Quade’s been really impressive, contributed massively to the group around discussion and his experience has been great.

“He’s got an arm around some young guys and we couldn’t be happier with him. He’s certainly trained very well. He’s had another good training this morning and we expect him to put that on the park on the weekend.

“There’s certainly no panic. We’re basing selections on what we see. Some guys’ selections are based on recent test matches. For Quade, it’s been training.

“He’s trained really well. He was very close to selection last week and got the nod this week. We’re trying to grow our game. We think he’s the right man to get us around the park.
Quade will play within a structure. That’s really important for us. But as I mentioned, he gives us balance.
“He’s grown up, he’s matured and is desperate for another opportunity.”

Coming in fresh from outside the country with no hang-ups or prejudices, it is easy to see Cooper through Rennie’s eyes. He observed a maturity in his life and attitudes outside rugby which mirrored his range of skills on it.

He saw a man who was prepared to impart the knowledge accrued over a long professional career and willing to be a mentor to the younger players. Happy, in other words, to do anything he could to help the team, with no sense of expectation or entitlement. Pure Quade – no strings attached.

Rennie’s sentiments were echoed by the reformed one himself.

“It’s exciting. I’m very grateful for the opportunity to be back. It just means [something] totally different than what it used to in terms of who I am as a man, as a player and what it represents,” Cooper told reporters in September.

“Being a young kid coming into the arena and game so early, I struggled with the identity of who I was as a person.

“My identity for so long was Quade Cooper: rugby player. I didn’t really know how to be just myself or what that was. You think about the last five years, I haven’t played at that high level. I was able to have time to go away and see what were the things that mattered to me day to day. This is just an added bonus.”

Within five short games, Cooper was able to establish himself as one of the touchstones of Wallaby success. Although he will be 35 years old at the time of the next World Cup, it will be well worth Rennie’s while to keep him on the road for as long as possible. If that route leads all the way to France, so be it.

What does maturity on a rugby field really mean? First of all, it means the ability to see the big picture under the pressure of immediate tasks, which have to be performed quicker and more decisively than at any other level of rugby.

Two simple but lucid examples of great decision-making, of executing skills while still seeing the big picture, occurred in the first game between Australia and Argentina. Both resulted in tries for the Wallabies: 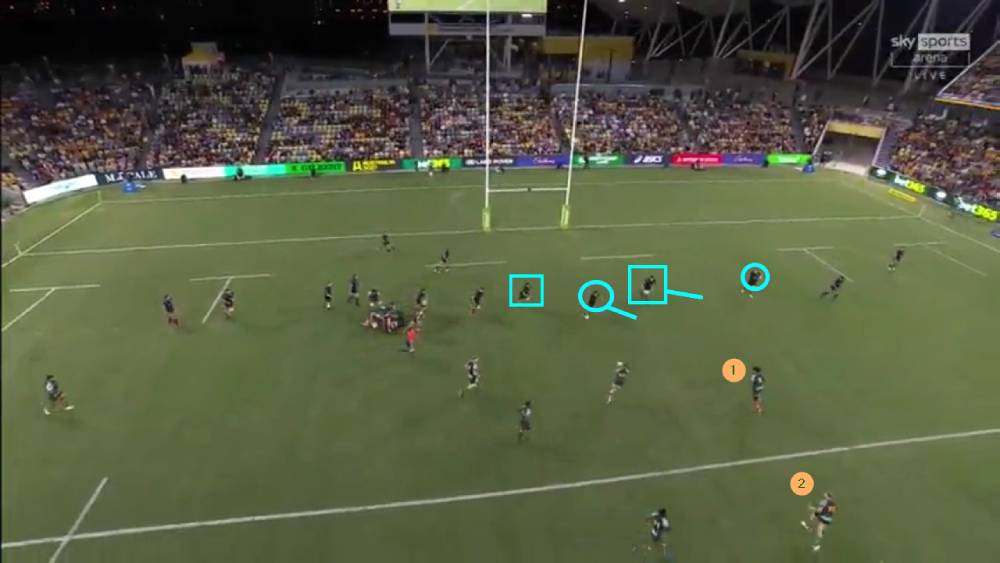 Quade has two options, he can either go short to Bobby Valetini, or pass behind to Reece Hodge. Why does he choose Hodge? Because he has identified that there is a mix of Argentine tight forwards (in the rectangles) and backs (circled) in the line. The extra width of the pass will pull the space between a back and forward further apart, and so it proves as Hodge penetrates the gap between second row and centre.

The second try also exemplified Cooper’s excellent grasp of the big picture. As play came back in off the left touch-line, he is already assessing the situation with the main Argentine full-back (circled) defending just outside the far post: 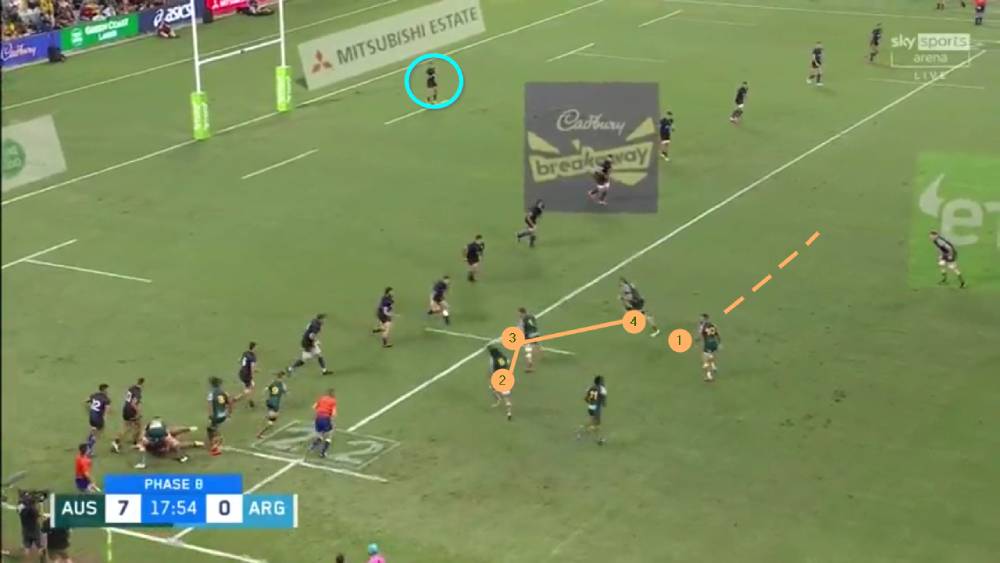 Quade is probably already eyeing the zone just in behind the line for a short kick, but he would like that full-back to push across field a little more. He gets his wish on next phase: 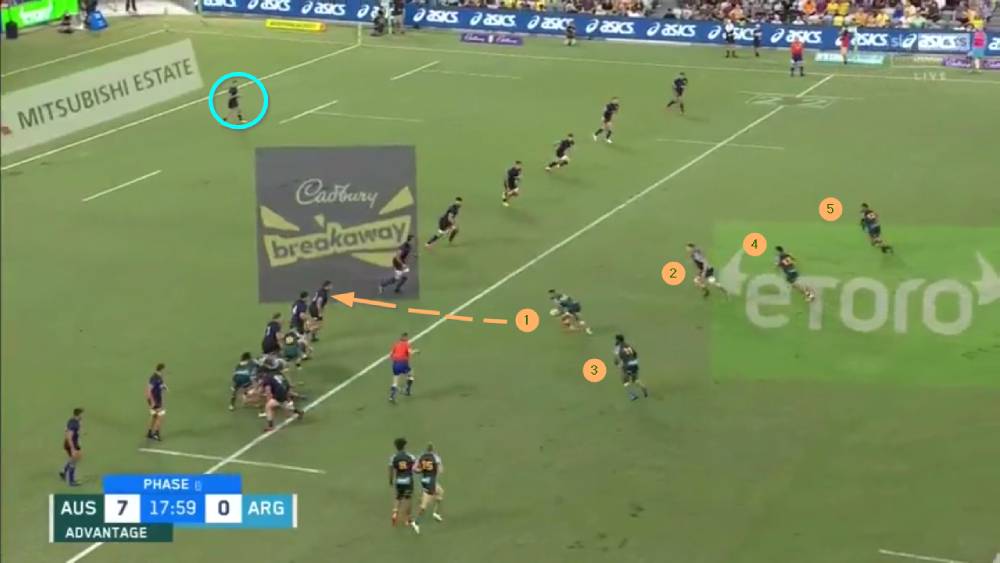 The full-back is now out near the left 15m line, so Quade flattens up on the ad-line and brings a group of Wallabies with him. Len Ikitau is first to the ball and his centre partner Samu Kerevi is on hand to finish the move.

The second aspect of maturity for a number 10 is accurate feel for the risk-reward balance on attack. Quade Cooper used to have a reputation for taking outrageous risks, but in the Rugby Championship he stayed within himself and within the limits of the system: 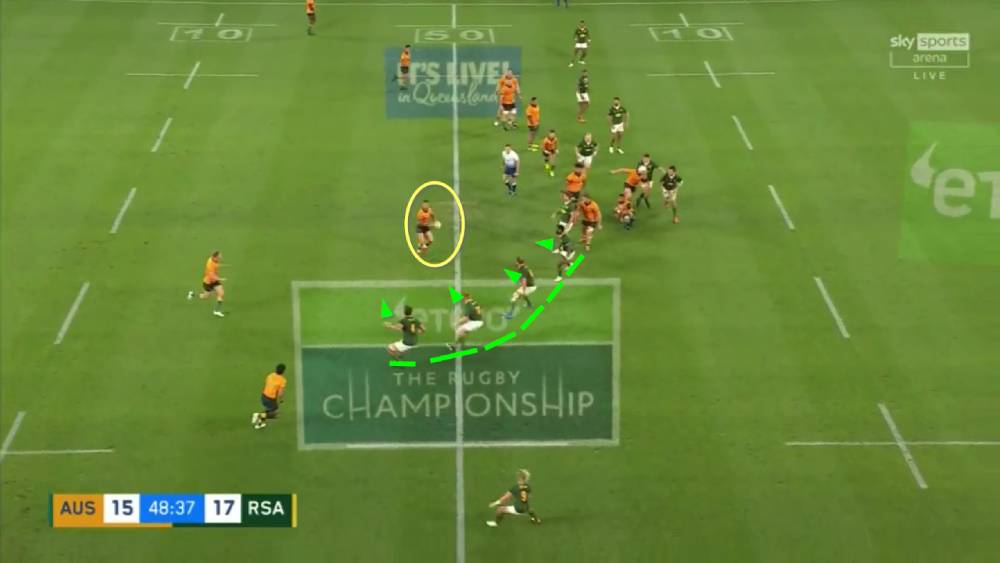 Young Quade might have been tempted to take on the defensive line, defy the odds and fire the miracle ball out to Pete Samu. Old Quade takes the sensible option and sets up a kicking opportunity for Nic White instead:

In the twilight years of his career, Quade Cooper is also actively seeking out those same contact situations which could be such unsettling flashpoints for him:

Both of these instances follow the modern trend where the passer saves the attack an extra cleanout body by following the ball-carrier and re-rucking over the top of him. In the second instance, Quade is taking out the toughest on-baller in the Southern Hemisphere, Argentine hooker Julián Montoya as the first man up.

This longer sequence illustrates the difference this can make to a cohesive multi-phase attack:

Quade sticks his head in over Michael Hooper, and Nic White runs the show on the next two phases, with power runs by first Rob Leota, then Taniela Tupou back to the short side.

The Wallaby veteran even led one memorable winning counter-ruck against the Springboks!

In the 2011 World Cup season, (then) Wallaby head coach Robbie Deans first came up with the novel idea of shifting Quade Cooper to full-back on defence, in order to spark counters from the backfield. It was a move the All Blacks specifically targeted in their semi-final against Australia:

They exploited Quade’s lack of familiarity with the position mercilessly and niggled at him in every physical confrontation. Things had moved on ten years later, with Cooper error-free at the back and remaining calm and collected under pressure:

Instead of running the ball back at all costs, Quade Cooper has been transformed into the master of the strategic kicking duel:

Against all the odds, Quade Cooper is playing some of the best football of his career in his early thirties. And there may yet be more to come.

Summary
‘It’s never too late to learn’ the old saying goes, and this has been especially true of Quade Cooper’s international rugby career. He has done the most difficult thing, trusting himself to be a beginner again, and dropping the obvious sense of entitlement that his talent brought with it in his younger days.

That has in turn allowed him to impart his considerable body of knowledge to those around him, and take younger players under his wing. He has been a strong voice in discussion, and an important part of the think-tank both on and off the field.

Other developments – the ability to play within the discipline of a system, maintain the run/kick/pass balance, and involve himself more in the nitty-gritty in contact while managing the physical flashpoints better – have all come along naturally for the ride.

There may yet be sufficiently few miles on the clock for Quade Cooper to make it all the way to France in 2023, with the possibility of another semi-final against the All Blacks on the horizon.

Now wouldn’t that be a shot at redemption, 12 years after his last World Cup encounter with the men in black?