We should be thankful we had any football to watch at all on Boxing Day given the spate of COVID-related postponements, yet Macarthur FC’s ticket prices continue to raise eyebrows.

It’s hard not to sympathise with the Australian Professional Leagues and the clubs affected by a raft of COVID postponements, with Perth Glory almost missing Christmas entirely after finding themselves stranded in Brisbane last week.

Glory’s clash with Brisbane Roar in Redcliffe on December 18 was postponed after Pacifique Niyongabire was diagnosed with COVID-19, forcing the entire 35-person travelling party into quarantine as the club struggled to get back into Western Australia.

Ultimately the Glory players completed seven days in quarantine in Brisbane before they were allowed to return home on a charter flight to complete the remainder of their 14-day quarantine stint at home in Perth.

And Glory’s struggles to make it back to their home state was a reminder of just how difficult it is to schedule a transnational competition like the A-Leagues in a country where COVID-19 restrictions differ from state to state.

But quite why Macarthur FC continue to charge some of the highest ticket prices in the A-Leagues is a bit of a mystery.

Despite what certain critics say, the business case for adding the Bulls seems solid enough.

The south-western suburbs are one of the fastest-growing regions of Sydney and by refusing to base themselves out of Campbelltown permanently, NRL club the Wests Tigers have made it clear they don’t view themselves as representatives of the region.

The Bulls are also close enough to the Western Sydney Wanderers to market themselves as genuine local rivals, yet far enough away from Parramatta to build their own fan-base. 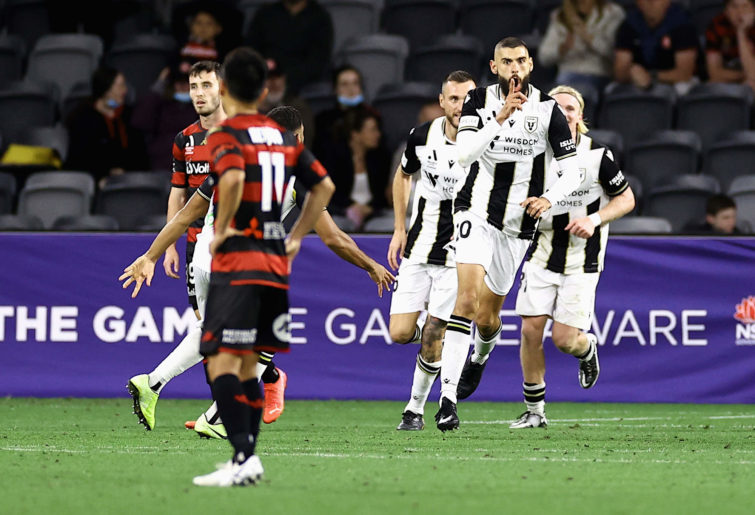 But building a regular match-going fan-base is hard to do given how much Macarthur charge casual fans to attend a game at Campbelltown Stadium.

With the Bulls closing general admission ticket sales well in advance of the game, the cheapest adult casual ticket on game day cost fans $45, plus a $5.70 booking fee.

Away fans were slugged the same price for the privilege of sitting in the corner of the eastern stand, while those wanting an elevated view in one of the few seats undercover were charged a staggering $65 plus booking fee for a ‘platinum plus’ ticket in the western grandstand.

All this despite the Bulls supposedly paying a peppercorn rent to Campbelltown City Council to rent the stadium.

It comes on the back of Macarthur chief executive Sam Krslovic blaming Central Coast Mariners fans for not being “proactive enough” to secure a 10 per cent discount on the cost of entry into their recent game at BlueBet Stadium – a discount which Mariners membership and ticketing manager Iain Shand later claimed didn’t exist.

Krslovic is perhaps better known as a former president of National Soccer League stalwarts Sydney United, and his attitude towards A-Leagues fans certainly comes across as more old-school than orthodox.

The decision to place the club’s active supporter group in the corner of Campbelltown Stadium – and charge accordingly – means that unlike city rivals Sydney FC and Western Sydney Wanderers, the Bulls never run out to a raucous home end behind one goal.

There’s no denying that Krslovic and chairman Gino Marra know their way around Australian football, and on the pitch, the Bulls have assembled one of the most formidable squads in the league.

But it’s hard to understand their ticketing strategy.

There wasn’t a huge crowd in the stands last night – although given the latest COVID-19 outbreak across the city that’s probably understandable – but it was the away fans who went home happy after Sydney FC strolled to a comfortable 3-0 win.

Melbourne Victory, meanwhile, downed Western United 3-1 in a clash in which the visitors provided some decent travelling support.

Which all begs the question of why the A-Leagues even exist. Is it just so a couple of well-connected businessmen can run a football club any way they see fit?

Or is it, as we have long assumed, for the fans?