Two penalties from Craig Goodwin helped Adelaide along while George Blackwood, who was making his first start since returning to the club, and Javi Lopez also got on the scoresheet.

“So far this season the players have put in a tremendous effort and played some good football and just haven’t got the rewards,” Adelaide United coach Carl Veart said of the maiden victory.

“I’m happy for the players that they got their rewards tonight for the efforts.”

The home side took just seven minutes to break the deadlock.

The Reds recycled a corner which Wellington failed to clear, with Goodwin volleying a Ryan Kitto cross into Blackwood and the ricochet wrong-footing Phoenix keeper Alexander Paulsen. 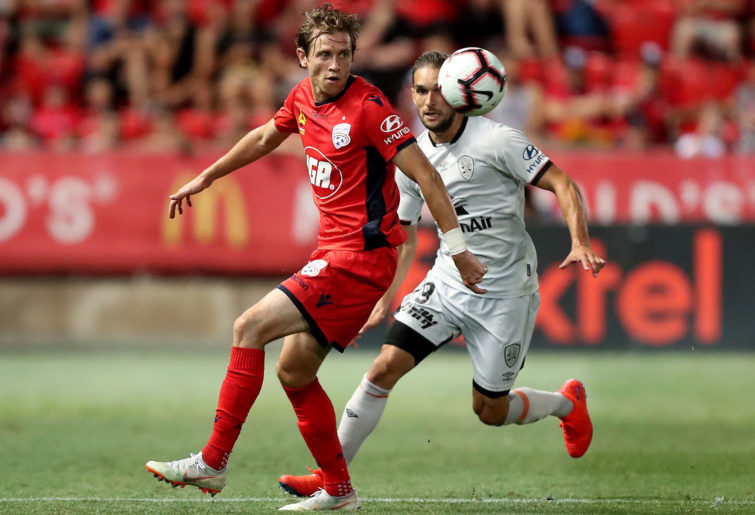 Stefan Mauk tested Paulsen five minutes later, picking up a loose ball on the edge of the area and shooting powerfully, forcing the young Wellington custodian into a fine save.

The Reds were forced to substitute their keeper James Delianov on the half hour after he was hurt in a collision with Wellington striker Ben Waine.

The injury handed a debut to 16-year-old shot-stopper Steven Hall.

Adelaide continued to attack as the half wound down with Paulsen making good saves to deny Mauk and Kitto.

Wellington coach Ufuk Talay felt his side were still a chance after the interval before Adelaide grabbed their second.

“Coming in 1-0 at halftime we thought we were in the game,” he said.

“And then we could’ve dealt with the situation a little earlier and then we give away a penalty, which I think kills the game.”

United doubled their lead early when Blackwood was brought down inside the area by Tim Payne after a long through ball from Bernardo.

After initially being waved away by referee Daniel Elder, he awarded a spot kick after VAR intervened.

Fifteen minutes later Bernardo weaved his way into the box and dazzled James McGarry, who brought the winger down. Goodwin picked the other side and again sent Paulsen in the wrong direction.

Hall had little to do in his Reds debut in goal but did produce a strong save, denying a powerful effort from Waine from just inside the area.

Adelaide eventually added a fourth with Spaniard Javi Lopez finding the net in the 80th minute with his first goal for the club.

Substitute Yaya Dukuly led a counter before the ball eventually found Kitto out wide. The fullback looped a left-footed cross to the back post where Lopez charged through and volleyed home.