Back then Lopez’s goal came in Europe on a hot August night on the outskirts of Barcelona, when he skippered the Catalans to a laboured 3-1 win over Ukrainian minnows FC Zorya Luhansk in Europa League qualifying in 2019.

Espanyol enjoyed a decent European run that season, slogging their way through the qualifiers and finishing top of their Europa League group, before ultimately going out to a rampant Wolves in the knock-out stage.

It’s a long way from a packed Molineux to the more sedate confines of Coopers Stadium, but the fact is a player of Lopez’s pedigree probably wouldn’t be playing in Australia if it wasn’t for COVID-19. 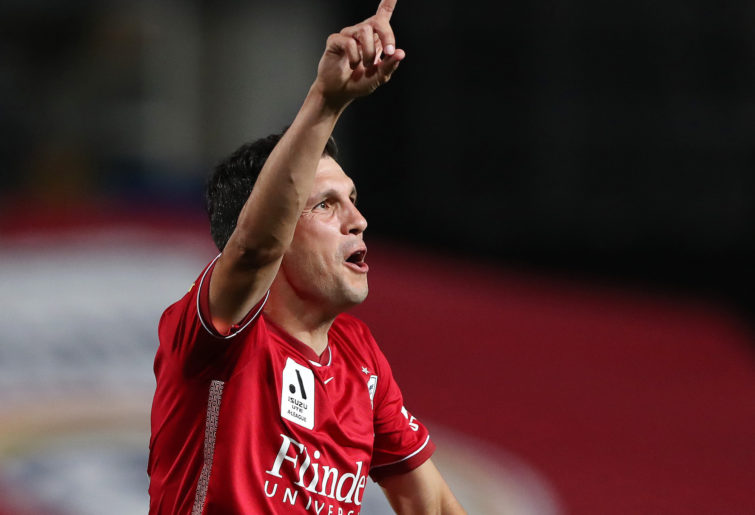 It’s easy to forget with all the doom and gloom around the world just how lucky we are to be still watching football.

And it’s even easier to remember, given the spate of postponements across the A-Leagues, just how quickly this can all be taken away from us.

So there was something refreshing about watching Adelaide United dish out an old-fashioned 4-0 thrashing to Wellington Phoenix on Saturday night, even if the sight of visiting coach Ufuk Talay clashing repeatedly with officials was something we’ve seen before.

And Talay was justified in at least some of his complaints, not least after VAR intervened to award Adelaide a penalty seconds after Michael Jakobsen appeared to foul Phoenix striker Oskar van Hattum at the other end.

Referee Daniel Elder originally waved play on shortly after halftime, but video assistant Shaun Evans decided Tim Payne’s challenge on George Blackwood was worthy of a spot kick and the contest was pretty much done and dusted after that.

Adelaide secured a second penalty soon after – that one was cut and dried – but what was notable about Craig Goodwin’s two expertly-dispatched spot kicks was his stuttering run-up.

If you watch a replay of both goals, Goodwin just about continues moving his non-striking foot towards the ball at the end of his run-up – but only just.

There’s not a whole lot of forward momentum from the Adelaide attacker when he practically stops and waits for the goalkeeper to move, even if he’s undoubtedly an excellent penalty taker.

Nothing will happen with Goodwin’s run-up, of course, although something should probably be done about the effects microphones being placed so close to the technical areas on match days.

I’m all for a decent rant – and goodness knows the likes of Talay and Carl Veart can provide them – but the steady stream of audible invective aimed at officials from coaching staff is a bad look for the game.

But the reason it happens is the same reason nothing will ever get done about it, because that’s the way the A-Leagues has always done things and presumably will continue to do so until the end of time.

There have been a few encouraging steps taken in the A-Leagues 2.0 era, but if we’re being perfectly honest, there has been lots that looks exactly the same as it did under the previous regime.

That’s a minor quibble in the grand scheme of things, given how difficult it is to even schedule football in these COVID-plagued times.

The Australian Professional Leagues deserve credit for keeping the men’s and women’s leagues going in the face of this unrelenting pandemic, even if plenty of fixtures have recently been postponed.

They may ultimately end up having to curtail the season just to fit everything in.

Here’s hoping it doesn’t come to that, even if things are looking rather bleak right now.

Because if Saturday night proved anything, it’s that we all just want to watch some football.

Let’s hope 2022 provides a lot more of that, with a few additional collector’s items from Javi Lopez thrown in.