The more things change at the Warriors, the more they stay the same.

After another off-season with significant alterations made to the roster, the team enters the new year facing the same old dilemma – will they be able to string enough quality performances together to make the finals?

The answer each season is usually no.

With the departure of Roger Tuivasa-Sheck to the New Zealand rugby ranks, the Warriors are in need of a new leader and a fresh face to keep fans interested despite the team spending a third straight season on the wrong side of the Tasman due to the COVID-19 pandemic.

Tohu Harris has been named the new captain but will miss the start of the season due to the ACL tear he suffered in July.

The marquee name replacing RTS as the club’s biggest name is Shaun Johnson, returning after three years at the Sharks following his acrimonious exit at the end of 2018.

Johnson is still an elite attacking weapon and the challenge for coach Nathan Brown will be settling on a complementary halves partner. Kodi Nikorima is probably the ideal foil for a creative spark like Johnson whereas young gun Chanel Harris-Tavita could be too similar to the new/old recruit.

CHT is reportedly already seeing the writing on the wall and looking elsewhere with the Warriors also showing their lack of faith in him by signing young Cronulla half Luke Metcalf for 2023.

With reliable hooker Wayde Egan and talented fullback Reece Walsh also locked in long term, the Warriors have the makings of a top-quality spine.

They also have strength in their forwards and potent scoring in the backs.

But with the squad forced to base itself at Redcliffe after spending most of the past two seasons at Gosford, their finals chances yet again don’t pass the sniff test.

Only the brave or foolhardy would believe the Warriors are destined to make the playoffs in 2022.

CHT’s plight is emblematic of many young Warriors in recent years. Eliesa Katoa is another who has faced a similar scenario where he was viewed as a long-term solution one minute then deemed part of the problem and surplus to the NRL team’s requirements.

Katoa burst onto the scene in 2020 and looked like the ideal edge forward the Warriors had been craving since Simon Mannering’s retirement a couple of years beforehand.

However, Katoa was in and out of first grade last season and is no guarantee to be in the run-on team in round one. 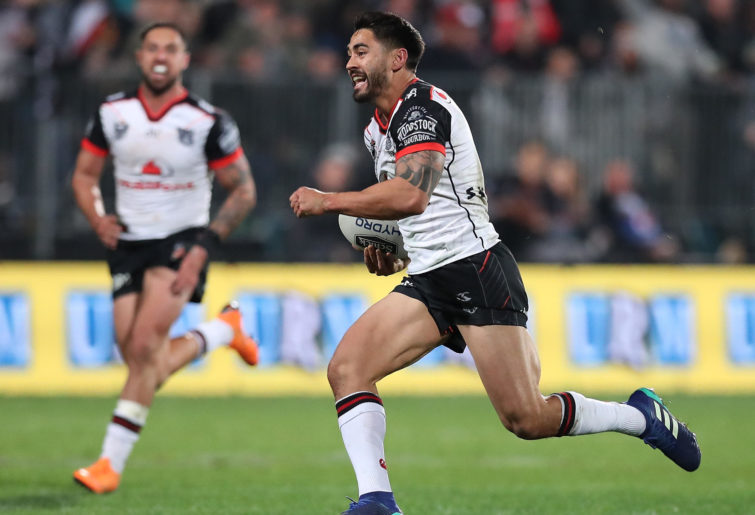 The likes of Isaiah Papali’i, Charnze Nicoll-Klokstad and Marata Niukore have also been hampered for opportunities at the Warriors and ended up leaving for greener pastures in Australia. Niukore is returning in 2023 at a much-higher price after excelling at Parramatta for the past three seasons.

For more than a quarter of a century, there has been an expectation that the Warriors are the sleeping giants of the premiership.

They get plenty of sympathy for their plight over the past couple of seasons being forced to play away from home but it’s about time the sleeping giants rouse from their slumber and live up to their potential otherwise it will become a full-blown hibernation.

Brown has a mammoth task in front of him to get the Warriors back in playoff contention – after his stints at the Dragons and the Knights ended short of expectations, coaches very rarely get another chance if they have three underwhelming entries on their resume.

Shaun Johnson is hardly a new face at the club but his return after three years at Cronulla could give them the attacking spark they’ll need to replace Roger Tuivasa-Sheck now that he’s trying his hand at rugby.

Josh Curran played one game for the Roosters in 2019, then two for the Warriors after switching mid-season and three the following year. Last season he broke the sequence with an eye-catching 14-game stint in which the second-rower regularly got through a mountain of work in defence but also created plenty of opportunities in attack.

As has historically been the case with this club, the coach can never be certain of seeing out their contract. Nathan Brown is in season two of a three-year deal and after an underwhelming first campaign under his guidance, anything short of a finals berth will turn up the heat on his future.

Their roster construction over the past couple of years has been strong with Addin Fonua-Blake and Reece Walsh coming on board while Shaun Johnson’s recent return gives them more attacking flair. Roger Tuivasa-Sheck’s switch to rugby is a body blow but the Warriors have genuine depth in all positions and could threaten for the top six ballpark if they click in 2022.

They’re facing a third straight season playing away from home, basing themselves at Redcliffe and crossing their fingers they’ll be able to play some games in New Zealand. The fatigue of their unique circumstances could be a factor and despite showing plenty of resilience over the past two years, the Warriors still haven’t been able to crack the finals and could again finish in purgatory of the 10th to 14th range. Or worse.