DAY 1 REPORT: Australia on back foot as England make hay while sun shines

Australia’s march towards a 5-0 Ashes whitewash has faced its first hurdle with two factors finally coming into play – rain and England showing some backbone.

Only 46.5 overs were able to be bowled at a rain-swept SCG in the fourth Test on Wednesday and the match is delicately poised at 3-126 after Stuart Broad, James Anderson and Mark Wood gave England arguably their best day of the hitherto lopsided series.

The Aussies will resume on day two looking to build a formidable total in their pursuit of what would be only the fourth series whitewash in Ashes history.

Worryingly for England it would be the third series they’ve lost 5-0 this century after the Australian team led by Warwick Armstrong in 1920-21 first achieved the rare feat.

During the periods where rain did not halt proceedings on day one, Broad underlined why he has been vocal in his newspaper columns about his disappointment at being overlooked for the seam-friendly wickets in Brisbane and Melbourne.

After Pat Cummins elected to bat on a grassy wicket, Broad outshone veteran new-ball comrade Anderson and speedster Mark Wood to be the pick of England’s bowlers in the truncated morning and afternoon sessions.

Broad continued his stranglehold over David Warner, dismissing him for 30 when he nicked a straightforward chance to Zak Crawley at second slip.

It was the 13th time in Test cricket that the 35-year-old Englishman has dismissed the Australian left-hander of the same age.

Unlike Anderson who was deemed not physically ready by the English camp for the series opener, Broad was fit and available for the first Test at the Gabba but was inexplicably omitted from the team with Ollie Robinson and Chris Woakes preferred.

Mark Wood gets the world's No.1 Test batter for the second match in a row – and England are right in this contest! #Ashes pic.twitter.com/4iJIctgEeH

He only took two wickets in the day-nighter in Adelaide and was again dumped for the third Test at the MCG which also would have suited him as it offered plenty of movement for the seamers.

Warner would have been more furious with his dismissal to Broad than usual – play was stopped in the following over with Australia 1-56 when another shower descended upon the Harbour City with Marnus Labuschagne not even facing a ball in his first very brief foray in the middle.

The scheduled start had been delayed half an hour due to morning drizzle, then after two rain breaks, play was a few minutes away from resuming at 4pm following what would have been the originally planned tea break when the heavens opened again.

Harris and Labuschagne finally renewed hostilities with the English bowlers 20 minutes later and settled into a groove despite the stop-start nature of the proceedings.

Anderson made the breakthrough after a 60-run stand when he found the edge from Harris and Joe Root gobbled up the catch at first slip to end the Victorian’s 109-ball effort on 38.

After his career-high 76 in the Boxing Day Test, it looked like Harris had turned the corner but he has now gone 25 innings in Test cricket without hitting a hundred – he’s a long way from the record by a specialist batter before reaching triple figures. Former Zimbabwean skipper Alistair Campbell took 83 trips to the crease before his maiden ton against India in 2000. 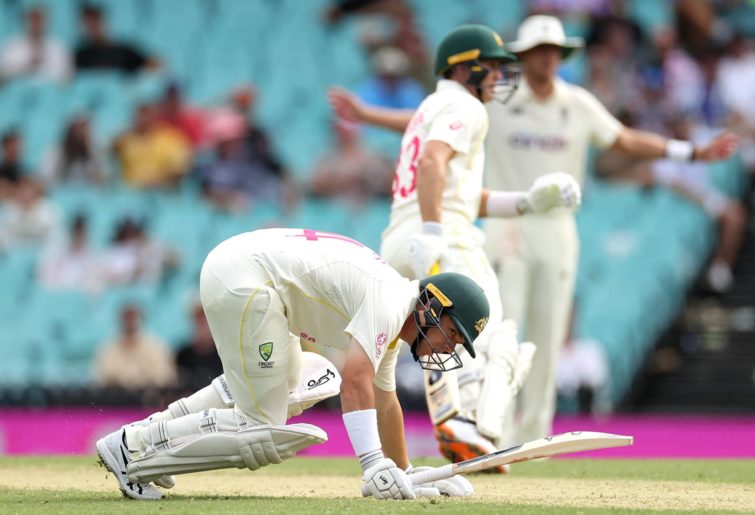 Marcus Harris of Australia reacts after avoiding being run out after slipping over during day one of the Fourth Test Match in the Ashes series between Australia and England at Sydney Cricket Ground on January 05, 2022 in Sydney, Australia. (Photo by Cameron Spencer/Getty Images)

Jason Gillespie holds the Australian record for all men’s Test cricketers with 92 before his memorable 201 not out as a nightwatcher in Bangladesh in 2006 while Harris is still well adrift of specialist batters Bob Simpson (51), Ian Redpath (48) and Steve Waugh (41) who went much lengthier stretches before becoming centurions.

Labuschagne also nicked off just when it looked like he was constructing a big innings, with Wood extracting the faintest nick through to keeper Jos Buttler with the world’s top-ranked batter on 28.

Steve Smith (six) and Khawaja (four) sprinted from the wicket when rain finally brought a halt to the opening day just before 6.30pm and Australia’s chances of a big first innings will depend greatly on their efforts with England looking to get a crack at all-rounder Cameron Green, keeper Alex Carey and the tail early on day two.