Carl Hayman: Violent past and frightening future of a scrummaging machine

Carl Hayman rounds out my favourite All Blacks with his confirmation as tighthead prop.

He lines up in the front row with Sean Fitzpatrick and Steve McDowall, a powerful scrummaging collection. Hayman was known for his scrummaging, but he was excellent at lifting in the lineout, running with the ball and adding his bulk to mauls.

Scrum experts compare him to legendary All Black Ken Gray, who had a reputation for sorting out Springboks.

As with all sports it is difficult to compare players from different eras, but those who lived through both periods of All Black history would have ample proof to have an opinion. Hayman was considered too tall to be a good prop by critics, he stood at 1.93m or 6 foot four inches and weighed 120 kg.

The “experts” thought he was too long in the back, but he appeared to cope satisfactorily, and at his peak was judged the best tighthead prop in the world.

It does not always pay to listen to experts! Just ask the great NFL player Tom Brady, who many thought had only average skills. He did all right too! Along with the exceptional Tony Woodcock and almost legendary hookers in Anton Oliver and Keven Mealamu, Hayman was in a front row that was the foundation for All Black dominance.

Between 2004 and 2007 Carl Hayman was the cornerstone of the All Black pack. 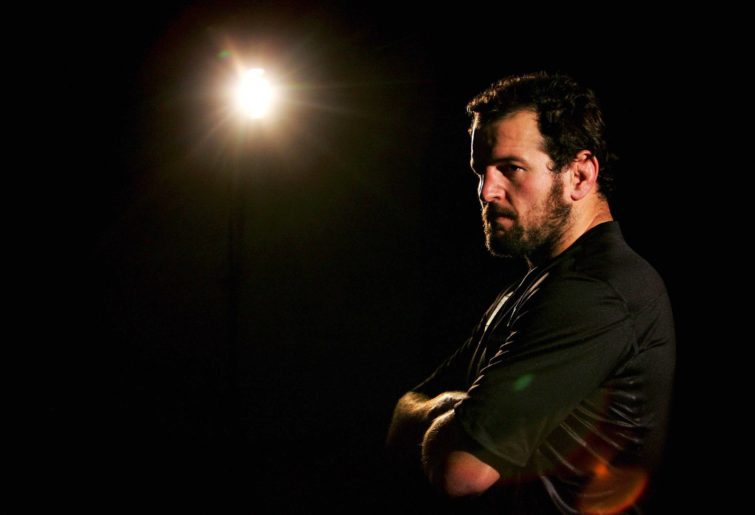 Carl Joseph Hayman was born in November 1979 in the small Taranaki town of Opunake.

He moved to Otago with his family and his potential was noted at Dunedin’s King’s High School, from where he made national schools teams. He went on to play for the New Zealand Under 21 side and the NZ A tour of Europe in 2000. Carl was selected for Otago in 1998 after shining for the Southern Club and gained Highlanders selection in 1999.

As with many new provincial players he had to bide his time behind established players, in this case Kees Meeuws and Carl Hoeft.

At the youthful age, for a prop anyway, of 21 years he became the 1000th All Black in his selection against Samoa in 2001. Hayman went on to play 45 Tests for the All Blacks. It was not until 2004 that he established himself as the leading tighthead prop under coach Graham Henry who had replaced John Mitchell.

As with Christian Cullen, Hayman had enough Maori heritage to also be selected for the New Zealand Maori, playing ten matches for them, including the famous win against the British and Irish Lions in 2005. He was awarded the “Maori Player of the Year” in 2004.

Carl Hayman played his last test at the youthful age of 27 against France in the 2007 Rugby World Cup. He was not showing his usual dominance in 2007 however. After the early exit from the tournament by the All Blacks, a number of players announced they were moving on to overseas clubs. They lost Aaron Mauger, Byron Kelleher, Chris Jack, Rico Gear, Luke McAlister, Anton Oliver and of course Carl Hayman. It is a contentious argument whether overseas All Blacks should be eligible to play for the All Blacks.

They have a strict policy of you must be playing in New Zealand to be eligible. It is easy to see both sides of the argument. But for a home grown player their first ambition should lie with making the All Blacks. Their bargaining power will be much greater when they are coming to a career end, having established a reputation as an All Black.

It is tempting to imagine though, overseas players being eligible for the All Blacks.

The competition for spots would be intense. Depth of talent would be incredible. The reality is however that say three hookers competing for a team, one misses out, what is he going to do? Stick around playing Super 12 or provincial rugby or ply his trade overseas? The big money available overseas has created this situation with New Zealand unable to compete. It would be an interesting study to see how many players who move overseas are successful in that venture and whether they were content with their decision?

Anyway, back to Carl Hayman who signed a three-year deal with the Newcastle Falcons in 2007 after being the target of most European clubs.

“We’ve been looking at a lot of tight forwards around the globe this season, but Carl is undoubtedly the best tight head prop in the world so we’re delighted to have finally signed him,” said Coach Peter Walton.

In 2010 Hayman announced he was joining Jonny Wilkinson and Joe Van Niekerk in signing for French club Toulon. This decision made him ineligible for the 2011 Rugby World Cup in New Zealand. Hayman starred in Toulon’s win in the 2013 Heineken Cup Final. After Toulon, Hayman was assistant coach for the Pau rugby team but was dismissed after an alleged altercation with some players.

In Pau he was also handed a four month suspended prison sentence for domestic violence.
He faced several counts of violence against his wife between 2016 and 2018 including “a powerful slap” necessitating three days off work.

As well as physical violence Hayman was charged with psychological damage, nuisance calls and insults.
He admitted to alcohol problems.

“It’s inexcusable. I had a problem with alcohol at the end of my professional playing career,” Hayman said.

After suffering from constant headaches as his career was winding down, he received a devastating diagnosis detailing early-onset dementia and probable chronic traumatic encephalopathy, or CTE.

“I spent several years thinking I was going crazy. At one stage that is genuinely what I thought. It was the constant headaches and all these things going on that I couldn’t understand,” Hayman says, as revealed to Dylan Cleaver’s The Bounce.

This diagnosis at the early age of forty-one has led Hayman and 150 professional players including Steve Thompson, Alix Popham and Michael Lipman to join a lawsuit on their behalf.

“The landmark suit claims rugby’s governing bodies, including World Rugby, failed to protect players from the risks caused by concussions and sub-concussions, despite being armed with the knowledge and evidence to do so,” said Cleaver.

After more than four hundred first-class games and an estimated 100,000 knocks, Hayman wants to pass on to younger players what he has learnt during this post playing time.

“Across the sporting world, you have retired athletes with serious brain damage left to contemplate an uncertain retirement undiagnosed with little support. The sports can celebrate the core physicality of game day but do much more around that to look after those participating,” said Richard Boardman representing Rylands Law.

Hayman’s main recommendation for a solution is for there to be a shorter season with better player management.

For Toulon Hayman played an unbelievable 156 games in five years.

“In hindsight, as much as I enjoyed it at the time, I don’t think doing that week after week for 10 months of the year did much good for me. At the time I felt indestructible. I never got injured, I trained bloody hard. I literally felt that I was indestructible, but if I knew then what I know now, I don’t think I would have played post the [2007] World Cup. I think I would have stopped playing,” Hayman told Dylan Cleaver.

There are few players who have led almost perfect rugby careers, Sean Fitzpatrick and Richie McCaw are two who spring to mind. They both had stellar careers and have transitioned to other opportunities in life. There are many however whose careers are beset by injuries, personal crises, illegal behaviour and non-selection. Carl Hayman did not have a perfect career and is now battling the effects of what hundreds of first class games can have on a player. Concussions and the associated effects are now in the spotlight more than ever.

Will the clubs and national teams take heed, shorten the rugby season, and seek other solutions for a difficult problem? I am appalled at the “clean outs” in modern rugby which leave a vulnerable player exposed. Both the size and hits from players are growing with anecdotal evidence of parents seeking less violent games for their children. Is weight restricted rugby still a thing? I hope so.

Do I write off the career of Carl Hayman because he received a suspended prison sentence? Should a career be dismissed because of a human failing? Is it the price they should pay?

Hayman as a rugby player was a valuable player who was dominant in his position and established a peerless reputation. A front row of Hayman, Fitzpatrick and McDowall at their peak would have been unmatched.