On a fractious day in a run of months where the country has squabbled with itself to the point of despair, Usman Khawaja produced something unexpected and sublime and then spoke proudly of living ‘the Australian dream’.

While the detaining of Serbian tennis player Novak Djokovic, and his ongoing court proceedings, dominated debate throughout Thursday, and COVID cases soared in the eastern states, those able to cast their gaze towards the SCG found perfect distraction in Khawaja’s day one century of the fourth Test.

Born in Pakistan and raised in Parramatta where his parents remain, Brisbane-based Khawaja celebrated his hundred with the trademark ‘Silencer’ move from American basketball superstar LeBron James.

Khawaja, who has outlined his battles against racism growing up, received an extraordinary reception.

“It was probably the most touching, humbling, amazing feeling out there today getting that 100 and the roar that went up,” Khawaja said.

“They were chanting Ussie as I was coming off. So to have that. It was unbelievable.

“I joke around with the boys about my past and where I’ve come from. We talk about the American dream and I call it the Australian dream.

“I joke about it, but I’m quite serious. I’m living the Australian dream.

“And I’m representing Australia in our national sport, something that I absolutely love doing. I’ve gone through a lot of hard times, broken down a lot of barriers to get to where I am right now, and I think at some level people can relate to that and they can see it.

“And I love them for it and the love I’ve gotten out here today is something special and something I’ll never forget.”

Khawaja had made peace with the fact that his Test career might have been over at 35. He hasn’t played in a month, and only a COVID positive for Travis Head – who he expects to slot straight back in Hobart – gave him the opportunity.

He was dropped in his 20s by Joe Root but, as Stuart Broad later said, played beautifully before and after that blemish.

On 99, and seven balls before tea, his captain Pat Cummins took a single to grab the strike. The SCG rumbled with ironic booing of the skipper. “I was booing him too,” Khawaja said. “I told him you’re killing me.”

But Cummins worked a one and then Khawaja did too, pulling out the LeBron inspired celebration.

“I was just excited. I was so pumped. Hundreds don’t come very often. A lot of hard work goes into them I got taken away by the moment,” said Khawaja. 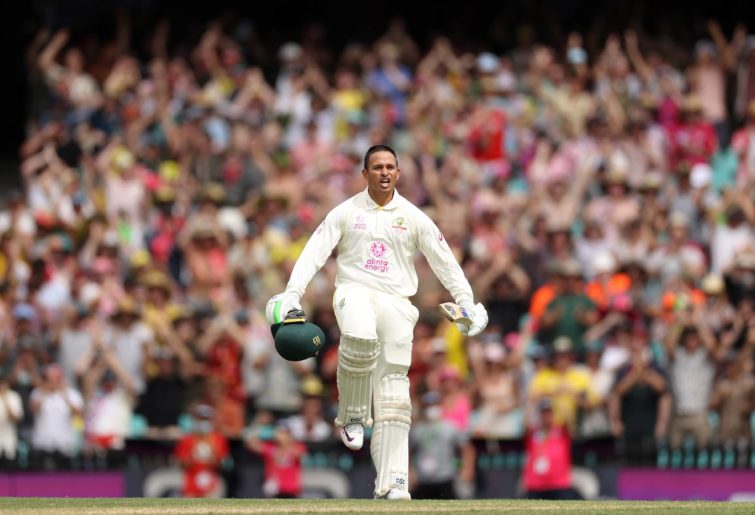 He said the celebration wasn’t premeditated – nor particularly foreign to him.

“I muck around with the boys and do it when I’m shooting hoops or just if I win at table tennis or pool or anything stupid. I just brought it to Test cricket – why not?

“I just love him. I loved Michael Jordan growing up. I love basketball. LeBron’s always been someone I’ve always loved and looked up to so no other reason than I just love watching him play.”

Australia’s next mission is a series in Pakistan in March. He said it would be special if he got picked to play in the country of his birth for a first time.

First though, he expects to be back in support crew, where he’s been a valuable contributor throughout the campaign – notably racing onto the field to celebrate with Shield teammate Michael Neser when he grabbed his first wicket in Adelaide.

This team has a squad first mentality and Khawaja is happy with his place.

“Heady is going to be back next game,” he said. “I understand the process. I’m not against that process either. So we’re winning, we’re playing really well.

“I just wanted to try to contribute. I wasn’t thinking 100 I was just see if e can contribute to win here. That’s why you’re back in the team and hopefully I have contributed to a win coming up.”