One positive is the arrival of Hugh Greenwood from the Gold Coast Suns, which may help Jy Simpkin and company out in the midfield.

I’m running my eye over four key players for the Kangaroos, who will have a major say in whether they can make a surprise run up the ladder this season. Succeed, and North could well be heading in just that direction; fail, and a second straight wooden spoon isn’t out of the question.

Young gun Simpkin was a deserved winner of the North Melbourne best and fairest in season 2021. He appears to have settled in to being a pivotal part of the Kangaroos’ midfield, which should continue on from where he left off and see him once again be a valuable player for North Melbourne in season 2022.

His durability will be a factor, as he featured in all 22 games in season 2021. He averaged the second most disposals of any North Melbourne player with an average of 26.91 disposals per game, and was also ranked second at the club for average contested possessions, with 10.68. The stats don’t lie: ball magnet Simpkin is a long-term replacement for the still excellent Ben Cunnington as the Roos’ inside grunt man and premier ball-winner. He might already be the latter.

Moving to a new role at half-back under new coach David Noble, Aaron Hall finished fourth in the best and fairest, despite missing two games and playing one other as a hardly-used medical sub. Despite this, he averaged the most disposals of any North Melbourne player with 27.90 – ranked 17th in the AFL – as the Roos looked to use his penetrating right boot as much as possible. He also averaged the most metres gained of any player in the AFL – a whopping 637.35 metres!

He played his role as an attacking half-back flanker extremely well, and along with Jack Ziebell, will need another successful year for the Roos to remain a strong rebounding team out of the backline.

Todd Goldstein may be nearing the end of his AFL career, but the veteran ruckman still has improvement left in him, as GWS big man Shane Mumford showed in 2021. 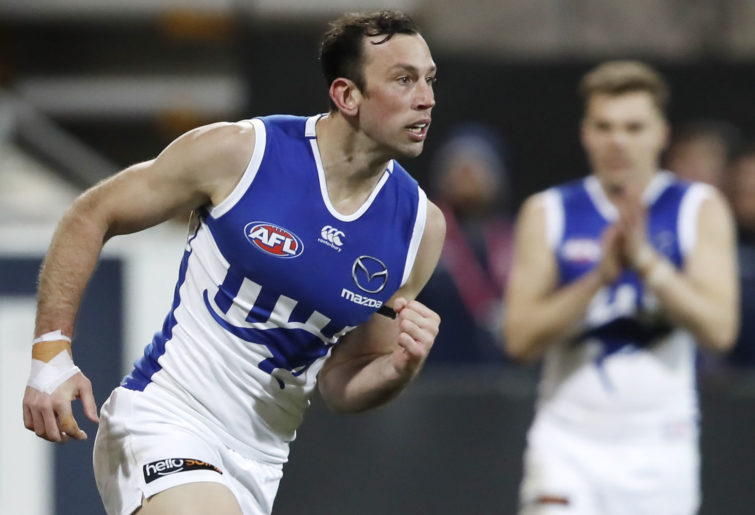 The role that Mumford played at the Giants was profound, regularly allowing his midfielders first use; the leadership that came with that was just as important. It may sound harsh on Goldstein, but he should have finished in the top ten of North Melbourne’s best and fairest in 2021, having featured in all 22 games for the season.

With youngsters Tristan Xerri, former Tiger Callum Coleman-Jones and mid-season draft recruit Jacob Edwards all largely untested as number one ruckmen, Goldstein might even have to improve on 2021 this season for the Kangaroos to make much headway up the ladder.

Then there’s Nick Larkey, who has the potential to be one of the elite forwards in the AFL.

While he managed an impressive 42 goals in 2021 as a 23-year old, he was held to one or zero goals in nine games, which is too many for a team’s spearhead.

Given he featured in all 22 games that North Melbourne played in, to finish tenth in their best and fairest is unacceptable for a player of his talent.

There’s no doubt that there’s plenty of hype around him, but he appears to have his feet on the ground. If he can perform to the level that he is capable of, as he showed with his seven-goal haul against Carlton and star key defender Jacob Weitering, then he could well finish near the top of the Coleman Medal charts in 2022. 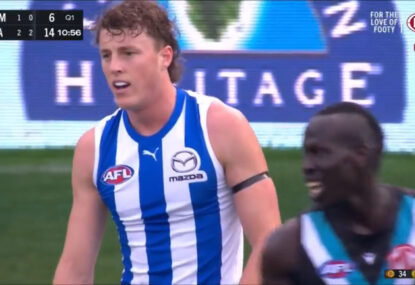 No room for David Noble’s spray in modern AFL

Everybody knew that the rebuild at North Melbourne was going to be a tough road to hoe, and potentially an exhausting one for the…

No room for David Noble’s spray in modern AFL

'Harden up!' Mark Robinson's message to Roos after coach apologised for spraying them

While some players reportedly took the Round 3, post-match spray personally, captain Jack Ziebell had his coach David Noble's back, stating that it showed… 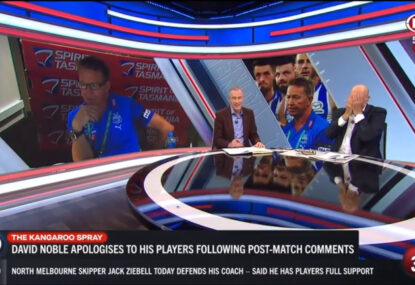 'Harden up!' Mark Robinson's message to Roos after coach apologised for spraying them

BRETT GEEVES: Noble pursuit? Why North's flirtation with a priority pick is anything but

BRETT GEEVES: Noble pursuit? Why North's flirtation with a priority pick is anything but