UPDATE: Serbian president vows to 'fight for Novak' as ScoMo weighs in on Djokovic deportation

Nine-time Australian Open champion Novak Djokovic is set to be deported after his visa was revoked by the Australian government. The world No.1 is expected to file an injunction to stop the deportation.

Health Minister Greg Hunt confirmed on Thursday that Djokovic would have to leave the country following the cancellation of his visa.

“The advice I have is that the ABF (Australian Border Force) can confirm that Mr Djokovic failed to provide appropriate evidence to meet the entry requirements to Australia and his visa has been subsequently cancelled,” Hunt told Channel 7.

“It’s a matter for him whether he wishes to appeal that but if a visa is cancelled, somebody will have to leave the country

“That follows a review of the exemption which was provided through Victorian government processes.”

It is believed that Djokovic will be transferred to a city hotel until the injunction is heard or a flight out of the country is arranged.

“Rules are rules, especially when it comes to our borders. No one is above these rules,” Morrison tweeted on Thursday morning.

But the move by the Australian government threatened to cause a diplomatic incident between Canberra and Belgrade.

“I told our Novak that the whole of Serbia is with him and that our bodies are doing everything to see that the harassment of the world’s best tennis player is brought to an end immediately.

“In line with all norms of international law, Serbia will fight for Novak, truth and justice.” 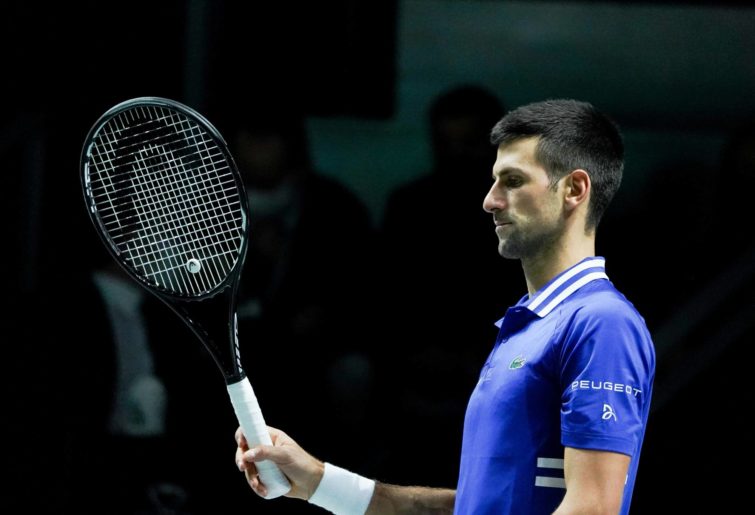 Djokovic had a vaccination exemption from that allowed him to compete in Melbourne but with a visa that did not allow for medical exemptions.

However it’s reported that the visa Djokovic was using was the same as three other international tennis players with similar exemptions who had already entered the country without incident.

The Victorian government said it was a matter for federal authorities.

Djokovic was left stranded overnight in a police-guarded room at Melbourne airport amid the visa mix-up.

The extraordinary, escalating soap opera surrounding the world’s best men’s player continued on Wednesday night when he flew straight into a political storm and a visa controversy on arrival into Tullamarine Airport after a 14-hour flight from Dubai.

The Age newspaper reported on Thursday morning that Djokovic’s visa has been rejected, and he has been told to leave the country.

“Djokovic’s lawyers are in the process of challenging the decision, two sources familiar with the situation confirmed to The Age,” the paper reported.

The earlier detainment left his father Srdjan telling the Serbian B92 internet portal: “Novak is currently in a room which no one can enter. In front of the room are two policemen.”

Srdjan also reportedly told Serbian media: “I have no idea what’s going on, they are holding my son captive for five hours.

Djokovic was still awaiting permission to enter the country with his team reportedly having applied for a visa that does not allow for medical exemptions.

The 34-year-old, never a stranger to controversy, has found himself the subject of a major public backlash in Australia after revealing on Tuesday that he’d received the vaccination exemption which allowed him to bid for a record 21st major title.

But amid the storm, tournament director Craig Tiley insisted the world No.1 was getting no special treatment and Prime Minister Scott Morrison said the player “would be on the next plane home” if he could not provide the proper evidence for his exemption.

But Djokovic was embroiled in entry problems as Victoria’s Sports Minister Jaala Pulford confirmed the state government did not support his visa application, effectively putting his fate in the hands of federal government.

The Age newspaper said the federal Border Force had contacted the Victoria state government asking if it would support his application after his team applied for the wrong kind of visa.

Pulford said in a tweet: “The Federal Government has asked if we will support Novak Djokovic’s visa application to enter Australia.

“We will not be providing Novak Djokovic with individual visa application support to participate in the 2022 Australian Open Grand Slam.”

It was not clear whether the federal government would allow his entry and the Border Force could not be reached for comment.

As Djokovic was left in isolation to ponder this astonishing start to his trip, there were also growing demands for him to clear up any doubts over the reasons for why he’d been given the exemption.

Toni Nadal, the uncle and long-time former coach of Djokovic’s great rival Rafael Nadal, urged him to clarify the situation.

Writing in his newspaper column in El Pais, Nadal said: “There are almost six million people who have lost their lives due to this damn virus and many other millions who have received the vaccine.

“I want to think that Novak is no stranger to all this and that he will clear up the doubts as a sign of human sensitivity and understanding.”

Even the great Rod Laver, fearing that Djokovic’s participation on the court named after him at Melbourne Park could see passions running high, wants him the Serb to open up.

“I think it might get ugly. I’d think the Victorian people would be thinking, ‘Yes I’d love to see him play and compete but at the same time, there’s a right way and a wrong way’.

“If he’s got a reason for (the exemption) then … we should know it.”

Australia’s world No.1 Ash Barty said: “I think it’s a tough one. As we’ve seen a little bit in the last day or so, from the Australian public, I know how hard it has been for Australians… but in particular Victorians have had a real rough trot over the last 18 months and two years.

“I understand why they may be frustrated with the decision. Ultimately, I have no interest in speaking about Novak’s medical history. It’s not my decision. Those decisions are made. They’re completely out of my control.”