The sight of Stuart Broad – the ‘ninja of Nottingham’ – tormenting his usual foe David Warner rekindled the painful debate, the English press lamented, as England held their ground in the opening salvos of the fourth Sydney Ashes Test.

There hasn’t been much to cheer for England supporters as Joe Root’s team has surrendered the Ashes within 12 days, but Broad and Mark Wood were lauded for their performances by the travelling media contingent as they kept the rampant Aussies on a tight leash.

“For Broad it is Warner, whose pugnacity dissolves whenever he sees his 6ft 6in nemesis, decked out in white headband like the ninja of Nottingham, haring towards him from around the wicket,” waxed The Telegraph’s Oliver Brown.

“His 13th dismissal at Broad’s hands unfolded in near-perfect symmetry with the dozen before, as he prodded nervously at a ball fired in from wide on the crease, one that nipped back to take his outside edge and fall obligingly to Zak Crawley at second slip.

“Broad, for his part, wanted to milk the moment, toasting Warner’s exit by making a bunny-ears gesture to Crawley.

“Unfortunately, in the wider context of England’s Ashes surrender, it was hardly a cause for mirth.

“The sight of Broad tormenting his usual foe, who just happens to be one of the world’s most dangerous opening batsmen, rekindled the painful debate as to why he had not led his team’s pace attack from the outset. ‘Stuart Broad, where were you in Brisbane?’ lamented Michael Vaughan.”

Simon Wilde, in The Times, carried on the theme: ”Stuart Broad reasserted his hold over David Warner as well as his place in the England XI by having the Australia opener caught in the slips for 30 in now-familiar fashion, driving at a delivery angled in from round the wicket.

“Broad was returning to the England side for only his second match of the series after sitting out the Brisbane and Melbourne games — much to his frustration — and he was clearly keen to make an impact.

“Graham Thorpe, England’s acting head coach, likened him on the eve-of-game to a caged tiger, and as the day went on he certainly found his teeth.” 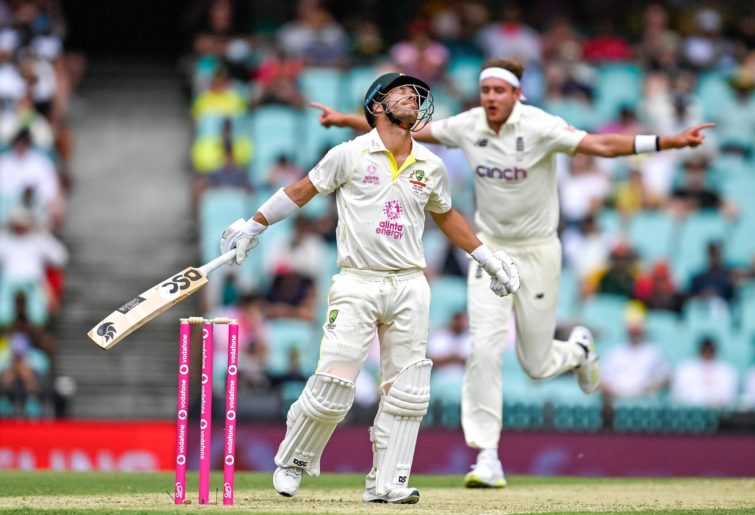 David Warner of Australia looks dejected after being dismissed by Stuart Broad of England during day one of the Fourth Test match in the Ashes series between Australia and England at Sydney Cricket Ground on January 05, 2022 in Sydney, Australia. (Editorial use only)

The Sun’s John Etheridge joined in on the Broad appreciation society: “Stuart Broad briefly took himself and England back to happier times when he dismissed David Warner in Test cricket for the 13th time.

“Broad had Warner caught in the slips for 30 and, just for a moment, we could have been transported to 2019 when he inflicted all manner of anxiety on the Aussie opener.

“It was a fleeting moment of joy for England amid the wreckage of recent weeks and this is a dead-rubber match, of course.”

Mark Wood always got in his share of the opening day credits with his crucial wicket of Australia’s gun No.3 Marnus Labuschagne late in the rain-hit day.
Former England captain Nasser Hussain, writing in the Daily Mail, said Wood’s extra zip ruffles up the best players.

“Mark Wood has that knack of getting good players out and he was impressive again on day one in dismissing Marnus Labuschagne for the second successive time in this Ashes,” Hussain opined.

“Wood just has that extra zip to ruffle up the best players, as he has shown in providing problems for Labuschagne and Steve Smith in this series, and the way he has kept going in Australia has been a massive plus for England.

“He has the misfortune of invariably being brought in on the flattest pitches when that something extra is needed.

“That’s when you need the pace and X-factor Wood provides which is why it was so surprising he didn’t play at Adelaide on the flattest pitch of this series.

“Stuart Broad, too, showed why he could easily have been playing throughout this Ashes by going round the wicket and getting David Warner out in familiar fashion for the 13th time in Test cricket.

“I said before the series, looking from afar, that there was a case to rotate Broad and Anderson in this Ashes but Warner, for one, will be delighted he had only played in Adelaide up to now. Especially when you consider how the pitch and conditions were in Brisbane.”

“Wood is the kind of cricketer Richie Benaud would have endorsed, enjoying as he did players who connected with the general public. There was a reminder of Benaud the day before the Sydney Test began when the media centre was named for him.

“Wood has only netted six wickets in this series, but three of them have been big fish — Labuschagne twice, and Steve Smith once.

“England have certainly benefited from Wood’s wholehearted endeavour. Oh, that the team could tap into more of his spirit.”

The Telegraph’s Nick Hoult highlighted Wood’s knack of blasting out important wickets for his team.

“Mark Wood will admit himself he does not take as many wickets as a bowler with his pace should but he has developed a happy knack of knocking over the world’s no 1 ranked batsman.

“Marnus Labuschagne elbowed Joe Root off the top of the ICC rankings after the Adelaide Test.

“It marked a meteoric rise for Labuschagne, but since then he has faced 11 balls from Wood and been dismissed twice, a fact that highlights the mistake of England not picking their fastest bowler in Adelaide where his extra pace may have made a difference when the series could still have been a contest.”

The Guardian’s Ali Martin noted: “13 days into an Ashes series that saw the urn settled in 12, England could finally walk off an Australian field feeling content with their lot.

“Given Joe Root’s tourists had slightly shambled into this fourth Test, ears ringing from the eruption of existential angst that followed their 68 all out in Melbourne, and their preparations affected by an outbreak of Covid-19 among the coaching staff, a mini-fightback of two wickets in the space of seven balls represented a boon.”