Folau fires in flying start to rugby return in Japan

The Roar
8th January, 2022
173
Join the conversation
13193 Reads
Advertisement
Write for The Roar

Israel Folau has dominated in his first game in his return to rugby in Japan’s League One, scoring two tries in Shining Arcs Tokyo-Bay Urayasu’s thrilling 24-23 win over Kobelco Kobe Steelers.

In the opening match of the season, Folau, whose Wallabies career was infamously terminated in 2019 for homophobic views, was in vintage touch at fullback, in his first professional rugby union match in over 1000 days.

The 32-year old, who is hoping to return to international rugby for Tonga after World Rugby changed their eligibility laws in late 2021, took less than 15 minutes to announce his arrival in Japan, storming through opponents Kobe Steelers for Arcs’ first try of the match.

He would then prove the match-winner in the 76th minute, scoring a trademark scoring after a trademark leap over two opponents to give Arcs the lead.

Between the tries, Folau’s running game was as impressive as ever, leading commentator and former Wallaby Drew Mitchell to note: “It must be said, Israel Folau, looking pretty impressive in his first game back in a number of years.”

Israel Folau has his first carry of the #LeagueOne season. pic.twitter.com/459TAWwprD

Since departing the Wallabies, Folau had made a return to rugby league, featuring for Catalans Dragons in the English Super League as well as Clive Palmer’s Southport Tigers in the Queensland Cup.

Folau’s efforts saw Arcs take a 24-17 lead late, only for the Steelers to threaten to win the match after a last-gasp try from scrum half Daiki Nakajima.

However, fly-half and former All Black Aaron Cruden would miss the conversion, allowing Folau to start a winner. 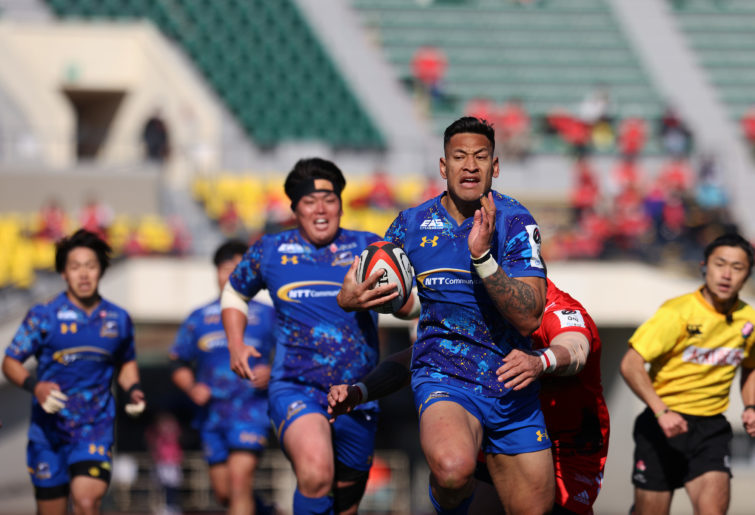 Israel Folau runs during his first game in Japan’s League One. (Photo by Buddhika Weerasinghe/Getty Images)

Folau’s return has already impressed his Arcs teammates, with fellow former Wallaby Liam Gill claiming he will soon be ‘considered one of the best in the world again’.

“Izzy has just picked up where he left off,” Gill told Fox Sports.

“He hasn’t really left anything behind in his time off.”

Folau’s contract, reportedly worth $500,000, carries with it a clause that he will not post religious messages on his social media account.