The ‘GOAT debate’ – the title of greatest of all time in tennis – could not have been scripted any better.

As the big three – Rafael Nadal, Roger Federer and Novak Djokovic – now remain on a three way grand slam deadlock of 20 majors, history awaits, but for only one of these men.

Djokovic, as per local media sources, had had his visa re-instated by the Federal Court of Australia, regarding his medical exemption to enter Australia, and play the Australian Open.

For those unaware of just how juicy this grand slam race has become- let’s take into account some interesting coincidences.

1. A once in a lifetime global virus likely extended Roger Federer’s reign account the top of the men’s grand slam count. In January 2020, Novak had won his 17th grand slam title.

2. The irony of Bill Gates – a champion of vaccines – having a budding friendship with Roger Federer and his charitable work in raising money for Africa, and the fact that the only thing that was standing in the way of Novak Djokovic’s ascension to the top of the all time major grand slam count, was a vaccine.

This irony is just too funny.

3. Disqualification from the 2020 US Open likely delayed Novak’s bid to overtake Federer.

4. A global pandemic limiting the number of weeks at number one Novak could accumulate. Due to the tennis tour remaining frozen from March-July 2020, Novak lost almost four months of time he could have spent holding on the the number one spot, another metric in determining the greatest male tennis player of all time.

At that point, Novak had only five majors to Federer’s 17. However over the next four years, Novak improved that to 12 majors, only five behind Roger Federer.

However, 2017 had other plans, and Novak failed to win another major for almost two years, while Federer added an additional three majors in that time to reach 20 majors.

However after a miracle run in Australia, Nadal turned back the clock like it was 2007, and made the final at the Australian Open. He then won the 2017 French Open, his first major win since the 2014 French Open, full three years prior.

7. The hurdles Novak had to overcome to close the gap: Novak Djokovic won the 2020 Australian Open despite calls for it to be cancelled due to dangerous levels of bushfire smoke and affecting visibility.

Thankfully it cleared miraculously. In 2021, due to a delta coronavirus surge in Melbourne, the Australian Open was very nearly cancelled, and was played with no fans for the entire second week.

As well, after quarantining in a hotel room for two weeks, Novak developed a 2.5 mm abdominal tear and managed to win the Australian Open despite such an extreme injury concern.

If that isn’t a strong case for craziest major race in history, I truly don’t know what is.

Australian tennis legend Pat Cash has launched a blistering attack on Nick Kyrgios, accusing him of cheating, abuse and dragging tennis down to new depths.… 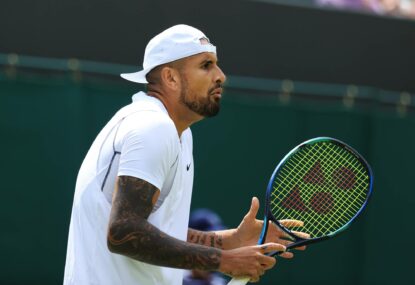 'You're a disgrace': Kyrgios demands Tsitsipas be defaulted after petulant act

Nick Kyrgios was adamant Stefanos Tsitsipas should have been defaulted from their match, after hitting a ball into the crowd that appeared to strike… 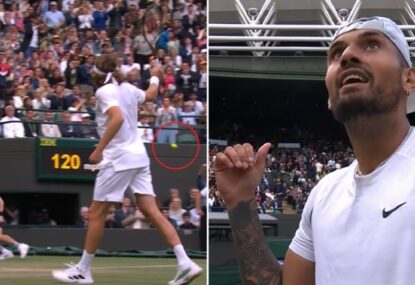 'You're a disgrace': Kyrgios demands Tsitsipas be defaulted after petulant act

How on earth did Alex de Minaur win this point?

An incredible get from the Aussie in his third-round win at Wimbledon! 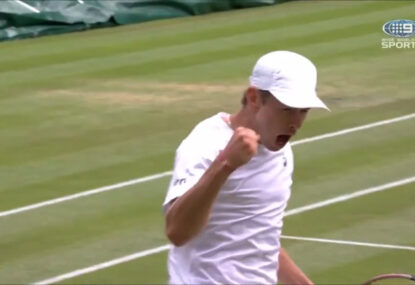 How on earth did Alex de Minaur win this point?

Stefanos Tsitsipas teed off at Nick Kyrgios after his Wimbledon defeat- and the Aussie then fired right back! 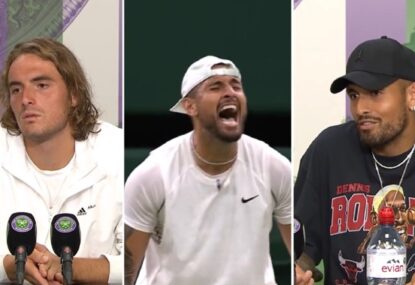