Before the new dawn: Johnny Warren, an old book and me (Part 1)

It’s 20 years since Johnny Warren, along with Andy Harper and Josh Whittington, published the story of his life in Australian football.

The book’s title is a little unfortunate considering the events of recent days, but it does reflect a not uncommon attitude toward football when the game resided on the periphery of Australia’s popular sporting consciousness.

It landed on my bookshelf just after I’d flown the family coop and moved into a grotty shared apartment at Yeronga in Brisbane’s southern suburbs.

I’d grown up in rural northern New South Wales, playing and avidly following rugby league. But watching rugby league could be tricky, with many an evening spent elaborately positioning the old rabbit-ears antenna to pick up the weak signal from Channel Nine.

It was only a matter of time before the siren song of the ABC’s English Premier League show reached me.

It was a gateway. World Football and the Serie A highlights on SBS were next. 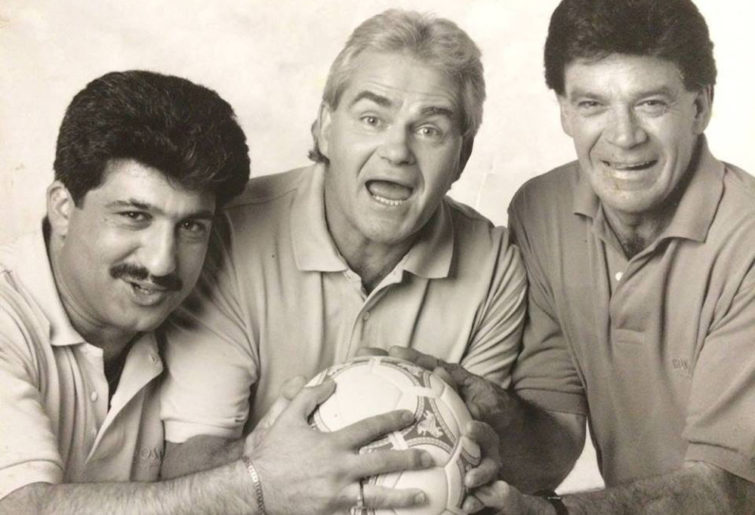 I jumped on the Brisbane Strikers bandwagon just before the club reached its zenith, the 2-0 victory over Sydney United to win the 1997 National Soccer League (NSL). I was briefly an intern with the Strikers’ front office and had some very interesting conversations with John Kosmina.

I first read Johnny Warren’s book around this time, when my football mores were largely set. It was still three years before the A-League and John Aloisi’s shirtless dash along Sydney’s Olympic Stadium.

He described the story of football in Australia as “one of struggle; an incredible, relentless, frustrating and frequently unjust struggle”.

The game’s virtues were mostly ignored, while its vices – crowd trouble and the NSL’s instability – received disproportionate attention.

To describe the history of Australian football as Warren did is not hyperbole. Nor is a complicated past unusual.

The codification of the game in England and the formation of the football association, with its myriad compromises and disputes, was certainly complicated and contested.

The establishment of Spain’s professional league on the eve of the country’s brutal, fratricidal civil war still echoes in Spanish football’s modern hierarchy.

What stands out in Australia are the wild fluctuations – from the game established by British settlers in the late 19th century and played at the elite private schools that were to become bastions of rugby union, to the game subsumed in popular conscience by the rugby codes and Australian rules.

The post-World War II boom, fuelled by migrants from southern and eastern Europe, was accompanied by a ban from international football.

The landmark qualification for the 1974 World Cup was followed by decades of frustration at international level and concurrent instability in domestic football.

Warren personified this era. He played in Australia’s first World Cup finals game in 1974, championed a doomed NSL team in Canberra and choked back tears on live television on the heartbreaking night of 29 November 1997.

There are some interesting parallels between post-war Australian football and the game’s recent history, the past repeating itself behind the game’s new corporate veneer.

Warren’s career took off in the early 1960s, first at Canterbury and then St George-Budapest.

It was the period when the post-war migration boom was starting to reshape football. Old district clubs – like Canterbury, which had grown primarily from English and Scottish roots – were being challenged by clubs formed by the new wave of migrants.

The hostility these clubs and their players faced – pithily summed up in the title of Warren’s book – was not just the prevalence of bigoted attitudes in mid-20th century Australia, but a broader sense of otherness.

The new clubs were seen as closed societies; they didn’t merely exist outside the mainstream; they were proud of it. Who can forget the 12th Man’s preposterous sketch about the Socceroos competing in a “European invitational tournament”?

The rowdy NSL patrons cursing at each other in foreign languages, setting off flares and occasionally engaging in internecine handbags seemingly occupied another world

It was nonsense, of course. Australians from British and Irish backgrounds, like Warren, were most welcome. So was the great Charlie Perkins.

The main reason why the breakaway Australian Soccer Federation had such difficulty with FIFA was the predilection of its clubs for signing footballers from all over Europe and South America, outside official channels.

The A-League was, and is, an attempt to neutralise this perception of otherness; to exist outside a supposed niche and as part of the mainstream. But it could never hold back the tide of history

The latest contretemps between Australia’s football administration and FIFA was primarily about a wrestle for control between a force that had wrested control of the game from another who had been the game.

There had to be a compromise. The National Second Division, if and when it’s implemented, will be strongly debated, hotly contested and almost certainly altered, frequently.

Even though I’m an old Brisbane Strikers supporter and struggle to identify with an A-League club, I don’t want to go back to the good (and bad) old days.

I doubt Johnny Warren would want that either. One of his many frustrations was that, while participation in football was always strong and despite ample coverage of football’s problems, few had any sense of ownership.

It was, as he said, often seen as “just those w*gs having another stoush”.

The two A-Leagues and national teams have changed that. Sam Kerr’s a headline act, whereas Warren, a regular contributor to commercial television and radio, was lucky to get a minute at the end of a broadcast after all the ‘big sport’ had been covered.

In part two, I’ll look at the rest of Warren’s vision for Australian football compared to where we are today.