Will winning the Ashes ever take second place for an Australian player or supporter?

Can beating England at any sport ever be an afterthought in the Australian sporting psyche?

In rugby terms, that is exactly what needs to happen in 2022. While the tour by Eddie Jones’ England team in July will undoubtedly be one peak event given a recent string of failures against the same opponents, finding a way to beat New Zealand later in the year will probably be the bigger priority for Dave Rennie.

If England are the Wallabies’ Mount Kilimanjaro, the All Blacks represent their Everest.

Australia’s closest trans-Tasman neighbours are the nation’s very own Lateral Flow Test, influencing the mood of Australian rugby in a far more direct way than England ever will.

In 2021, Australian sides emerged from an exciting domestic competition full of optimism – only to have their tails handed to them in Super Rugby Trans-Tasman. Kiwi franchises won 23 of the 25 games between the two nations. Even the champion Queensland Reds were humbled, conceding a massive 30 tries over their five matches and losing by 28 points to 63 against the Crusaders on their home patch in Brisbane.

Whatever confidence Rennie had instilled in his charges with a win and a draw against New Zealand in 2020 was washed away by three straight defeats in Bledisloe Cup matches one year later. Australia has played the Kiwis about two and a half times more than England since the turn of the millennium, so finding ways to engage teams from New Zealand on an even footing is vital.

To discover the last period of Australian success against the All Blacks, we have to wind the clock back all the way to the Rod Macqueen and Eddie Jones era of 1997-2005. Macqueen won five out of his seven encounters with New Zealand, while Eddie won five out of 11. 10 wins out of 18 attempts represents a golden era for anyone where the All Blacks are concerned. Since then, New Zealand has enjoyed ample revenge, winning over 80 per cent of the matches played between 2006 and 2021.

“Australia have a [season] and a half coming into the next World Cup and this is going to be a litmus test for them,” Macqueen pointed out back in 2010, before another crucial clash between Wallaby and Kiwi.

“So close to the World Cup it’s a great opportunity for them because they’re not guessing, they’ll know after this next game where they stand and what they have to do.”

Macqueen’s words have a deeper resonance today than even he realised at the time.

It is worth taking the journey, all the way back to 2000 and the ‘Game of the Century’ to find out what Macqueen’s Wallabies were doing so much better against the All Blacks. Although they lost one of the greatest matches in living memory in the final moments, Australia came roaring back to beat the same opponents in the return fixture in Wellington and hoist the Tri-Nations trophy.

As a preface to the action, it is worth noting how different the game was back then. For example, 11 of 12 scrums were completed with usable ball, with only one free-kick and no penalties at all. The first scrum was set in only the second minute of the match:

It is just ‘Hold’ followed by ‘Engage’ and there is no complex four-fold engagement process. The ball is rolled more or less into the centre of the tunnel and it is hooked back, and emerges at the base within four seconds.
That set the tone for the first score of the game:

Andrew Mehrtens’ kick takes an unfortunate deflection off the fingertips of Wallaby number 12 Jason Little, and ends up in the grateful hands of Tana Umaga for a runaway try.

The Wallabies gave themselves a mountain to climb thereafter, conceding another two tries in rapid-fire succession to go 21 points behind after only seven minutes of play. The economy of New Zealand’s attacking play on the counter was typical, with their first four tries of the game only costing them four phases and 10 passes in total.

Compare the Reds game versus the Crusaders in 2021, and it is all an eerily familiar story.

Queensland fell behind 21-0 after quarter of an hour, and 28-0 after 30 minutes, and the first four tries only cost the Crusaders a total of three rucks and four passes to convert.

The difference is that there was no coming back by the Reds in 2021. The Wallabies of the Macqueen and early Jones era had a remarkable mental capacity to ‘shut out the noise’ and concentrate on their own processes, which they knew would lead to success, whatever the score-line. A lot of coaches talk about that rare quality, but very few access it.

The ‘boxing’ chemistry of Australia-New Zealand contests set the stage for some classic battles. Australia liked to lead off, build phases and control possession of the ball. New Zealand were happy to give up possession and look for lethal counter-punches on the return. The Wallabies always knew they would be in with a shot because of that tactical balance.

The breakdowns of the era also had a very different complexion, which further increased Australia’s chances: 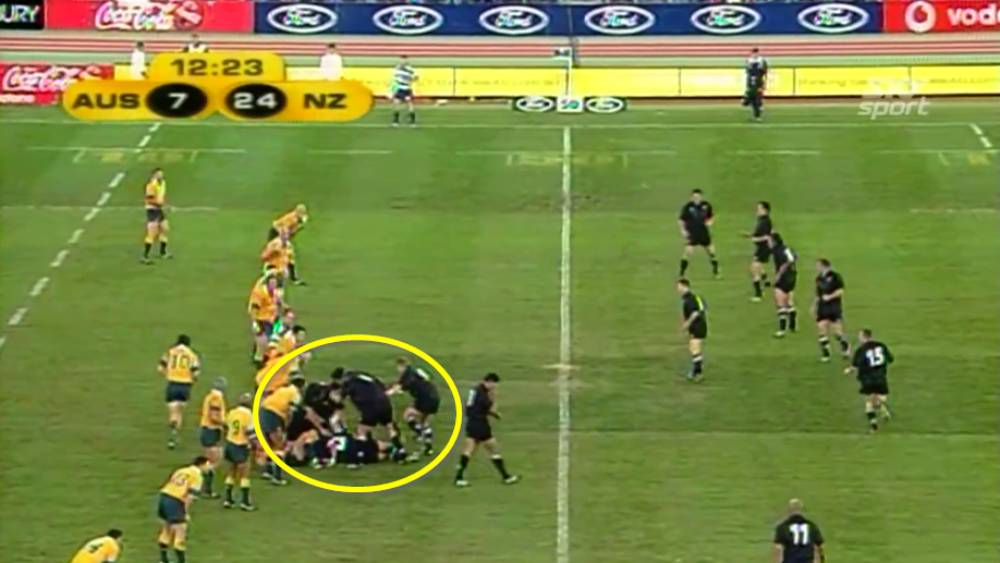 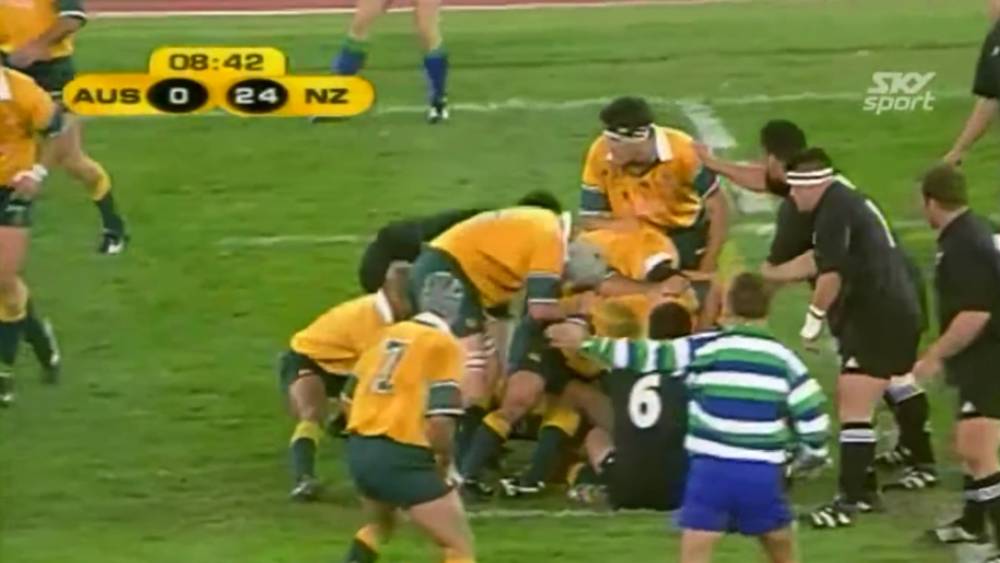 A modern breakdown will contain at most, five or six players. At the turn of the millennium, there were frequently anywhere between eight and 11. The wide snapshot shows how condensed defences could become, only able to cover the distance to the side-line by a steady lateral drift.

The second snapshot (with 11 players from both sides stuck in and around the ruck) set the scene for Australia’s first try of the game:

Stephen Larkham runs a switch with Little on the first play to check the drift. As soon as he sees Jonah Lomu positioned well inside the left 15m line, he runs to the outside to pick up Stirling Mortlock on the Wallaby right wing for the try.

The theme of big men running acute lines, with Stephen Larkham drifting in and around them as a play-making joker in the pack, was enabled by the unusual size of a back three in which Stirling Mortlock, Chris Latham and Joe Roff were all 6’3 and 95 kilos plus – and footballers to boot:

First it is Mortlock taking the hard line off Larkham, then Jim Williams from number 8 further narrowing up the defence with a pick and go. That grants Australia the ability to play out of its own end effectively, with the ‘joker’ still able to play his hand out wide on the next play.

Macqueen was a tactical trailblazer, ramping up the use of the back three on the carry off 9 or 10 directly:

First up, it is ‘big man up the middle’ off a trademark inside flip by number 9 George Gregan, with Mark Connors (in the yellow hat) powering on deep into the New Zealand 22. On second phase Larkham gives and drifts wide, with Jason Little working up the middle and Joe Roff dropping in from the left wing to support him.

It is a different version of the same formula on the next two phases leading to a Wallaby try. Larkham dumps inside to number 13 Dan Herbert, then Chris Latham jumps into first receiver late off the pass from Gregan. He runs through a gaping hole between the last Kiwi forward (Kees Meuws) and the first back (Umaga) to score: 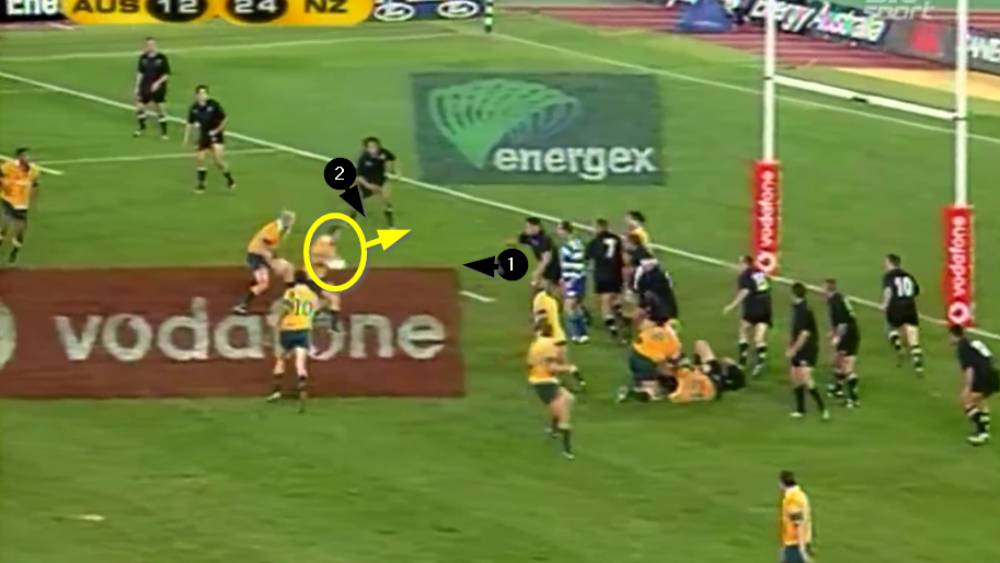 The work rate of the Wallaby back three was truly awe-inspiring, with a mighty left foot kicking game from Latham and Roff to back it all up:

All of Mortlock, Latham and Roff get in on the act in the first sequence, while Roff’s left-footed exit would be a 50/22 in the modern era, and result in an attacking lineout throw to Australia.

Summary
It may seem strange to say it, with the Wallabies having dropped their last eight games straight to England since 2016, but the priority for Australia in 2022 is to beat New Zealand. It is as simple and obvious as that.

Whether it is wins at provincial level in the newly-formed Super Rugby Pacific competition, or victories in the Bledisloe Cup later in the year, there needs to be an upsurge in confidence against the oldest of enemies, whatever the source.

The current Wallabies may not in the same class as their forebears from the Rod Macqueen era as yet, but there was an unmistakeable, growing resemblance on their five-match winning run in 2021. They had the power in the centres with Samu Kerevi and Len Ikitau, and the work rate in the back three with Marika Koroibete and Andrew Kellaway. They had the joker in the pack with Quade Cooper.

Potentially, Australia has the tools to make life uncomfortable for the All Blacks. As Ireland proved on the recent end-of-year tour, a well-constructed possession attack can starve the Kiwis of the countering ball on which they thrive. It happened 20 years ago, now it is up to Dave Rennie to rediscover the silver lining – or a steady gold glow – in rugby history.

The future is not all black, not by a long chalk.