The Roar
13th January, 2022
36
Join the conversation
6126 Reads
Advertisement
Write for The Roar

The bout – tagged the Turf War – will be held at the ICC Sydney Super Aware Theatre. It is the first foray into pay-per-view sport for Stan, with the streaming service making it available to existing Stan customers to purchase for $50.

“For the first time in my professional sporting career, I am fully concentrating on boxing,” said Williams. “I know Barry Hall is a very hard man and his debut proved he has a tonne of skill, but he is inexperienced in the ring and nowhere near my class level.

Sonny Bill Williams and Barry Hall will face off in Turf War ????

“This fight against Hall starts the last chapter of my sporting career and I will take this win and
move on to further big fights over the next 24-36 months.”

Williams announced he would prepare for the fight by training with heavyweight champion Tyson Fury.

“My focus on winning this fight begins with a phenomenal opportunity to join the world’s biggest
name in boxing, Tyson Fury, at his training camp in the United States immediately, to ensure
I am 100% prepared for this fight,” said Williams.

The announcement comes after a frustrated Paul Gallen called out SBW, who has so far resisted a bout against the former NRL star.

Gallen’s name was raised in vain by Hall, who drew his only previous pro fight with former NSW and Sharks enforcer in 2019. Hall said he expected this fight to be different, saying he had more respect for SBW than, Gallen, who he called a “wanker.”

Hall though made it clear he felt he had been messed around by Williams.

“We were wondering what was going on – I’ve been sitting here idling for two years now,” he told a news conference.

“I could have had other fights but we wanted to wait for Sonny because it’s a fight we can win, he’s the biggest name and it’s one of those things where we were willing to wait.

“Now we’re in fight mode, there’s no friends, it’s him or me. He’s going to take food off my kids plates, that’s how I’m dealing with it and it’s not going to happen.”

Hall said he should have been retired already but SBW acknowledged he had been slow to get the fight on a card.

“I was going to get into this boxing thing for two years,” said Hall. “In my first fight I really challenged myself, 10 weeks off the couch against one of rugby league’s best.”

Gallen and Hall were awarded a draw, a decision Hall clearly still disputes.

“If you follow boxing I won the fight,” Hall said. “I’m under no illusions. Sonny’s a big name, all these bright lights and people are not here for me. I need to win by knockout, I’m not going to win on points, I’ve already been there.

“I’ve won a fight and I got robbed. I need a knockout and take it out of the judges’ hands.”

He said the Gallen fight had been a “bit of a blur” and he wanted to enjoy this experience.

“It was 2 minute rounds because of a lack of preparation at that stage,” said Hall. “It went so fast. I didn’t get to sit back and enjoy it. I forget half of what happened in the fight.

“I want to take in a bit more about what it’s like in terms of getting in the ring. I wasn’t nervous. We’re going to get punched in the face, that’s what we’re in here for. You think you’re going to get in and not get hurt you’re kidding yourself.

Williams, who has an 8-0 record with three KOs, said he didn’t want to rush into fighting Hall or Gallen and wanted to build his boxing skill set first. 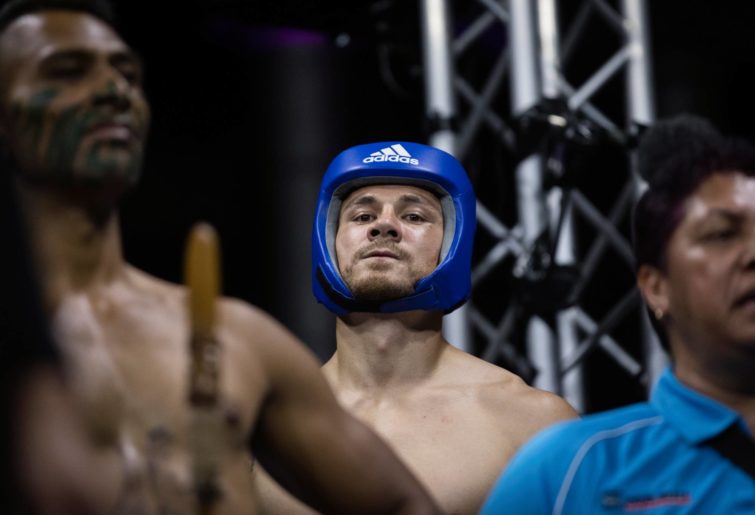 “I showed against Paul Gallen that I can go the distance and go hard,” said Hall. “Sonny is a hugely
talented individual but has not ever faced anyone of my size or skill. The lad has had everything laid on a silver platter in his boxing career to date.

“Sonny Boy has made a mistake in taking this fight, I intend to finish his boxing career and open up bigger fight opportunities for myself.” 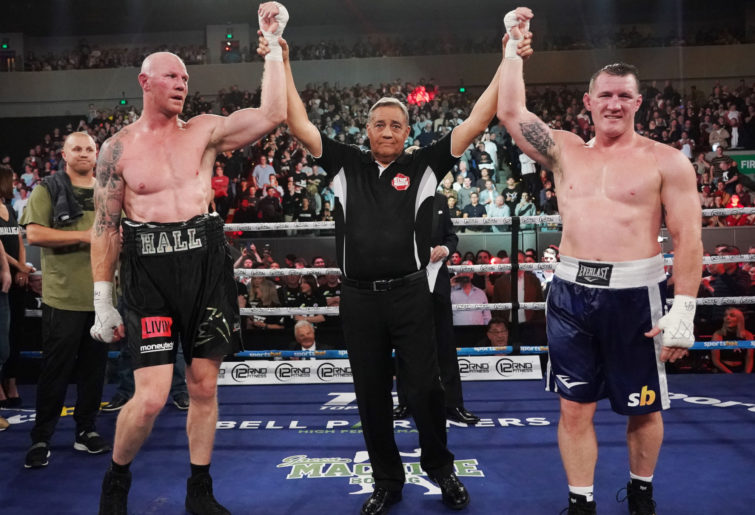 Paul Gallen and Barry Hall (left) react after a draw is given during the Code War Boxing night at Margaret Court Arena in Melbourne, Friday, November 15, 2019. (AAP Image/Michael Dodge)

Asked if he thought he could beat Williams, Hall said: “Absolutely”.

“I was retired at that stage from football and I wasn’t thinking about fighting them but as soon as I saw them fight, both of them, I thought I could beat those guys straight away, no shadow of a doubt.”

“I’m not Benjamin Button, I can’t turn back the age clock,” said Hall.

“But I’ve still got the skills. I’m fit, I’ve got the boxing knowledge, I’ve got a good amateur pedigree. I can absolutely hang with these guys.”

Turf War is promoted by Green Machine, led by four-time world champion Danny Green, together with Khoder Nasser’s SBW Promotions. It will feature an undercard with at least five professional bouts in the lead up to the highly anticipated main event.