Transfer rumours: Manchester's mediocrity sees Ronaldo on the move, Salah's future at Liverpool and the race for Dusan Vlahovic

Things have been a little silent over the last week when it comes to the future of Erling Haaland and where the most sought after signature in world football may be playing in 2022-23.

Borussia Dortmund still hold hopes of keeping the 21-year-old Norwegian in Germany in the short term, yet a logical move to the Premier League looms for a player hoping to test himself against the best in the business.

Should such a move eventually take place, the word is that Manchester City are in the box seat when it comes to acquiring a potential star of the most lucrative competition in the world. Even if the City Football Group are forced to wait until the summer, when Haaland’s £64 million release clause is activated, the sheer might of the winning reputation and financial clout of City may well see the soon-to-be crowned 2021-22 champions add another astonishing player to their ranks.

Like the majority of us who grew tired of watching Manchester United dominate English football in the late 1990s and early 2000s, so too has Cristiano Ronaldo had enough. Although this time, the frustrations felt by the Portuguese champion are not from excessive wins and a desire to see others challenge the Red Devils.

This time around it is Ronaldo’s sense of disappointment at having chosen to move to Old Trafford in the first place, and his obvious preference to be at a club with an actual chance of winning the biggest of trophies, that has seen the 36-year-old request his management engage in discussions with the club’s hierarchy.

In short, Ronaldo knows that he stands to win nothing with a club still fractured and rebuilding at best, and that a quick move elsewhere would be far more financially and historically beneficial to his cause.

In what could be the most bizarre and opportunistic coming together in the history of the game, Paris Saint-Germain seem to be the club most likely and the idea of Ronaldo and Lionel Messi taking to the field in the same kit would say a great deal about the joke that financial fair play has become. 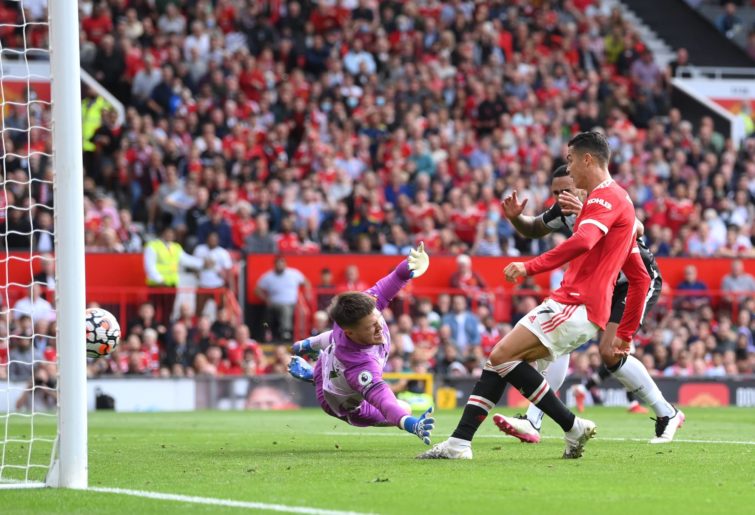 If Ronaldo leaves Old Trafford, where might he end up? (Photo by Laurence Griffiths/Getty Images)

No doubt, such an alliance would be astonishing, yet whether the game of football as a whole would benefit is seriously questionable.

Liverpool are reportedly keen to act on the £75 million release clause of Sevilla defender Jules Kounde. The Frenchman has undoubted quality and been a person of interest for clubs such as Real Madrid and Chelsea in recent months.

However, with the Reds still grinding out a deal that suits the club and Mohamed Salah’s wants, their focus is also towards the 23-year-old as a potential addition to a Liverpool defence that could do with some planning for the future.

Salah has been open in expressing that he demands nothing more than he deserves and has placed the potential agreement between the two parties in the hands of the club, stating simply, “They know what I want, I’m not asking for crazy stuff.”

If Liverpool FC don’t get a deal done, they would be fools of the highest order and the storm in the teacup that the entire saga has created is almost certainly a waste of time and conjecture. Surely the Egyptian genius stays at Anfield?

Any such deal looks a complicated one, with Zenit hoping for a replacement player, Lyon also interested in the Iranian’s services and a summer deal appearing a more likely prospect. Watch this space, as Juventus are in dire need of a replacement and further offers and approaches could well take place over the next two weeks.

In questionable rumours, Newcastle United have reportedly shown an interest in Monaco defender Benoit Badiashile, Arsenal continue to lurk around Serbian Dusan Vlahovic despite no official approach being made and Tottenham Hotspur has emerged as a new pursuer of Jesse Lingard, with West Ham’s plans for a repatriation thrown into disarray, should their London rivals enter the discussions and threaten to pinch a man many Hammers fans thought was destined to return to the London Stadium.

A likely free transfer looms for Lewis Baker after a disappointing time at Chelsea, with Stoke on the hunt for some reassurance in midfield. After eight seasons on loan, such a move could well be a calming one for the 26-year-old; another player caught up in the massive squads assembled by the big clubs and denied playing minutes at the top level.

Things continue to hot up during the winter transfer window, with clubs desperately seeking the perfect player to fill the gap they have identified. Be sure to stick with the The Roar as the trade period continues and as we bring you all the ongoing rumours and biggest deals in European football.