Who will be player of the Ashes series?

The series has been comprehensively won by Australia. Although, it was great to see determination from England to save the fourth Test.

In past Ashes series in Australia, there have been standout performances to earn player of the series honours.

Mitchell Starc I feel is a confident shout for player of the series, particularly if he can have success with the pink ball in Hobart. However, there’s talk he might be rested.

Starc got Australia off to the best possible start, dismissing Rory Burns very first ball of the series. He contributed 35 runs with the bat in Australia’s first innings, something he has done all series.

Starc’s best performance of the series was in Adelaide. He was without his two fellow pacemen in Pat Cummins and Josh Hazlewood. He led the attack brilliantly, taking six wickets, the most of any bowler for the match.

He was economical with the ball which is something you don’t often associate with Starc. Combine that with a total of 58 runs for the Test, and he was unfortunate not to get player of the match. Although he wasn’t at his best in Sydney, he performed well in Melbourne. A good performance in Hobart could see him be player of the series.

Marnus Labuschagne is another contender for player of the series. He is currently the series-leading run scorer with 286 runs, only ahead of Joe Root by nine runs. In what has been a quite low run-scoring series, Labuschagne batted exceptionally well in Brisbane alongside David Warner for 77.

In the second Test at Adelaide Oval, he had another commanding partnership with Warner. He rode his luck this particular innings, finally falling for 103. Throughout the second innings he backed it up with a 50. Although, his three scores since then have been 1, 28 and 29.

Warner, similar to Labuschagn,e started the series in red-hot form with back-to-back 90s. However, his highest score since then was a quick-fire 38 in Melbourne

Travis Head is in the reckoning for player of the series. Although, missing the fourth Test due to COVID-19 perhaps damages his chances.

A devastating 152 off 148 deliveries in the first Test took the game away from England.

The second innings in Adelaide, he did a similar thing, Australia had stagnated at 4-55. Head came in and played his aggressive style, which got Labuschagne going as well.

Scott Boland has without doubt been the story of the series, his figures of 6/7 at the MCG were unbelievable. Although, he showed at the SCG that those figures were no fluke. When he was bowling in Sydney you felt he could jag a wicket at any time.

His combined figures for the game: 38 overs, 7 for 66 including 17 maidens. Who knows, if he plays well in Tasmania, he could claim player of the series!

Joe Root wants to continue leading England, and the lack of a suitable replacement means it’s likely he will, but his countrymen are far from convinced after his team’s “ghastly” and pathetic” collapse in Hobart. 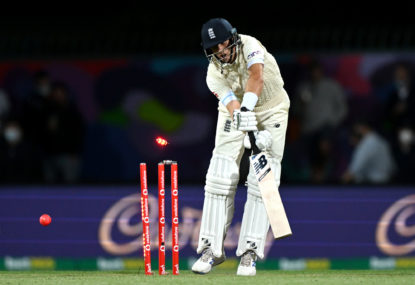 Pat Cummins admits he had concerns about being Australia’s first full-time bowling captain, but woeful England did everything possible to help ease his way into the role.

Former England captains Michael Vaughan and Ian Botham were distraught after the tourists’ dreadful collapse in Hobart saw them crash to a 4-0 defeat. 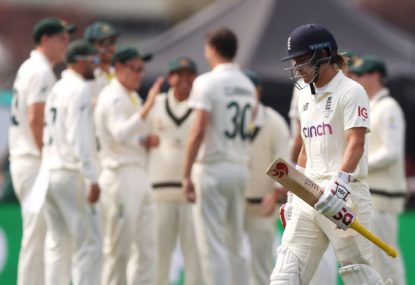