The Anfield fixture had initially been scheduled as the second leg, but last week’s match was postponed due to a number of coronavirus cases within Liverpool’s squad.

Arsenal were thrashed 4-0 in their previous trip to the ground in November but a depleted Gunners side ensured the second leg will start on level terms following a stoic display, which was complicated by Granit Xhaka’s 24th-minute red card.

???? Minamino misses an absolute SITTER! How did the @LFC star miss that?!?!

It remains goalless at Anfield as we approach stoppage time

Missing Mohamed Salah and Sadio Mane due to the Africa Cup of Nations, Liverpool toiled in front of a packed Arsenal defence and when a golden chance did finally come, Minamino fluffed his lines.

Already shorn of the injured Emile Smith Rowe and Martin Odegaard, who had tested positive for COVID-19, and Thomas Partey who was on Ghana duty in Africa, Arsenal were dealt another blow when Cedric Soares limped off in the 11th minute. 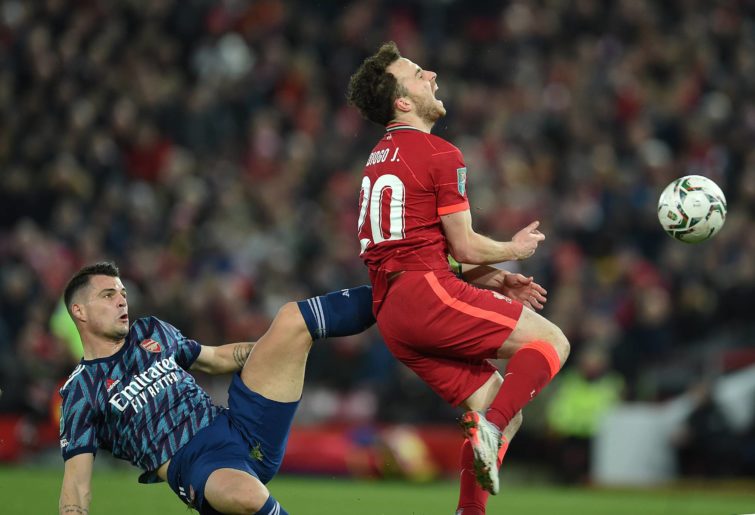 Granit Xhaka of Arsenal takes out Diogo Jota of Liverpool and gets a red card during the Carabao Cup Semi Final First Leg match between Liverpool and Arsenal at Anfield on January 13, 2022 in Liverpool, England. (Photo by John Powell/Liverpool FC via Getty Images)

The visitors would surely have been behind if not for Ben White’s intervention, with the defender just managing to deny Roberto Firmino a tap-in.

Though they weathered an early storm, Arsenal’s task was made harder when Xhaka received his marching orders for a desperate, high swipe at Diogo Jota just outside the Gunners’ area.

Minamino, Liverpool’s hero from the quarter-final win over Leicester City, almost caught out Aaron Ramsdale early in the second half with a long-range cross-shot that dropped just wide.

Alisson had to be alert to thwart Bukayo Saka at the other end in a rare Arsenal attack, but Minamino should have won it late on.

???? WHAT A CHANCE! @Arsenal nearly takes a shock lead through @BukayoSaka87, but @Alissonbecker makes the save!

Ramsdale flapped at a cross and left his goal gaping, yet Minamino’s first-time effort flew high over the crossbar.

Reds boss Juergen Klopp told Sky Sports: “I thought we started well, how we wanted to start. I would have preferred to score a goal rather than them getting a red card.

Arsenal boss Mikel Arteta claimed he had not seen a replay of Xhaka’s sending-off – the player’s fifth since joining in 2016-17.

???? RED CARD! @Arsenal is down to 10-men and guess who! Granit Xhaka sees red for this challenge and the Gunners are up against it at Anfield.

“They showed great fight, determination and brotherhood. They never gave up even though it’s extremely difficult against this opponent,” he told Sky Sports.

“I said to the players before the game that you have to have a certain attitude and in difficult moments you have to react, and I think the boys did that very well. We played the game we had to play.”