'It's not a creche!' Former greats say Langer must be retained as coach, slam player discontent

Former greats Shane Warne, Adam Gilchrist and Michael Vaughan have urged Cricket Australia to retain coach Justin Langer, despite rumours he could be out the door following the much-publicised rift with the players.

Reports of player discontent with Langer’s style of coaching have dominated discussion for the past 12 months; however, the trio have blamed the players’ attitude for the feud as much as the coach’s own faults.

“I’ll be totally honest with you: I do think there’s too much player power across the board,” he said.

“I hear it too often in the English game across the counties, across the national teams, I hear it in the franchise system that all the players don’t like the coach because it’s not a friendlier atmosphere and it’s not nice.

“High-level sport’s about winning. I always believed as a sportsperson, sometimes, and not every character, but there’s a lot of characters in professional sport that need to be on edge. That edge is created by the captain, by the coach, sometimes by the environment, and it triggers you to a better performance.

Vaughan compared Langer to legendary Manchester United coach Alex Ferguson’s famously tough style of coaching, saying that ‘being on eggshells’ is an important way to ensure players get as much out of themselves as they can.

“He [Alex Ferguson] believes that to play at the highest level, it’s important that you’ve got that motivation, and sometimes that motivation comes from being on eggshells within the group,” Vaughan said.

“That means that you arrive at every training session, you have a point to prove. If you don’t have that point to prove, sometimes you can get complacent.

“I’ve never been in a dressing room with Justin Langer, so I can’t ultimately say, but from me looking from the outside, he looks to me like he creates an atmosphere that you might be on eggshells, and you might have a point to prove.

“He’s probably not going to blow smoke up your backside every day, but is that a bad thing?”

Warne, regularly seen as one of the greatest captains Australian cricket never had, agreed, pointing to Langer’s recent successes during the Ashes and the T20 World Cup as deserving of a new deal.

“How do you judge a coach? That’s the hardest thing; how would you judge a coach’s performance to say they’ve made the players better, they’ve helped Australian cricket. I think Justin Langer gets a tick on all of that,” Warne said. 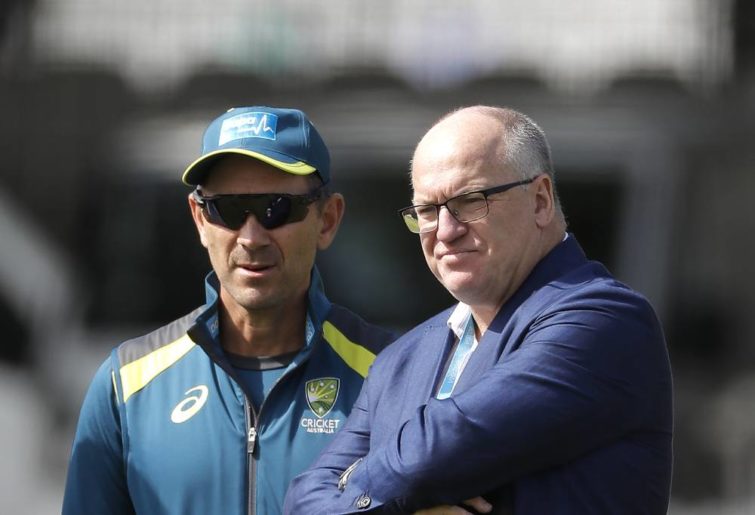 “He’s just won an Ashes series, he’s just won a T20 World Cup. If the players don’t like him or don’t want him there, I thought that was the conversation that’s been had.

“It seems to me that Australia have turned it around a little bit, the cricket they’ve played here, the cricket they played in the T20 World Cup. For me, I don’t know what everyone’s waiting for, he should be signed in my opinion. He’s done such a good job.

“On the other side of the coin, coaches also have a shelf life because they can only inject so much. He’s been there for four years.

“For me, I don’t know what they’re waiting for.”

Vaughan also noted that Langer’s demeanour has noticeably changed from his famously prickly attitude in years gone by, while saying that the circumstances of his arrival at the helm – in the aftermath of Australia’s infamous ball-tampering scandal in early 2018 – required a harder approach.

“He’s evolved into a different style of coach. You can clearly see that,” Vaughan said.

“He was smiling- we didn’t see smiling a couple of years ago. When he took over, Australian cricket couldn’t smile.

“He’s created that, and at times when you’re doing that you’re not going to be everyone’s cup of tea. You might upset the odd one or two.”

“If some of the players don’t like you, I think that’s okay. You’re not there to make friends,” Warne added.

Warne also asserted that should Australia part ways with Langer, England would be only too keen to ‘snap him up’, a claim Vaughan was quick to endorse.

“I would certainly be trying to get on the phone to Justin Langer to potentially have him as a consultant if the opportunity came in English cricket,” he said.

While less forceful with his opinion than Warne and Vaughan, Gilchrist was similarly full of praise for his former Test and Western Australian state teammate Langer; saying the ‘honest feedback’ he has received from the players has borne fruit.

“I think he’s ticked all the boxes that were required of him, what he was brought in for,” Gilchrist said.

“He seems to be showing signs of wanting to change and evolve with the honest feedback that he was able to eventually solicit through the players rather than through the media.”

Langer’s predecessor as coach, Darren Lehmann, has urged the 51-year old to leave of his own accord when his contract expires at the end of the upcoming tour to Pakistan, saying ‘he will burn out’ if he goes on too long.