With so many defunct teams to get through, we’ll work through them in the chronological order in which they departed the competition. In Parts 1 to 6 we looked at 12 clubs that disappeared from view up to 1998, including St George, who departed in the first merger. Today we’ll look at the Illawarra Steelers, the other victim of the first NRL merger.

Illawarra entered the competition in 1982 and departed at the end of 1998. The Illawarra region has always been a rugby league heartland and a breeding ground for some of the best players to play the game. Well before they entered the NSWRL, players from the area had been making their way to the Sydney clubs to seek their fame and fortune. Players of the calibre of Bob Fulton, Graeme Langlands, Ian Moir, Steve Roach, Ron Costello, Harry Wells and Les Hanigan all hail from the Illawarra and all went on to represent Australia. 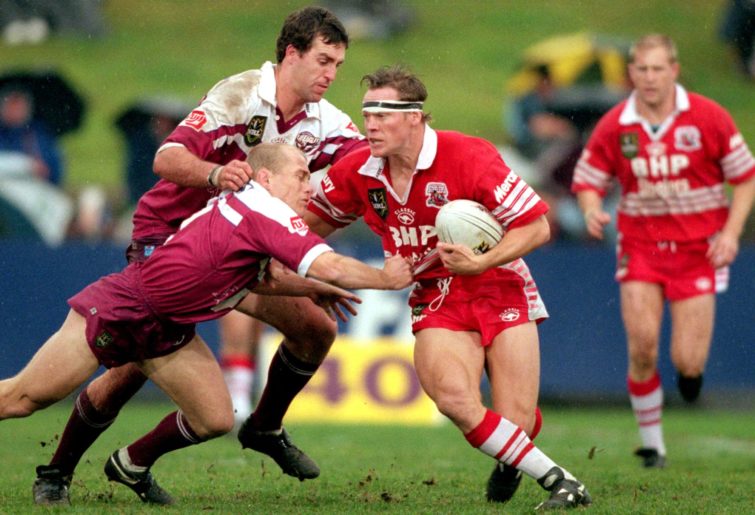 Illawarra made several unsuccessful attempts to join the NSWRL dating back as far as the 1950s, and they eventually got their way when they were admitted for the 1982 season along with Canberra. They initially encountered some financial difficulty but eventually secured the backing of BHP, which saved the club from early ruin.

Their first season saw them struggle under coach Allan Fitzgibbon, and they won just six games to finish in 13th place and just ahead of wooden spooners Canberra. They crept one place up the ladder to 12th in 1983 and then seemed to hit their straps in 1984, finishing just one win outside of the top six and a semi-finals berth. This turned out to be a false dawn, however, and they then won back-to-back wooden spoons in 1985 and 1986 and then their third wooden spoon in eight years in 1989.

Things picked up for the Steelers in the 1990s, particularly with the arrival of new coach Graeme Murray in 1991, when they lost only nine of 22 games to once again finish just one win away from a finals berth. Players of the calibre of David Riolo, Brett Rodwell, Alan McIndoe, Dean Schifilliti, Neil Piccinelli, Rod Wishart and Paul McGregor had emerged in what was now a more formidable Steelers team with a very good home-ground record.

Illawarra made the finals for the first time in 1992, finishing third on the ladder just behind St George and Brisbane. They defeated the Dragons 18-16 in Week 1 of the finals thanks to the boot of Wishart but then went down to Brisbane in Week 2 before controversially being eliminated 4-0 by the Dragons in the preliminary final, a Ricky Walford try being the sole points in the game.

Their next and last taste of semi-finals football came in 1997 under coach Andrew Farrar. They finished sixth only to be eliminated by the Gold Coast Chargers 25-14 in Week 1 of the finals.

Come the end of 1998 the club was struggling financially, and the NRL’s incentive to reduce clubs by mergers became too appealing for the Steelers to continue to stand alone. An offer to join the neighbouring St George club in rugby league’s first-ever joint venture was accepted at the end of the 1998 season, forming the St George Illawarra Dragons, and the Steelers were gone.

Next we’ll take a look at the North Sydney Bears and the doomed Northern Eagles merger.