The Roar
16th January, 2022
200
Join the conversation
Advertisement
Write for The Roar

Novak Djokovic has broken his silence after his effort to overturn his visa cancellation at the Australian Federal Court was denied, saying he is ‘extremely disappointed’ to be barred from the Australian Open.

The world number one’s appeal was struck down unanimously by the court, making it all but impossible for any further challenges.

He is set to be deported from Australia as early as Sunday night, while his spot in the Australian Open draw will be taken by a lucky loser.

To rub further salt into the wound, Djokovic has been ordered to pay costs for the legal challenge.

Djokovic released a statement to the media on Sunday night, where he expressed a wish for the tennis world to ‘now focus on the game and tournament I love’.

“I will now be taking some time to rest and to recuperate, before making any further comments beyond this,” he said.

“I am extremely disappointed with the ruling to dismiss my application for judicial review of the decision to cancel my visa, which means I cannot stay in Australia and participate in the Australian Open.

“I respect the Court’s ruling and I’ll co-operate with the relevant authorities in relation to my departure from the country.

“I am uncomfortable that the focus of the past weeks has been on me and I hope that we can all now focus on the game and tournament I love. I would like to wish the players, tournament officials, staff, volunteers and fans all the best for the tournament.

“Finally I would like to thank my family, friends, team, supporters, fans and my fellow Serbians for your continued support.

“You have all been a great source of strength to me.”

Chief Justice James Allsopp confirmed that Immigration Minister Alex Hawke’s decision to cancel Djokovic’s visa was sound, saying it is ‘no part of the function of the court to decide upon the merits or wisdom of the decision’.

The three judges reached a unanimous decision, and will reveal their full decision at a later date.

Judge makes clear that this case is not an appeal on @AlexHawkeMP – but a application for Court to review the decision for lawfulness and legality of decision. @10NewsFirstMelb #springst #auspol #djokovic

Earlier, lawyers for Djokovic argued Hawke has misinterpreted media reports about the tennis star’s views on vaccination, and the level of support he receives from anti-vaxxers.

Djokovic’s lawyers said Hawke had not provided any evidence that his presence in Australia will encourage anti-vaccine sentiment.

The court case was wrapped up less than 24 hours before the start of the Australian Open, where Djokovic is top men’s seed. The first day playing scheduled was delayed as the court case proceeded.

His visa was cancelled for a second time late on Friday, with Hawke citing “health and good order grounds”.

Djokovic’s lawyers argued the cancellation of the tennis player’s visa for the second time was not legally valid. They said it was not open for the minister to find Djokovic was opposed to vaccination, that there was no evidence the tennis star’s presence would foster anti-vaccine sentiment, and that Hawke did not consider the effect of cancelling the visa on stoking that sentiment.

The Immigration Minister said Djokovic’s case failed on all three grounds, and lawyers argued Djokovic was “an icon for the anti-vaccination groups” and there was clear evidence of his views.

Djokovic’s lawyer, Nick Wood, told the Federal Court that Hawke had used reporting by the BBC and other outlets to support his claim Djokovic was opposed to vaccination. 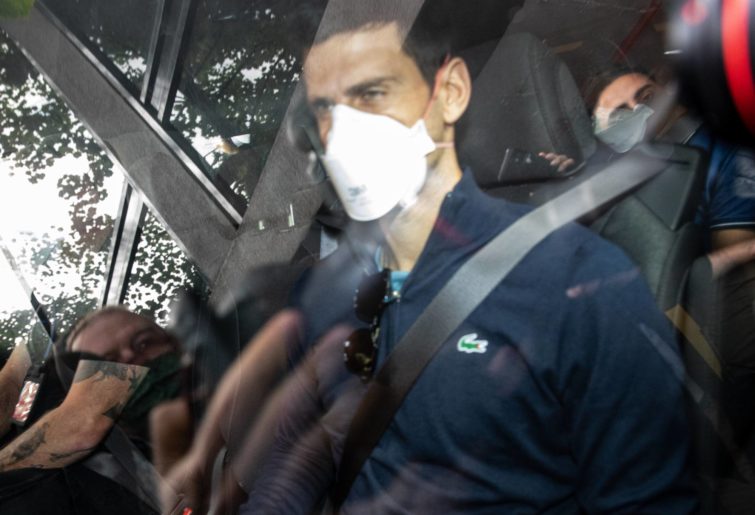 But he said the minister ignored parts of the BBC article which suggested the cancellation of Djokovic’s visa could lead to more unrest within anti-vax circles.

Djokovic’s lawyers argued the minister should have considered the effect of cancelling the visa on anti-vaccination sentiment, rather than just the effect of allowing him to play.

The Immigration Minister’s lawyer, Stephen Lloyd, told the court it was not just media reports which demonstrated Djokovic’s attitudes towards vaccination.

“That he’s still unvaccinated reflects a choice on his part or remain unvaccinated when he could be vaccinated,” Mr Lloyd said.

He referred to an interview Djokovic did with L’Equipe two days after testing positive in December.

“Even when he knew he was infected and had received a positive test he undertook an interview and a photo shoot.”

Chief Justice Allsop said “it would be clear to anyone with common sense that cancelling the visa would cause overwhelming discord”.

Djokovic lost because the law was designed to make the Minister’s decisions immune from judicial review. That is not a good thing.

#Djokovic knew the risk he was taking. Hence the lying on the visa exemption. No one can say he isn't getting what is deserved. #AusOpen

The end of a week-long, political circus – all avoidable had Morrison not issued #Djokovic a visa in the first place. He then tries to look like a hairy chested Howard: ‘we decide who comes here, nobody else’. Meanwhile hospital crisis off the front page. https://t.co/6TNj4Pz9Hl

The right decision. But one that should have been made weeks ago without the unnecessary drama. Let the Oz Open begin. #Djokovic #AusOpen