'What the f--k are we doing?' Kyrgios slams government, the public, fellow players in explosive Djokovic defence

The Roar
15th January, 2022
92
Join the conversation
2437 Reads
Advertisement
Write for The Roar

Nick Kyrgios has thrown his support behind embattled world number one and long-time rival Novak Djokovic, following the 20-time grand slam champion’s return to detention amid his ongoing battle with the Australian government.

Speaking on his No Boundaries Podcast, Kyrgios doubled down on his earlier defence of the Serbian in even more explosive style, describing the situation as ‘a s–tshow’.

The divisive Australian slammed not just the government’s handling of the fiasco, but the media for pouring fuel on the fire, and the Aussie public as well for their unwarranted hatred of Djokovic.

It’s just a s–tshow now. I’m waking up, and we’re just literally reading the media, and just something new every day. I feel like we’re just trying to find things now that aren’t right,” Kyrgios said.

“I just think it’s crazy. I feel so sorry for him… the pressures that he has are so unique; he’s going for 21 slams, being Novak Djokovic, preparing is already enough.

“It’s an absolute s–tshow in my opinion. How we deal with this stuff is just so embarrassing, to be honest.”

Kyrgios’ endorsement comes in stark contrast to his scathing critique of Djokovic following his decision to stage a non-COVID safe tennis tournament in the Balkans during the height of the pandemic in mid-2020, where he described him as a ‘bonehead’.

Kyrgios had also blasted Djokovic for having ‘a sick obsession with wanting to be liked’ in an explosive interview with tennis journalist Ben Rothenberg in 2019. However, it appears now his opinion of the world number one has come full circle.

“He’s not doing anything to anyone. He just wants to come here, play the Australian Open,” Kyrgios said on his podcast.

“It’s very important for him to be here and play for the people. We want sport. Sport brings people together through struggle.

“The media has just ruined, in my opinion, the Australian Open, divided everyone, and it’s not what sport’s meant to do. It’s meant to bring people together.

“Fans from around the world are supposed to be competing with one another, but having fun at the end of the day.

“Now you’ve got people rioting in Serbia, and it’s just like: what the f–k are we doing?” 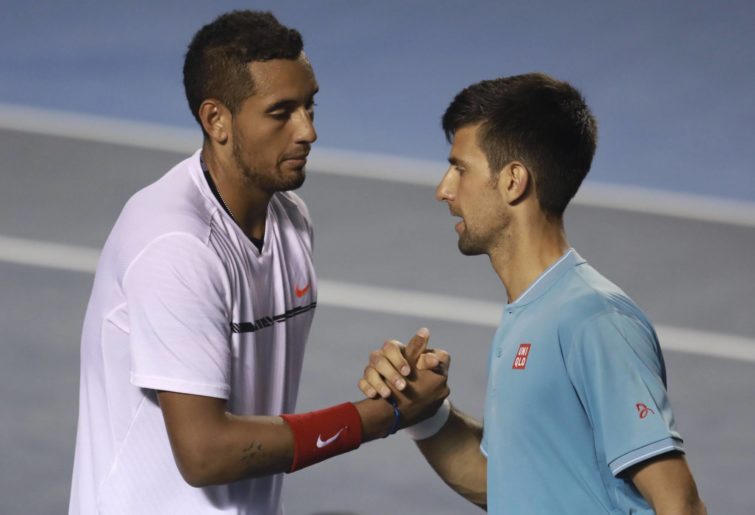 Kyrgios, who has fallen to a ranking of 114th in the world after an injury-interrupted 2021, says this year’s Australian Open has already been ‘tarnished’ by the Djokovic drama.

“I feel like everyone’s just going to remember this Australian Open as the Novak saga,” he said.

This Hawke guy’s [Immigration Minister Alex Hawke] like, ‘He’s a threat to our borders’. And I’m just like, ‘Well, no he’s not.’

“We’re treating him like he’s a weapon of mass destruction. He’s literally here to play tennis.”

Kyrgios also slammed what he described as the ‘mistreating’ of Melburnians after two years of COVID-enforced lockdowns, but says such feelings of resentment are no excuse for mistreating Djokovic.

“I feel like I understand their [Melburnians’] anger towards him [Djokovic], being not vaccinated and having the medical exemption. I understand that side.

“But at face value, you just say, ‘Okay, he’s done what he’s needed to do, he’s got his paperwork, he’s okay to be here’. Now I feel like the people, all their anger no matter what Novak does or for what reason… they’re just going to say, get him out of our country.

“I understand people are angry, and we understand that yes, letting some people in, the country was always going to bring up some sort of argument.

“But this was supposed to be a special time for people in Melbourne – the Australian Open’s back on! Now it’s 50 per cent crowd capacity, Novak’s not going to be there, Roger’s [Federer] not here.

“It’s like, what is our government or the rules actually doing for sport now? It’s not bringing people together. It’s crazy.”

The Aussie maintained the slam needs Djokovic participating, comparing himself to Djokovic for the pair’s desire to entertain fans above all else… even, perhaps, winning.

“People think he’s selfishly here; he literally is playing tennis at the highest level for the fans, and for millions of people around the world,” Kyrgios said.

“As an athlete who genuinely just wants to go out there and give people a show, I couldn’t really care whether I win or lose.

“Yes, I obviously want to win, but if I lose like against Thiem last year, after four hours and it’s a mad show, that’s why I play. And I feel like Novak is a big part of that.”

Kyrgios also sympathised heavily with the strain the saga has put on Djokovic and his family, who have led calls for his release from their home in Serbia.

“This is mental health club s–t now. Imagine how drained and how stressed his family would be,” he said.

“It’s just a f—ing joke, man. Either tell the guy to get out, or you’re in our country now, he’s been here preparing, let him play. And then he’ll leave anyway! As soon as the Australian Open is done, he’ll leave!”

Kyrgios was critical of players coming out against Djokovic, most notably Rafael Nadal and Stefanos Tsitsipas.

Tsitsipas described Djokovic’s stance as ‘mak[ing] the majority look like fools’, while Nadal has called for Djokovic to accept ‘consequences’ for his refusal to be vaccinated. Kyrgios wasn’t impressed with either.

“It pisses me off how Tsitsipas, Nadal and stuff – obviously everyone’s got their opinion, and that’s fine – all have to speak out about it when they get asked, but I feel like we’re only treating him like Novak Djokovic, not like a human now,” he said.

“Imagine how he’s feeling. He probably just wants a little bit of support now from other players.

Djokovic’s chances of appearing at the Open aren’t closed yet, with his legal team still listed in the tournament’s men’s singles draw as of Sunday morning. Should he miraculously be cleared to play at Melbourne Park, Kyrgios says a win would be ‘f—ing awesome’.

“I honestly want him to f—ing win the event,” he said.

“I want to walk around with Novak’s mask on my face.

“I just think, if Australia as a whole dealt with COVID better… if the people of Melbourne didn’t get so f—ed over with everything in these rules, I don’t think this would be such a big issue. Not as big as it is now; this is insane now.