When you’re hot, you’re hot and when you’re not, you’re not
There were some questions marks over how Sydney FC would compensate for the loss of Remy Siemsen and Cortnee Vine.

Before Sunday’s game against Canberra, the pair accounted for 8 of the Sky Blues’ 17 goals. And while Ante Juric had signed the likes of Maria Jose Rojas and Paige Satchell presumably with Matildas call ups in mind, now was the time for them to step up.

Step up they did with Sydney dismantling Canberra 6-0; it was United’s worst ever A-League Women’s loss. Rojas nabbed herself a hat trick, while Princess Ibini, Rachel Lowe, and Ally Green all heaped on the misery with goals of their own.

Rojas’ performance told the tale of Sydney’s afternoon. She was asked to take on the role of the free-scoring strikers she’d been called in to replace and she took on the role with aplomb.

While the penalty she earned appeared a bit soft, there was no doubting her strong finish from the spot.

However, it was her second and third goals which really told the story of the game. While Sydney weren’t convincing in the first half, a champion team finds a way which is exactly what the Sky Blues did. When the chips are falling your way, you have the rub of the green, and the football Gods are on your side, everything looks good.

Rojas’ second goal was an audacious chip that could have just as easily bounced off the far post and back into the field of play. Instead it hit the inside of the frame and fell into the back of the net.

Princess Ibini was through on goal with Canberra defender Chloe Middleton for company and goalkeeper Keely Richards bearing down. Even with a shove from Middleton which forced Ibini to stumble and eventually fall flat on her stomach, she still toe poked the ball home.

And while Ally Green has cheekily claimed her cross-shot was absolutely deliberate on Twitter, her ball in from the left caught the wind and found itself curling and flying beyond the grasp of Richards.

For Sydney, everything they touched turned to goal and the form side of the competition proved that when you’re hot, you’re hot.

The flipside of this is that when things aren’t going your way they really don’t go your way and that was the story of Canberra’s afternoon.

While Covid kept the likes of Grace Maher and Emma Ilijoski from the team and Karly Roestbakken was away in Dubai with the Matildas,

Canberra simply couldn’t catch a break. And that’s what added to the intrigue of this clash.

Where Rojas’ chip landed where it was meant to, Allira Toby scuffed a shot well wide without forcing Jada Whyman to make a save. Where Green’s flukey shot came off, Michelle Heyman directed her attempt right at Whyman when you would have expected her to score. 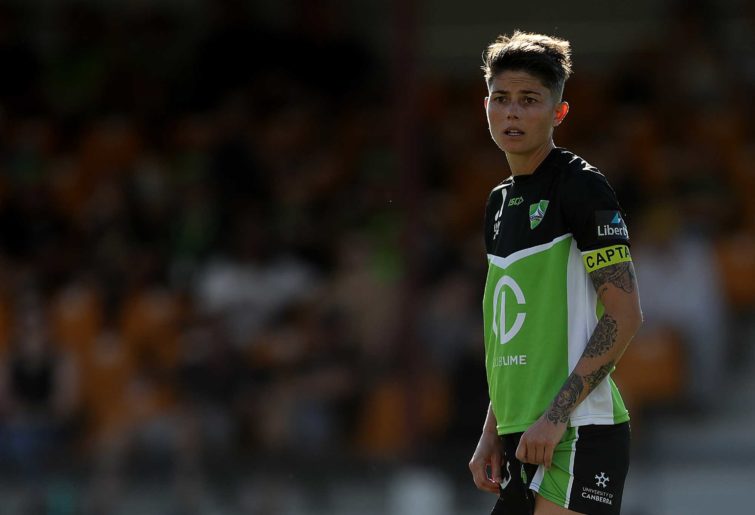 But no moment better summed up where these two teams are at than Sydney’s fourth goal.

A Sky Blues corner was whipped in with Rojas standing, waiting, at the far post. In front of her, one Canberra player appeared to be pushed and fell. That in turn took out another Canberra player.

And by the time the ball travelled its way to the unmarked Rojas to tap in, a third green shirt was added to the pile of players in the six-yard box.

It was the kind of moment that could have had Benny Hill music playing in the background, such was the calamity and comedy. But it once again spoke volumes of the good form Sydney is in and the unfortunate, unlucky, and poor form Canberra is in.

Now all eyes turn to Sydney’s clash with Melbourne City, while Canberra will attempt to regroup once again and see if they can finally get their season started against Victory.

The kids are alright
It was heartbreak for the Wellington Phoenix as Katrina Gorry slotted home her penalty in the 87th minute to put Brisbane Roar up 3-2.

It was an important win for the Roar – and a crucial penalty for Gorry who wrote on social media that she’d been thinking about the penalty she missed at the Rio Olympics five years ago and had “never felt confident to step up to take another one” until yesterday.

But for at least a half the Nix were dreaming of a maiden win. While score lines have suggested that the Phoenix are easy beats, the performances have told a different story, and on Sunday afternoon the scoreboard and the performance appeared to align.

Alyssa Whinham’s opener was an excellent curled effort from 12 yards but the goal itself was almost secondary to her reaction. The 18-year-old scored what was the Phoenix’s second ever A-League Women goal and the look on her face said it all.

In between bringing her hands to her mouth in disbelief and being unsure as to what to do with her arms, it was the purest, most wholesome reaction to a goal.

Grace Jale added a second with a much more understated celebration but undoubtedly no less pride. It was a reminder once again that the kids in this league are more than holding their own. And that is the case across the competition, not just in Gemma Lewis’ young Phoenix squad.

Maja Markovski’s confident penalty which was struck powerfully into the roof of the net and was accompanied by a familiar celebration was a statement from the young striker and an important win for Melbourne Victory over Western Sydney.

But even in that game the performances of the likes of 16-year-old Alana Murphy and 15-year-old Alexia Apostolakis impressed. Then there was the classy finish from 18-year-old Hana Lowry for Perth Glory in their 1-1 draw with the Jets.

Seventeen-year-old Naomi Chinnama stepped into the Melbourne City line up to replace Winonah Heatley who was in Matildas camp and helped her side keep Adelaide out in a 1-0 victory.

Across the league, these players are being given opportunities and are showing that they aren’t taking them for granted.